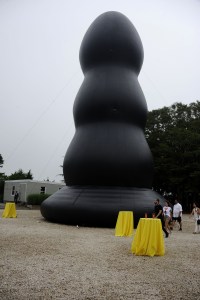 “RAIN OR SHINE!!” read the first line of the invitation for the Watermill Center’s summer benefit, which felt prophetic Saturday, when “shine” never came into the equation. The foreboding weather was not the ideal setting to view a lot of the outdoor performances, tucked away in the woods surrounding the center, but it did make the 60-foot inflatable butt plug by Paul McCarthy look especially menacing.

“I always look on the bright side,” said RoseLee Goldberg, the founder of Performa. “Pouring rain is fabulous. It gives a terrific concentration, brings everyone together.”

“The rain makes it more memorable,” agreed W editor Stefano Tonchi and then nodded to Bill Cunningham, scurrying behind him with a camera barely shielded by an umbrella.  “As Bill Cunningham has said, it will make for better pictures.”

Guests huddled near the dong monolith, in a tent that housed the work for the night’s silent auction. In the tent’s open center, a woman in a wedding dress writhed to no music on a pile of dirt that turned into a puddle of brown muck, her dress matching the mud as the evening went on.

Children wearing anime-inspired costumes designed by Misaki Kawai walked casually among the damp crowd. When asked what her costume was supposed to be, one of the performers responded, “I’m not sure.” Her arms were held aloft by the outfit, like a bird’s wings. For flight? “And high fives,” she said. We obliged.

Elsewhere, a female performer donned a magnetic suit of armor and several shirtless men threw nails at her. Another performer, dressed for j-pop used a leaf blower to inflate a giant white balloon until it popped. Out in the woods, a man in all black and a ninja mask, one of several, stood next to an inverted neon pentagram. He moved his hands reflectively and made it look like he was rotating the star through telekinesis. MoMA PS1 director Klaus Biesenbach said he often wished there was a forest around his museum.

But for Paul Schimmel, the recently ousted chief curator at the Los Angeles Museum of Contemporary Art the main draw was an exhibition by Mike Kelley, who died last year, inside the plant. There were several video works on display there, as well as the so-called Kandor works, inspired by the Superman comics.

“I was looking at this very early video of his,” said Mr. Schimmel, who is co-director of the Mike Kelley Foundation, “and it’s filled with kind of a twisted spirituality, a dark sense of what secrets lie underneath the whirlpool of life, and it was hysterically funny. And Mike was all of those things.” Asked for his thoughts on MOCA’s director, Jeffrey Deitch, and the recent artist resignations from the museum board, Mr. Schimmel shook his head. “I ain’t doin’ it.”

The rain didn’t stop a performance by The Voluptuous Horror of Karen Black—an art project by Kembra Pfahler masquerading as a punk band, which, incidentally, has played at Mr. Deitch’s downtown gallery. Many of them were completely naked, their bodies painted red, green or blue and their hair teased out, seemingly immune to the weather. They performed in front of a large sculpture of a red penis. At the end of their set, they picked up the sculpture, carried it over their heads to Mr. McCarthy’s butt plug and held it there for a while, pointing it at the crowd underneath the tent, the red paint starting to bleed off in the weather.