Assembly Speaker Sheldon Silver’s office is not impressed with James O’Keefe’s latest hidden camera video. Mr. O’Keefe, a controversial conservative activist, posed as an executive with a do-nothing company in the clip and met with a pair of union officials in New York asking whether they could use their political connections to help him secure environmental grants for simply digging and re-filling holes in the dirt. The men Mr. O’Keefe spoke to, John Hutchings of the Laborers’ International Union of North America, former assemblyman Ronald Tocci and Mr. Tocci’s brother, Anthony Tocci, describe how they have lobbyists who help them “push our agenda through.” They specifically name several elected officials they claim are friendly to them; Senators Chuck Schumer and Kirsten Gillibrand, Congressmen Eliot Engel and Jerry Nadler and Assembly Speaker Sheldon Silver. Mr. Silver’s spokesman, Michael Whyland, told us Mr. O’Keefe’s video shouldn’t be treated as serious journalism.

“This is not reporting. This is not journalism. It doesn’t even rise to the level of a comic strip. This is the kind of stuff that gives honest reporters a bad name,” Mr. Whyland said.

In the clip, Mr. Hutchings boasts about his ability to get things done in Albany.

Though he says he has a lobbyist who “takes care of” Mr. Silver’s colleagues in the Assembly, he claims the Speaker approves funding, but doesn’t get involved in the details of the projects that receive grants.

“Shelly Silver wouldn’t say specifically, ‘Fill the dirt there.’ He would have to approve a grant to do that type of stuff, then we’d have to find places where to dig,” Mr. Hutchings says. “He doesn’t want to get involved in picking, that’s where they get into trouble.”

Mr. O’Keefe became famous after his investigation into ACORN that resulted in organization losing federal funding. He has also targeted Planned Parenthood and NPR, among others. Mr. O’Keefe’s videos have been criticized by those who say he uses manipulative editing techniques in the partisan ambush attacks. In 2010, he was arrested and accused of trying to hack into the phone lines in the office of Democratic Louisiana Senator Mary Landrieu. 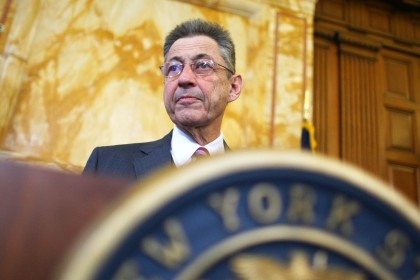