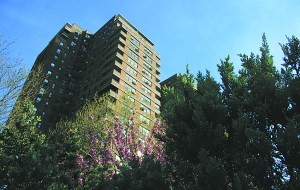 A few weeks ago, the Lower East Side art dealer Joel Mesler, the co-proprietor of Untitled gallery, was showing a few guests his new apartment, a two-bedroom on the sixth floor of the Seward Park building, part of the Cooperative Village on Grand Street and Essex. Standing on his balcony, smoking and admiring the old Jewish Daily Forward building, he listed off some of his new neighbors, all people with long careers in art.

This did not exactly come as a surprise. The art world has a tendency to stick together, like velcro or a pack of wolves. Galleries go where the other galleries are. Dealers hold exhibition openings on the same nights as other dealers, then everybody convenes at the same bar or restaurant afterward. People in the art world date and marry each other. They share everything from artists to coke hook-ups; that many of them should be living in the same building is only natural.

“Since the art world tends to ghettoize itself anyway, it works out perfect,” Mr. Mesler said. The co-op’s art population has not yet hit what Mr. Mesler calls “critical mass.” If it does, he said, “I guess what you’ll do depends on your disposition.”

The appeal that Seward Park and its sister building East River, which together make up the more recent, art deco section of Co-op Village, hold for the art world is a matter of convenience and coincidence, though people have arranged themselves roughly according to rank (almost symbolically, Klaus Biesenbach, the Museum of Modern Art’s chief curator-at-large and the director of MoMA PS1, occupies the penthouse at Seward; artists, dealers and gallery directors are quite literally beneath him). The buildings were built in the 1950’s as part of a precursor to the Mitchell-Lama Housing Program, which developed affordable housing for middle-income families. They were put up by trade unions and, until 2000, owners could sell their apartments only if they sold the shares back to the co-op at little or no profit. From the outside, they resemble any other housing project in the city, but on the inside they are roomy with lots of natural light. The buildings were deregulated between 1997 and 2000, but prices have remained low. A two-bedroom in Seward was recently listed at $510,000, still way below the average for the neighborhood and for Manhattan in general. This, in the words of Seward resident Benjamin Godsill (a specialist at Phillips de Pury), draws in a number of “low-end yuppies, which a lot people in the arts are.”

The recently voted-in president of Seward Park’s co-op board, Wei-Li Tjong, grew up in Seward before the building was deregulated. After the underlying mortgage of Seward was paid off in the late ’90s, there was an option to reconstitute the building as a co-op without pricecaps on the property, which was put to a vote and passed. This roughly coincides with the time just before artists and art dealers started to look to the Lower East Side as an alternative to rapidly expanding Chelsea.

“There can be some tension between the original tenants who are now senior citizens and the new professionals who want new kinds of amenities,” Mr. Tjong said. “But there are many types and ways of living. I think we have a museum director living here who completely gutted his apartment, including kitchen appliances. He just made a big white box space.”

That would be Mr. Biesenbach, who declined to comment for this article, but who told The New York Times earlier this year, “I hate design. It’s a little bit of curatorial disease. I like to reduce everything to its original surface.” According to that article, he has introduced a sofa and a table into his stark environs.

There is, Mr. Tjong said, “a frontier attitude to gentrification,” which makes Mr. Biesenbach, a resident at Seward since 2007, a kind of adventurer. The real art world pioneer, though, is Cristopher Canizares, an associate director at Hauser & Wirth gallery who moved to Seward in 2005. “I like to think of myself as the first,” he said. At the time, “I couldn’t even envision what was south of Delancey. It was like a waterfall in my mind.”

Still, the buildings have not quite become an art world dormitory, with gallery owners knocking on each other’s doors for a cup of sugar. Encounters are slightly more random. The dealer James Fuentes, who lives in the East River building with his wife, Branwen Jones, the senior director at Andrea Rosen Gallery, said he once ran into Mr. Biesenbach at the bike shop down the street; the two exchanged a knowing glance and went about their business. Heather Hubbs, the founder of the New Art Dealers Alliance, was having a meeting about a year and a half ago with her members at the Lower East Side’s Brown Café. The meeting was attended by Mr. Fuentes and Nicelle Beauchene, a gallery owner who was living in Seward Park. They started talking apartment prices and soon Ms. Hubbs was living in East River herself. She characterized Co-op Village as fairly anonymous, which is also part of its draw. But there is a growing awareness that people are starting to catch on.

“It’s a strange thing to find out that you know half a dozen people moving into your co-op,” Mr. Canizares said. “I’ve lived in New York all my life and barely even knew any of my neighbors in any buildings.”

The only other area in Manhattan that is in the price range of Co-op Village is Inwood, which is not exactly the quickest trip to most of New York’s art institutions. The buildings are a five-minute walk from the row of galleries on Orchard Street—close enough to serve as an impromptu viewing room for a private collector. The former location of Reena Spaulings Fine Art was essentially part of the Seward Park building, next to where the Donut Plant is now. It’s the most affordable place to own unless you cross water. “It’s the last stop before you get to Brooklyn,” Mr. Godsill, the Phillips specialist, said. “In many ways.”

Seward also currently leases space to an actual, legitimate art gallery, Ramiken Crucible. (“It used to be Grand Spa, which is a tremendous misnomer,” Mr. Canizares said.) Recently, for a show by Bjarne Melgaard, the gallery brought something inside its doors that—one hopes—most tenants at Co-op Village keep out of their apartments: two live tigers. (Seward does not, however, prohibit pets, for whatever that’s worth.) The gallery’s owners declined to comment about their landlord, but the show went off without a hitch; no animals, or people, were harmed.

Despite the steady flow of changes to the neighborhood around it, Co-op Village remains curiously intact, even with its newer, younger residents. The Seward co-op board recently opted not to lease out a pair of storefronts to a Dunkin’ Donuts and 7-Eleven after protests from many tenants. And despite some complaints—which largely make up a minority opinion—the board has also kept the progressive era socialist murals by Hugo Gellert in the lobby of Seward, which depict Thomas Jefferson, Abraham Lincoln, Franklin D. Roosevelt and Albert Einstein. A lot of the older residents are dying off, but their children are taking over the apartments, which keeps the population fairly diverse.

“It’s a small town unto itself,” said Mr. Fuentes. “Once I cross Essex Street I feel like I’m leaving the rat race of the city behind a little bit. Even if the art world population shot up like crazy over the next couple of years, it’s almost impossible to really drastically gentrify or change what it looks like. All of these buildings, none of them have ground-floor retail outlets. There’s no possibility to have bars or restaurants.” He paused. “Who knows? I’ll probably be eating my words in a number of years.”

The buildings, like the art world itself, are insular, a city within a larger, more troubled one. Every once in a while, reality kicks in. In the early morning hours of July 5, two police officers were checking a disorderly conduct and narcotics allegation at the Seward Park Extension, a New York City Housing Authority building that is directly across the street from Seward Park co-op, though it is not a part of the complex. On the 23rd floor, one of the officers spotted a man with a silver revolver, shouted “Gun!” to his partner, who was patrolling a separate stairwell, and pursued the man, chasing him five floors before being shot in the chest from a distance of about eight feet. The bullet was blocked by a Kevlar vest. The next day, police had set up a barricade near the intersection of Essex and Grand. Signs offering a $10,000 cash reward for information in the shooting were posted on every street lamp and telephone pole. Dozens of uniformed and plain clothes officers were on high alert, frowning as they stood behind yellow caution tape. Reached by email, Mr. Canizares said it was the first time he could recall any violence in the neighborhood in the seven years he’s lived there. The injured officer has since been released from the hospital. The shooter, as of this writing, is still at large.