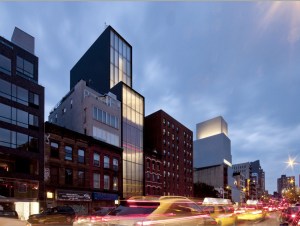 Norman Foster has earned a place on the shortlist for the Royal Institute of British Architects Lubetkin Prize for his Sperone Westwater tower on the Bowery, architecture website Dezeen reports. The Lubetkin celebrates RIBA members working outside Europe and the nomination comes on the heels of another Sperone Westwater accolade, the RIBA International Award, which Foster and Partners won for the building in June.

The building did not receive overwhelming approval when it opened in 2010. Ken Johnson at The New York Times wrote of it then, “More toolbox than jewel box, the building has an oddly cheap, low-tech and utilitarian appearance, like that of a discount-furniture emporium.”