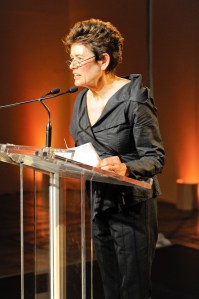 Fall galas are going to begin in only a few weeks, and news is streaming out about the lucky honorees that they will fête. The Museum of Modern Art’s film benefit has tapped Quentin Tarantino, and now the Storm King Art Center, in Mountainville, N.Y., has announced that it will honor master sculptor Ursula von Rydingsvard and philanthropist and board member Anne Sidamon-Eristoff at its Oct. 17 benefit at the Four Seasons Restaurant in New York.

Ms. von Rydingsvard, who’s known for remarkable sculptures of carved wood, has a long history with Storm King. Her first large solo exhibition was there, according to the center’s new release, and her works are included in its collection. (New Yorkers may recall that SculptureCenter presented a remarkable exhibition of her sculpture, from 1991 to 2009, last year.)