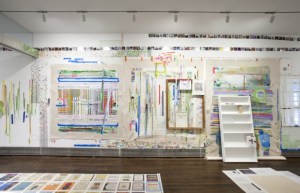 Galleries have been opening at a rapid clip on the Lower East Side over the past few years, but today brings news that one will close. After four years in business, the Sue Scott Gallery will cease operations at the end of August, according to an e-mail announcement. Its final shows will end July 27. A call for comment to the gallery was not immediately returned.

In the e-mail announcing the closure, Ms. Scott says that she will return to working as a writer and curator, a decision she has made after “much thought and deliberation.” She writes:

In the near term this includes writing The Reckoning: Women Artists of the New Millennium with Eleanor Heartney, Nancy Princenthal and Helaine Posner to be published by Prestel in 2013 along with the re-release of volume I [of] After the Revolution: Women Who Transformed Contemporary Art. I will also continue to work as an advisor and on special projects with our gallery artists.

Ms. Scott was among the first large wave of dealers to open on the Lower East Side when she settled there in 2008. Over the years, she has presented 24 exhibitions, including shows with Franklin Evans, Suzanne McClelland and Kristopher Benedict. She also organized shows with many established artists that are represented by other dealers, like Malcolm Morley (who shows with Sperone Westwater) and Pat Steir (who works with Cheim & Read).

Located on the second floor of 1 Rivingston Street, a short walk from the New Museum (and just a few feet from where Richard Prince once ran his Spiritual America gallery, at 5 Rivington, in the 1980s), the gallery has long defined the western edge of the Lower East Side gallery district. No longer.