Republicans are using a pair of Democratic heavyweights to fight the Obama campaigns repeated charge that Mitt Romney shipped American jobs overseas as Governor of Massachusetts and through his work with Bain Capital. This morning, the Romney campaign released an ad entitled “No Evidence” citing criticisms of the Obama campaign’s outsourcing attacks featuring footage of Hillary Clinton during the 2008 primary campaign saying, “Shame on you Barack Obama.” The RNC also released a research paper focused on Senator Chuck Schumer criticizing stimulus projects for driving money to “foreign companies.”

The clip of Ms. Clinton in Mitt Romney’s new ad came from a 2008 campaign stop in Ohio where she criticized President Barack Obama’s campaign for “perpetuating falsehoods” against her. It was paired with text from a Washington Post article branding an anti-Romney outsourcing ad as “misleading, unfair and untrue” and an article from FactCheck.org saying there was “no evidence to support the claim rhat Romney…while he was still running Bain Capital…shipped American jobs overseas” to make the claim President Obama has run a “dishonest campaign.”

“When a President doesn’t tell the truth, how can we trust him to lead?” the narrator asks in the ad.

The RNC’s research paper, entitled “Schumer V. Obama” includes quotes from Mr. Schumer describing his frustration that the Obama administration did not respond to his complaints that wind energy projects financed by the stimulus were going to foreign businesses.

“The goal of the stimulus is to strengthen the American economy, and that means creating jobs here in the U.S. not in
China,” Mr. Schumer said in one of the quotes highlighted by the RNC.

The Romney campaign previously used the clip of Ms. Clinton in another ad late last month. At the time, Obama campaign spokeswoman Lis Smith told Politico she stood by the charge Mitt Romney “was a ‘pioneer’ of outsourcing.”

“Mitt Romney might not like the facts of his private sector record: that he was a ‘pioneer’ of outsourcing and reaped massive profits while bankrupting companies and laying off workers, but that is exactly what he did as a corporate buyout specialist. And that’s not just Romney’s record, it’s what he’s proposing today,” Ms. Smith said. 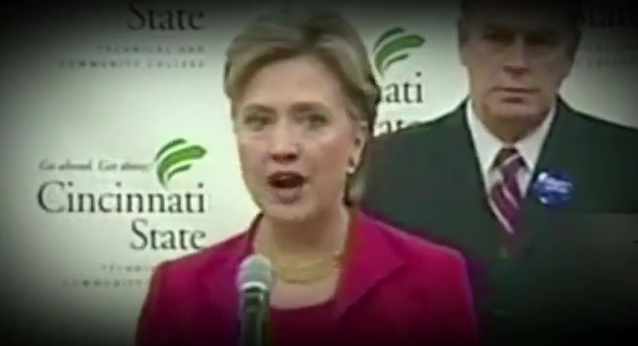