NBC has been receiving a ton of flack for their coverage of the 2012 Olympics. Some of it has been justified, some blown out of proportion, but either way it’s caught on as a hashtag: #NBCFAIL.

We’ve taken the five most public examples of the network’s gaffes and rated them on a scale of 1 (Whoops!) to 10 (Never again).

We understand the reasoning to not air a global event like this live, as terrorism isn’t exactly unknown at the Olympics. But NBC went overboard, blocking all live streams on the Internet, and only showing the opening hours later. (Look, we know you’ve got a monopoly on the games, NBC. No need to get all fascist about it.)

But the real problem with the opening ceremony broadcast, when it finally did air, was that the network slashed a portion of the program: a quiet, solemn dance honoring the victims of London’s 7/7 attacks. Again, NBC’s decision came from a cautious place, but by trying to erase any mention of terrorism from the broadcast, it became a much larger issue of censorship.

As an additional slap in the face, NBC explained that the memorial was cut not because it reminded viewers of the horrors of global attacks, but because the whole issue wouldn’t be of interest to American viewers. That’s just offensive on so many levels. This could have happened to anyone working on editing together b-roll on zero hours of sleep, especially since the boxing legend was part of a larger crowd of tourists that NBC corralled into talking about the Queen’s performance at the opening ceremonies. Plus, he was wearing a baseball hat, which might be a tip-off for a celeb sighting in L.A., but is also what every American tourist wears on vacation. Plus, he said the queen was “wonderful.” It’s really not that big of a deal, but thanks to Twitter and Deadspin blowing up the story, it ranks on the NBC Fail scale. Missy Franklin’s remarkable story is the reason we watch the Olympics in the first place: the 17-year-old Aurora, CO swimmer came in first last night on the 100-meter backstroke and the 200-meter backstroke final. She also competed in the 100-meter freestyle only 13 minutes after she jumped out of the pool of her first event, and landed second place. She is our new Michael Phelps. (Who also had a race spoiled by a promo.)

Unfortunately, the other reason we watch the Olympics is for the excitement and anticipation as we wait for the scores during commercial breaks. It’s what keeps us glued to our television. So when NBC aired a promo spot for Today of Ms. Franklin being interviewed about her gold medal wins before she actually swam the race, it wasn’t only the viewers that were pissed: companies pay an arm and a leg to put up commercials during the Olympics, and they might think twice about paying premium if viewers no longer felt the pressing need to keep the channel on NBC even during the ads.

Just another reason to keep the broadcasts live, people.

4. The ceaseless, insipid commentary during the games and interviews

Andrea Mitchell’s Kremer interview of Michael Phelps last night was a prime example: she kept asking “Which Michael Phelps” we’d be seeing tonight…the champion or the choker? When Mr. Phelps tried to politely evade the question, she kept pressing him for an answer. Dude doesn’t have a crystal ball or insider information into the future!

It’s almost worth it to watch the game on mute, as the incessant chatter from what sounds like a room full of non-experts during every single meet can be grating. Then again, it can sometimes be hilarious…like when an announcer nicknamed  Chinese gymnast Guo Weiyang either “StruggleMuffles” or “struggle muscles,” depending on what you heard when the replacement took the pommel horse.
Really? We need to know that being stalled before the game “adds to his inner tension”? Give it a rest, guy.

This will come down to how you feel about privacy issues: NBC convinced Twitter to ban The Independent‘s Guy Adams from the site after he made disparaging remarks about the way they were showing the games. He also tweeted out the personal email of NBC’s Olympics President Gary Zenkel, which does actually violate Twitter’s privacy policy. The ban has since been lifted, and you’ll have to make up your own mind on whether or not tweeting emails/phone numbers are cause for an account suspension. 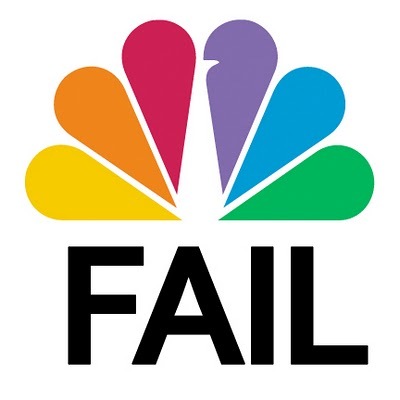