At a fundraiser for Joe Kennedy III two weeks ago in Pal’s Cabin, someone introduced Steve Fulop as the next mayor of Jersey City, a tag he’s willingly worn for the past number of years.

But now there is less than a year to go before Election Day and a much ballyhooed showdown with incumbent Mayor Jerry Healy, who says he’s running for a third term.

A councilman since 2005, Fulop, 35, points to successes in school board elections and his alliance with Donald Payne, who in June won the 10th Congressional District Democratic Primary, as evidence of his political reach beyond the perameters of his own ward.

“Our best asset is our huge volunteer base, 70 percent of which is composed of people from outside Ward E,” Fulop told PolitickerNJ.com. “What we’re doing is we have been working, trying to find that balance of professionalism and big city races, somebody who can come in and overlay with messaging. With the exception of the governor’s race, this will be the biggest race of the next year. Some of these professionals want to get engaged now. Our structure is unique. We’re fundraising daily.”

On leave from his Wall Street job and in training for a triathlon to raise money for veterans, Fulop just hired Global Strategies of New York to do his polling, and Mark Putnam from Putnam Partners to do his campaign commercials. Longtime ally Tommy Bertolli is his field operations guy.

But the question remains in these troubled times: Why does Fulop want to run for mayor?

“Jersey City is unlike any other urban area,” he said. “We have so much in natural resources, and yet our leadership has held it back and we are underachieving. We have an opportunity to be a destination city. From the education front to the safety front to the tax front, over the last five months of the campaign I will issue policy papers. This is not just about name recognition and name ID. It will be about ideas and policy, in the sense that here’s what we’re going to change, substantive concrete initiatives and ideas. We’re going to start to put it out there in the communities at the end of this year. Obviously the timing is sensitive because once it’s out there you begin playing defense.

“The city has a tremendous amount of potential, and the same cast of characters for the last 20 years. I recognize that we will have two opponents in this election: Jerry Healy, and the more scary opponent, which is apathy. The way to motivate people is through ideas. If it’s just Steve versus Jerry the same people will vote, we’ll have a low turnout election and Jerry will win. Jerry’s game plan is apathy. Mine is ideas.”

Fulop’s detractors continue to dismiss him as a downtown councilman, a Ward E product who will never be able to translate to the entire city.

“When we started seven years ago they said it was only the high rises that would support me,” Fulop said. “We won re-election with historic numbers, and then it was only Ward E. Okay, it‘s just one ward. Then we won the school board races and it was just the unions. But when we won the committee seats, I think that changed the perception to the point where, ‘okay, we’re penetrating, we won seats in Ward F. We won seats in the Heights.’ Look, the same group of people always will be detractors. I don’t expect the naysayers to go away, but as long as they continue to complain from the couch, I don’t see them as a problem.”

Fulop said his decision to run against the affable, Sinatra-swinging Healy isn’t personal.

“I have no problem with the guy,” said the councilman. “We’re cordial when we see each other. The main problem is the people around him. The problem is taxes have nearly doubled under his watch. If you look at the city, it’s a tale of two cities, with areas of economic activity versus areas of depression never more pronounced. …This administration has had more arrests than any in the history of Jersey City. Nearly every deputy mayor was arrested, the city council president and many inspectors and city employees. That culture has permeated every aspect of the administration. When you look at administrations prior, where there have been perhaps more engaged mayors, you’ve seen less of that activity. Jersey City was the focal point during the Solomon Dwek case. Half of the arrests came from Jersey City.”

Fulop’s journey into Hudson politics started in 2004 following his return from Marine Corps service in Iraq.

The late Mayor Glenn Cunningham gave him a proclamation at City Hall.

“Glenn Cunningham was also a Marine, remember, and we spent some time in City Hall after he gave me the proclamation and he asked me then if I would run against (Bob) Menendez for Congress,” the councilman recalled. “I wasn’t even registered to vote at the time. The mayor wanted to run a ticket against Bob Menendez. I was going to Columbia and NYU, pursuing two masters degrees and there was Glenn Cunningham telling me, ‘We want you to run against Bob Menendez.’ I called friends and family to ask for their advice. My parents are immigrants who run a deli in Newark. They were focused on putting food on the table, and never politically inclined. We never discussed politics at the dinner table. I had never been in city hall. But I called him Monday and said, ‘Okay, I’ll do it.’ Glenn Cunningham was a special guy who had the ability to connect with people. It’s fair to say that had I not gotten that phone call from him I wouldn’t be sitting here today.”

PolitickerNJ.com asked Fulop about his decision to join the military in the aftermath of the Sept. 11, 2001 atrocities.

“I thought to myself growing up that military service was not the only way to serve, but decided it was a good thing, and instilled certain character traits,” he said. “Around the time I graduated from college it was virtual peace time, but I always said to myself that I would consider enlisting if something happened. I was in downtown New York on 9/11. My building actually shook, and so I did some soul searching and I knew the financial services industry was not the be all and end all, and I deployed with the first troops out to Iraq. I was in Iraq for a little over six months. I was like an old man. I was 26 years old with 18-year-olds on the enlisted side. My job was combat engineer. Our primary focus was battalion purification all the way up to Baghdad. We were there in Baghdad for two out of the six months. In Kuwait the rest of the time, then back to San Diego, Camp Pendleton.

“Because I served I have a different amount of appreciation for the sacrifices that families make. I was there and I wasn’t married with kids. A lot of people in my battalion company were.”

After losing to Menendez, Fulop said he has built up his positive relationship with the now-sitting U.S. senator and calls his relations with Menendez “very good.”

“I’m a big supporter of his,” said the councilman. “In this election in November I intend to be out there aggressively supporting him. I’m on his fundraising team, and I will continue to do that. We’re approaching $30,000 raised for him, and I’d like to raise a total $50,000 by the election.”

Does he have any gubernatorial picks?

“Not really,” he said. “I haven’t really gotten involved in that at all. I’ve met  Barbara Buono, I did a fundraiser for John Wisniewski years ago, and I have a good relationship with the governor’s office.”

Fulop addressed the last of those relationships, his good ties to the Republican governor, and a recent meeting with Department of Education Commissioner Chris Cerf, which prompt local criticism.

“We don’t agree on everything,” he said, referring to Christie. “I’m not a supporter of vouchers. I think charter schools have their place but they’re not a panacea. We’re trying to fix the traditional model of public schools. I have been involved in the education debate in Jersey City because if you’re going to fix Jersey City, you have to fix the education system. Now, we’ve hired a terrific superintendent after a national search, and we got past just hiring your neighbor. The governor’s office was helpful in signing a pay waiver for the other superintendent to leave. They use it as a means to hurt me, but it’s those same people who for 23 years have tolerated failing schools. For the first time we’re getting engaged to fix this, and instead of being mad at me, they should be mad at people for accepting mediocrity. I don’t agree with Chris Christie on every part of the education front, but what I do agree with is that he makes education a priority.”

A hedge funds expert at Goldman Sachs, Fulop’s ties to Wall Street in a working class city make it hard not to compare him to another area leader: Newark Mayor Cory Booker.

But Fulop and Booker aren’t close.

“As you know, Cory Booker and Jerry Healy are allies,” said Fulop. “I’ve never had a conversation with Cory Booker of any substance. What have I learned from my vantage point, is the one thing you hear about Cory is he’s not here all the time. I’m a very hands-on guy. I’m very engaged. I think the lesson learned from (Newark) is even when well intentioned, one can be perceived in a negative light. One thing about me though is you will find me at City Hall. Being the mayor of a big city I think being a cheerleader for the city is part of it, but not the only part of it. Having said that, my family is in Newark daily, and they have been for the last 40 some odd years. There are a lot of positive things that have happened during the Booker administration.”

What about President Barack Obama?

“I’m a Democrat and I think Barack Obama has made some hard political choices for which he doesn’t get a lot of credit,” said Fulop. “I think he’s earned the opportunity of another four years.”

PolitickerNJ.com asked Fulop what he regards as our toughest political challenge in these times.

“I think access to information is a great thing but it has created more of a polarizing society in the sense that misinformation spreads quickly,” he said.

“It is hard,” Fulop said of trying to maintain good working ties to both men. “The culture of bear knuckle permeates everything, but I’m going to continue to do my best to stay out of county business. I’m not interested in delving into county politics. We have taken the approach that we’re just focusing on Jersey City.

“I hope it resonates,” he added. 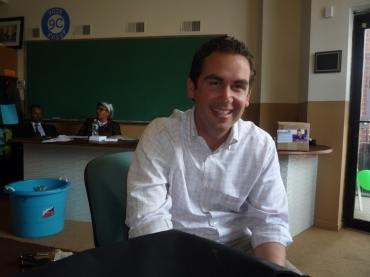