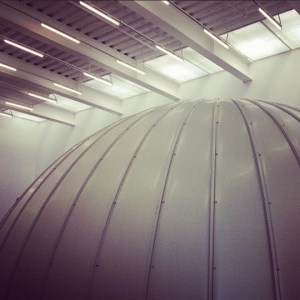 On July 18th, the New Museum will open its latest show “Ghosts in the Machine,” a group show that includes 70 contributors whose work spans 50 years and examines “the ways in which humans have projected anthropomorphic behaviors onto machines and how those machines have become progressively more human,” according to the press release announcing the show. It will include a huge dome on the building’s fourth floor, a silo roof 12 feet tall and 24 feet in diameter that aims to recreate Stan VanDerBeek’s Movie-Drome (1963–66).

“The Movie-Drome is something that’s this legendary project within the experimental film community but it was something that very few people actually saw during its existence,” said Gary Carrion-Murayari, who curated the show with Associate Director and Director of Exhibitions Massimiliano Gioni, in a phone interview.

The originial Movie-Drome was built just next to VanDerBeek’s home in upstate New York and was only open to the public for a handful of viewings, during which participants would lie on the floor as a series of images danced across the dome’s interior. VanDerBeek, who died in 1984, was actually one of the pionners of CGI films, which he made in association with Bell Labs in the 70s and the dome will feature a program of film and still images taken from the Movie-Drome, and his other screening events.

“There’s a very handmade personal quality to it,” Mr. Carrion-Murayari said. “It’s not a puzzle where everything fits together perfectly. Images overlap, slides have this dialogue with, or are sometimes on top of, other film projections, that’s just the way that he worked. You can see an artist who’s working with collage moving on to new technology and what that means, to apply old principles to something that’s more advanced and precise.”

The dome was supposed to be a global experiment, since anyone could theoretically install such a structure (the New Museum went to the same farm supplies company in Pennsylvania used by VanDerBeek to obtain his dome). Alas, this did not happen, but the New Museum has given global visitors another shot at experiencing the chaos within.

“He would have loved to have seen both the positive and the negative impact of the Internet,” Mr. Carrion-Murayari said of VanDerBeek. “It’s something he probably would have been working with today.”