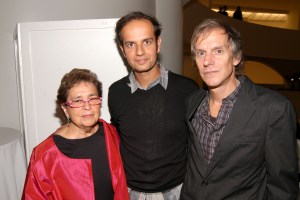 In this week’s edition of The New Yorker, Lauren Collins writes about artist Tino Sehgal, whose major new work These Associations just premiered in Tate Modern’s Turbine Hall with a team of 70 interpreters—included a former Observer editor—charged with telling various personal stories. At this point Mr. Sehgal’s various quirks are pretty well known—he refuses to travel by plane, tries to prevent people from photographing his work and sells his pieces verbally—but Ms. Collins assembles a superb and complete portrait of his career.

A few great tidbits: he told his parents he didn’t want to celebrate Christmas when he was 11 (“This whole kind of Christian colonizing of what was a collective, pagan ritual—I’ve mellowed out a bit, but I was enraged, somehow, by that,” he said), used to be a skateboarder and is not a big fan of standing in lines. Does he let his sons celebrate the birth of Jesus? Read the piece to find out.

While most curators in the piece praise Mr. Sehgal’s work, Ms. Collins does dig up a nice line from an article by Harvard art historian and critic Benjamin H.D. Buchloh which provides a healthy counterbalance: “Sehgal is the kind of artist who—had he encountered Duchamp’s urinal in 1917—would have proposed to exhibit a kitchen sink the next year, fully convinced that he had become a radical artist overnight.”

The artist also has a piece at Documenta 13 that sounds pretty great. It involves Timbaland. Read the article here.