Rev. Jackson is the 132nd elected bishop of the African Methodist Episcopal Church, the oldest black religious denomination in America. The Consecration Service is scheduled to be held on Wednesday, July 4, 2012 at 9 a.m. at Gaylord Opryland Resort & Convention Center.

A Democratic Party leader who supports the vouchers and education reforms championed by Gov. Chris Christie, the Rev. Jackson is a graduate of Delaware State University with a Bachelors Degree in History and the Interdenominational Theological Center, Atlanta, Ga., with a Masters of Divinity. In 1981 he was assigned as the pastor of St. Matthew AME Church, Orange. Under his ministry more than 3,000 people have accepted Christ or joined the church. The church has more than thirty ministries that minister to the spiritual, emotional, educational, physical and financial needs of the church and community.

In addition to his pastoral responsibilities Rev. Jackson serves as the executive director of the Black Ministers’ Council of New Jersey which represents more than 600 African American churches in New Jersey. As executive director of the BMC he has been outspoken on almost every major issue in the state, pressuring the state to increase funding for poor (Abbott) school districts, leading to the State Supreme Court to order New Jersey to spend more than $8 billion to achieve parity in spending, adequate funding for charity care for those who are uninsured, legislation to end predatory lending targeting minorities and seniors and development of the urban areas of the state. He is best known however for his leadership in the fight against racial profiling and reform of the New Jersey State Police which resulted in New Jersey passing legislation and signed by the governor making racial profiling a crime.

He is the recipient of hundreds of awards including being named the Man of the Year in 2000 by New Jersey Monthly Magazine, the recipient of the William Ashby Award by the United Way, the Martin Luther King Award by the Newark North Ward Center. Rev. Jackson has been named repeatedly among the 25 most influential people in New Jersey.

Pastor Jackson is the husband of Christy Davis-Jackson, Esquire and the father of two children, Regina Victoria Jackson, a graduate of Florida A&M University, and son Seth Joshua Jackson. 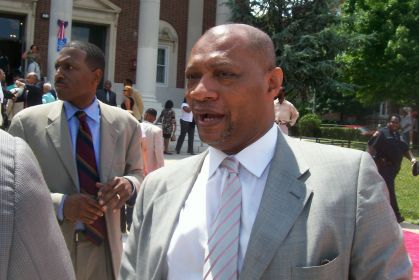