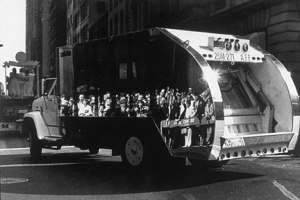 Found art is all the rage these days. It’s even made its way into the Sanitation Department, according to The New York Times. Nelson Molina, a sanitation worker, has plucked some 1,000 objects, paintings and posters from the streets of New York and put them on meticulous display in the garage. Is this an act of institutional critique?

[Nelson] Molina, 58, a lifelong New Yorker and a sanitation worker since 1981, began collecting pictures and trinkets along his route about 20 years ago, he said, to brighten up his corner of the garage locker room. Gradually, his colleagues on East 99th Street began to contribute, gathering up discarded gems they thought he might enjoy. As the collection grew, word spread, and workers from other boroughs started to drop off contributions from time to time. Next, building superintendents along Mr. Molina’s route started putting things aside they thought he could use.

Whether or not Mr. Molina is making a conscious critique, he’s not the first artfully inclined person to be connected with the Sanitation Department. Mierle Laderman Ukeles has been the Sanitation Department’s artist in residence, conceptually speaking, since as early as 1977. In 1968, Ms. Ukeles wrote the “Manifesto for Maintenance Art,” one of the first lines of which is: “The sourball of every revolution: after the revolution, who’s going to pick up the garbage on Monday morning?” She touched on her approach to sanitation work in a 2009 interview with Art in America:

You know, I saw On Kawara’s show recently [at David Zwirner Gallery], and I think that he is dealing with maintenance more than most. That is what maintenance is, trying to listen to the hum of living. A feeling of being alive, breath to breath. The same way that the sanitation department sends out 1,600 trucks every day, it is like this repetitive thing that as much as you chafe at the boredom of the repetition is as important as the other parts. And I know that that has to be a part of culture. Because if it isn’t, then you don’t have a culture that welcomes in everybody. And, I mean everybody.