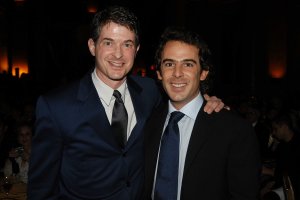 Cameron, of the Orange County Museum of Art, which will host a 2013 California-Pacific Triennial and Mexico City-based collector Eugenio Lopez, who does not have a triennial. Yet. (Courtesy Patrick McMullan Company)

In the Los Angeles Times today, reporter Jori Finkel has a nice piece on the status of that ever-popular exhibition format, the biennial. Changes are afoot. For one thing, schedules are shifting, says former New Museum curator Dan Cameron, who’s now at the Orange County Museum of Art, which rechristened its California Biennial as the California-Pacific Triennial. From the piece:

“Without intending to we are following something of a trend: the transformation of biennials into triennials… “It makes sense because it gives you more time for production, research and to raise the funds instead of cranking out a show every two years.”

Because of delays related to funding, the Prospect exhibition that Mr. Cameron started as a biennial in New Orleans, following Hurricane Katrina, is now a triennial. And as he pointed out to Ms. Finkel, the New Museum opted for a triennial when it decided to start a signature, recurring exhibition (not a biennial).

As many curators in the piece note, it takes a great deal of time and money to put together one of these exhibitions, which makes a three-year space between them pretty sensible, allowing everyone a little bit of breathing room. Here’s hoping Documenta-style quinquennials come into vogue soon.