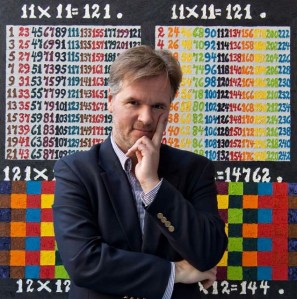 In filling its chief conservator position, the Wadsworth Atheneum, in Hartford, Conn., has tapped one of its own, Ulrich Birkmaier, who joined the museum in 2000 as paintings conservator and has served as acting chief conservator since October of 2011. ArtDaily has the news today.

Mr. Birkmaier has also worked at the J. Paul Getty Museum in Los Angeles, Calif., the National Gallery of Art, in Washington, D.C., and the Fine Arts Museum, in San Francisco. In addition, he served as a guest scholar at the Getty Conservation Institute, “where he conducted research on painting supports utilized by Marsden Hartley,” according to the museum. Which sounds kind of amazing.

For his press photo, Mr. Birkmaier posed in front of part of an amazing Alfred Jensen painting from the museum’s collection. Well done, sir.