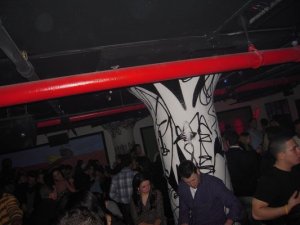 Work in Progress (W.i.P.), a basement club in Soho that has a rotating art collection and opened with aspirations of becoming something akin to Andy Warhol’s Factory, was shut down by the police earlier this summer after a fight between pop stars Chris Brown and Drake. There were bottles thrown and Rihanna’s name was tossed around as the cause of the altercation. The club reopened on July 11 and is holding a summer art show that opens Wednesday night.

A publicist told us the club is “continuing to exceed the recommended security protocol for a club of our size,” but beyond that declined to comment. Here’s the official statement from W.i.P.:

We are thankful to the court for permitting us to reopen and allowing our over 250 employees to get back to work immediately. When we reopen our doors tomorrow, we will be focused on providing a safe and fun atmosphere for our customers. To that end we are enhancing our security and will continue our practice of exceeding the recommended security protocols for a club of our size.

For what it’s worth, the staff of The New York Observer is quite familiar with the club’s security protocol. We had our holiday party there in December. It began around 5 p.m. (we like to start early around here) and a very serious-looking security guard denied us entry initially because none of us were on the list. You see, we all failed to RSVP. (But really, who RSVPs to their own holiday party?) We all got in eventually and found a vast empty club awaiting us because it was, after all, the late afternoon. “Exceed” indeed!

The Arty Party runs every Wednesday through September. It has been organized by the Con Artist collective “in the spirit of…the Exploding Plastic Inevitable,” Warhol’s multimedia event that introduced (a small portion of) the world to the Velvet Underground.