It’s the ages-old question: Do people who abuse protected speech—for really no good reason—really deserve it? And is anyone on fair ground to even ask that kind of thing?

Well: DNAinfo reported on the tale of one Robert Bell, a 26 year-old who works as a “financial services recruiter” and whose preferred watering hole is the notoriously-named West Village pub, The Slaughtered Lamb, likely named for the fate of the sobriety for all those who dare enter. Like, for example, Robert Bell, who—while the report didn’t indicate any particular level of intoxication—managed to get arrested for something incredibly commonplace: Giving someone the middle finger.

Except, he gave cops the middle finger. Three walked by him, and he flipped it. A fourth came up behind him, cuffed him, and searched him. They then jailed him for two hours and released him with a charge of disorderly conduct. The cops didn’t appear at his court date (for which he was repped by the ACLU), his case was dismissed, and then, he decided to sue for an “undisclosed amount.” He argues they violated his free speech and that they inflicted emotional distress. They will probably argue something about him being an asshole. You can decide which one of these things is more true. But he did give a wonderful quote explaining the origin of this entire fracas, which is apparently in the suit itself:

Again, cops probably “don’t like” him, and while that doesn’t give them the right to arrest him, it doesn’t mean giving them the finger is the right thing to do (though most would probably see that as constitutionally protected, but we live in Bloomberg’s New York, so who knows).

Bell would be wise to remember that New York City cops may, in a very extreme and theoretical situations, be the last line of defense between him and a bunch of not-so-peaceful protestors who happen to dislike recruiters for the financial services industry quite a bit.

So, it’ll be fun to see how this plays out, this young fellow taking on The Man. All that said, to paraphrase a fellow Observer Wall Street writer’s reaction to hearing this story: There is absolutely nothing—nothing—like the belligerent indignation of those who work in the finance sector. 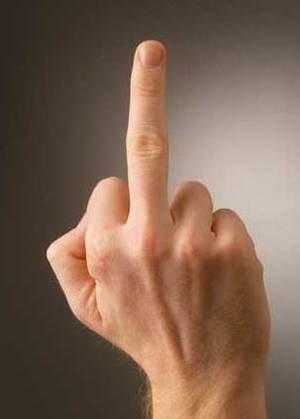