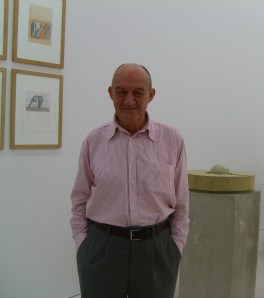 Walter Pichler, a visionary architect, sculptor and designer who developed his rural estate, in Burgenland, Austria, into a home for many of his creations, has died at the age of 76. Gladstone Gallery, which represents the artist in New York, confirmed the news, stating that he died yesterday evening at his home.

The artist’s works often bridged the divide between art and architecture, art and design or even art and electronic accessories, as in his headgear works, which included 1967’s missile-shaped V-Helmet (Portable Living Room). His drawings for architectural works were similarly fanciful, often including elaborate underground structures.

Mr. Pichler was born in 1936 in Deutschnofen, Italy, and worked for most of the past four decades at his home in Austria. He showed outside of Austria only rarely. On the occasion of his 2001 show at Gladstone, New York Times critic Ken Johnson remarked that the artist had not had a solo show in New York since 1975, when he was included in the Museum of Modern Art’s Project contemporary art series.

In 1967, Mr. Pichler was included in a show at MoMA called “Visionary Architecture,” along with Hans Hollein and Raimund Abraham, who designed New York’s Austrian Cultural Forum. At the time, Times architecture critic Ada Louis Huxtable noted Mr. Pichler’s “lovely drawings,” writing that they were “somewhat reminiscent in character of the 18th century renderings of another fantasist, Claude Ledoux.”

The gallery’s list of venues for the solo shows he had during his career is formidable, including the Stedelijk Museum in Amsterdam, the Generali Foundation in Vienna, the Israel Museum in Jerusalem and the Whitechapel Art Gallery. He represented Austria at the Venice Biennale in 1982 and appeared in the fourth Documenta, in 1968.