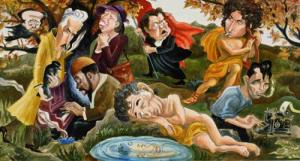 The mural at the Waverly Inn, which was damaged in a fire at the end of June, has been restored, DNA Info reports.

The Edward Sorel painting depicts characters from the history of Greenwich Village like Allen Ginsberg, Theodore Dreiser, James Baldwin, Edward Albee and others. It has been a staple at the restaurant since it opened. The restaurant reopened last week, a week after the fire, which officials say was caused by faulty electric wiring.