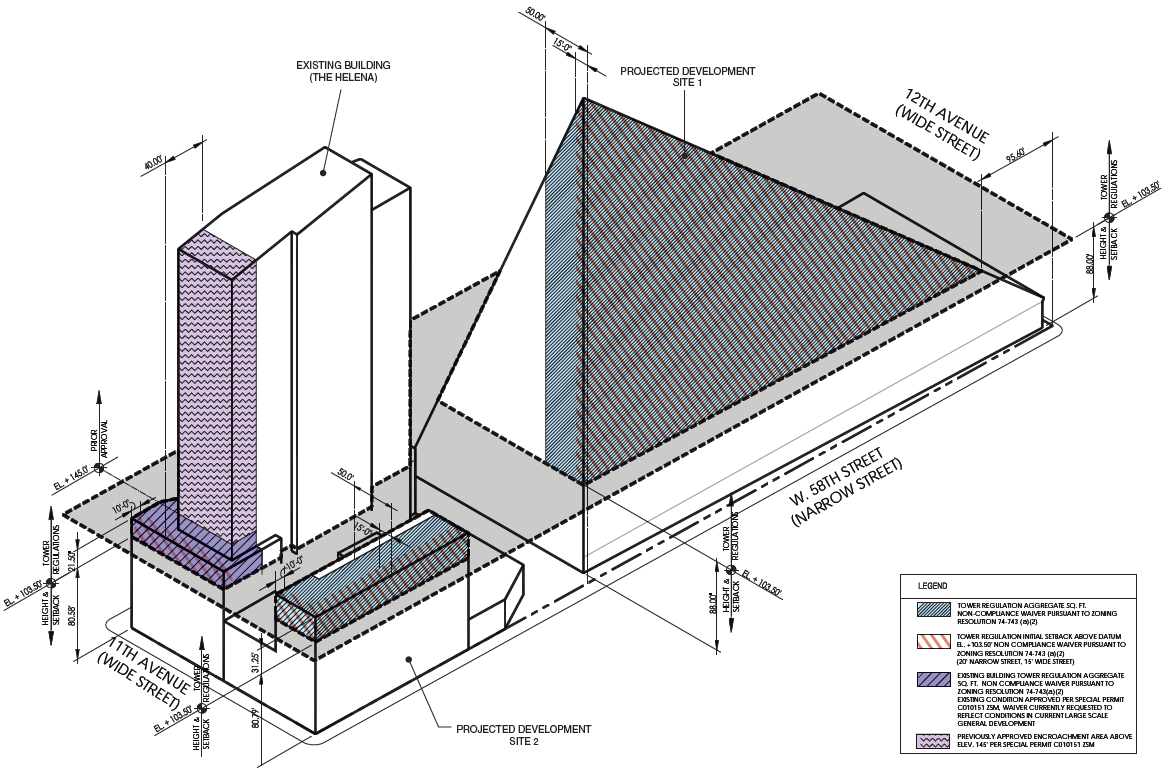 The building, known as Development Site 2, can be seen on this page from the land-use application. 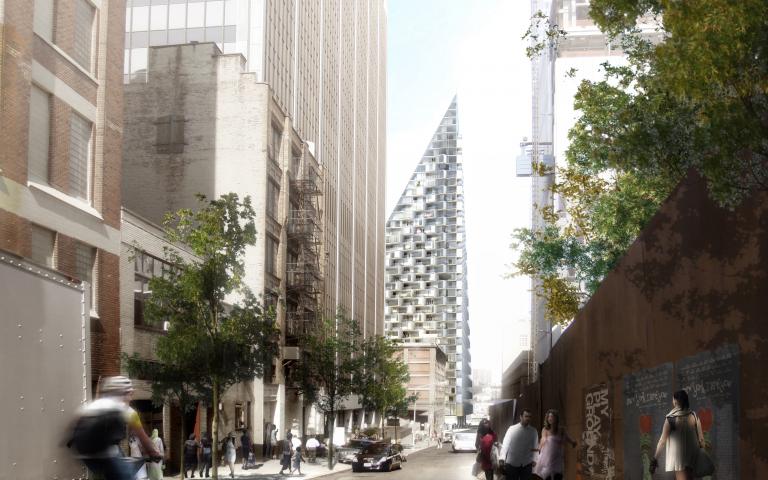 It is also barely visible in this rendering. For the moment, Durst Fetner has no plans for the building but must rezone it anyway because it is part of the same zoning lot. 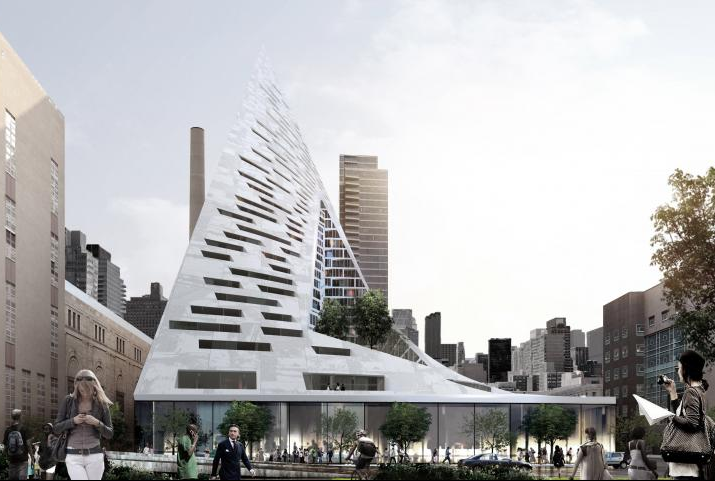 The unusual building, seen from the Hudson River. 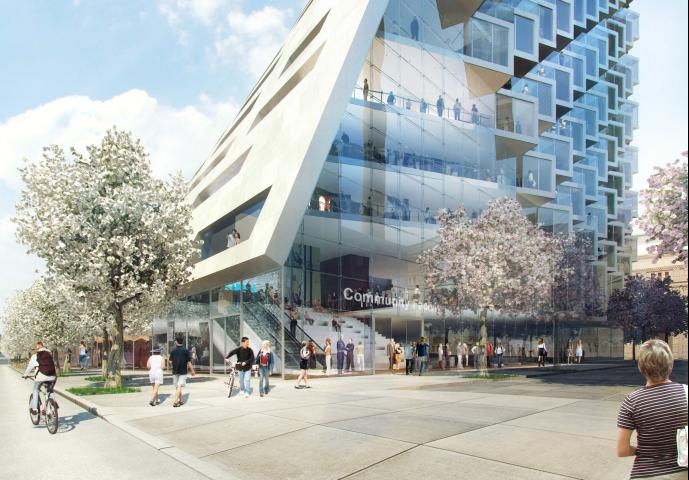 The backside if far from ordinary, as well. 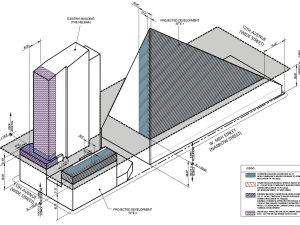 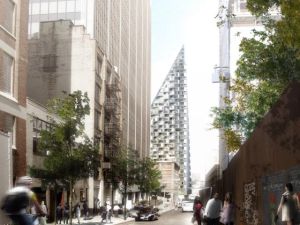 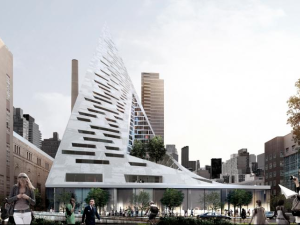 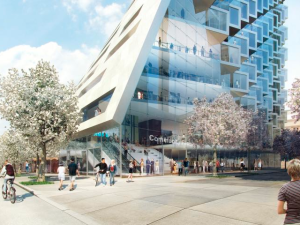 One of the big surprises to come along since the boom has been Durst Fetner’s new apartment building planned for the end of West 57th Street. The pyramidal structure designed by the Danish wunderkind Bjarke Ingels Group, aka BIG, is the kind of ambitious creation that was supposed to have died during the decadent days of the last decade. (We may actually start to see more of the exquisite as the super-high-end continues to out-perform every other housing sector in the city.)

Within the BIG surprise was hidden a smaller one, revealed in planning documents filed when the project was approved two weeks ago, dubbed Development Site 2. Plans call for a 110-unit apartment building that backs onto the pyramid apartments, though it is unlikely it will be built in that form, if at all. Instead, it is a zoning technicality.

“That building is in the same zoning lot, so it has to get rezoned with everything else,” Jordan Barowitz, a Durst spokesman, explained. “For technical reasons, we have to keep it in there, so we decided to make it a residential building, to study the impacts.”

Currently, the building, at the corner of 11th Avenue and 58th Street, is a self-storage facility—a Manhattan Mini Storage, to be exact—with a few years left on its lease. It is one of those former industrial buildings that has been totally bricked up. When the lease comes due, the Durst Organization may extend it or look for an alternative commercial use, but the firm is unlikely to redevelop the plot for housing, according to Mr, Barowitz, at least in the form currently outlined in the rezoning.

This is in part because the proposed nine-story building, which would be built around the existing six-story structure, would block views from the new building as well as one Durst Fetner built five years ago, the Helena, which is in the southeastern corner of the lot, on 57th Street.

“We don’t know what we’re doing with that building yet,” Mr. Barowitz said.

Instead, the firm is proposing the 110-unit structure simply because the city’s environmental review requires some accounting of what could go on the site, because both are on the same zoning lot. For technical reasons, Durst Fetner chose an apartment building even though they may or may not actually build one.

As for the rest of the block, the ULURP application reveals an unusually shaped building—called not a pyramid but a hexahedron. It measures 1.1 million square feet, with with 867 apartments, 151 of which are set aside for affordable for families making roughly $40,000 a year. Of the building’s remaining area, 80,000 square feet will be set aside for commercial uses, likely doctor’s offices and other community-focused space, while there will be 62,000 feet of ground floor retail.

A community facilities building of 28,000 square feet is proposed behind the storage facility and next to the Helena, and between those and the BIG building will run a driveway serving the two residential buildings. The project will have 285 parking spaces, more necessary than in some buildings, no doubt, given the nearest subway station is Columbus Circle, four avenues away.

More will be revealed tonight at the land-use hearing of Community Board 4, the fist public meeting for the project as it heads into the grueling seven-month public review process. Previously, the board had expressed mild support for the project, celebrating its design, but there may be some issues surrounding the affordable housing component.

In a statement, Douglas Durst mentioned the potential for the project to play a role in the continued transformation of the west side. “We are pleased that we have reached this important benchmark,” he said, “and we look forward to working with the CB 4, City Planning and the City Council on this exciting project.”