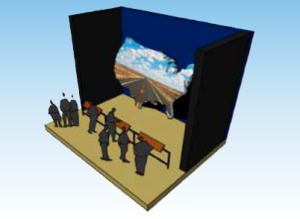 What will a museum about writers display? It’s a tricky problem since the written word doesn’t easily lend itself to visual presentation of this kind. But the American Writers Museum Foundation has just released a plan that gives us a hint. After numerous “charettes,” or brainstorming sessions, in which scholars, writers, publishers, designers and museum professionals gathered to toil over the design problems, the American Writers Museum has come up with a plan for a museum that answers the call of the many Americans who are “aghast”—as per Amaze Design, the company which developed the plan—that we have no facility for honoring U.S. writers. According to the plan, the museum will be some kind of cross between the Tolstoy House Museum in Moscow and the Rock and Roll Hall of Fame.

One of the biggest challenges for the American Writers Museum, which will be situated in Chicago, according to its concept plan, is “establishing an exhibit platform that is flexible enough to accommodate the breadth of American writers and writing.”

The charettes, which included some 45 participants, including New York Times multimedia editor Andrew Devigal, Noreen Tomassi, executive director of New York’s Center for Fiction, international museum consultant Ronnie Hartfield and Dr. Robert Stepto, an English professor at Yale University, set out to solve this challenge by providing a range of exhibition spaces, lounges and an education center the centerpiece of which will be the Writers’ Hall. This hall will present a series of “vignettes,” essentially stage sets, that will house a variety of exhibitions themed around a particular topic or era.

Sample vignettes include “American Families,” for example, which would provide a set devised after an “all-American” mid-century kitchen in which visitors will take a seat and play out the roles of their favorite characters amidst a display of lighting effects, audio cues and interactive surfaces. The exhibition will be informed by authors and texts like Louisa May Alcott’s Little Women, Sinclair Lewis’s Babbit and James Baldwin’s Go Tell it On the Mountain. “Working” will be set in a Depression era movie theater with short interactive cinematic experiences based on texts like Arthur Miller’s Death of a Salesman, John Steinbeck’s The Grapes of Wrath and Grace Paley’s Collected Stories. The schema for “Conflict” will provide the most conceptually bizarre vignette replete with a boxing ring and a video embedded in the floor that will illustrate “conflict narratives” such as those found in Norman Mailer’s The Naked and the Dead, Muriel Rukeyser’s The Book of the Dead and Martin Luther King’s Letter from a Birmingham Jail.

Take a spin through the full concept plan here and see for yourself the solution to the museum we’ve all been clamoring for.