Williamsburg has always—somehow—remained an elusive, fleeting place (let alone: idea) for the thinktank at the Styles section of the New York Times. It’s so close, yet, so far. But its further colonization by moneyed Manhattanites (as opposed to its earlier colonization by not-so-moneyed Manhattanites) along with the advent of HBO’s ‘Girls’ (and thus: the ability to make a highbrow-pedestrian pop culture reference that they can always return to), Styles section writing about Williamsburg has become significantly less elusive and…labored.

Today, the Styles’ inner-Magellan emerges as they trek one subway stop out of Manhattan, and attempt to guide the people whom Williamsburg residents once tried to escape into their neighborhood.

Appended to an abhorrent piece about the joys of Wythe Avenue’s not-really-all-that-new development, the Paper of Record notes:

A few basics for the first-time visitor to the sybaritic playground of Williamsburg.

Sybaritic, huh? And you haven’t even been to Turkey’s Nest! Again, if you can see Williamsburg from the East Side of Manhattan, does that mean that it is near? Ask yourself: Did Lewis and Clark want to take the straightest path they could?

GETTING THERE A cab from Manhattan is about $20 to $25, depending on your departure spot.

Why wouldn’t the first way to get there be a cab?

The closest subway stations to the Wythe Avenue hub

Imagine the joy of the G-Train—oddly placed in this sentence before the L-Train, which is clearly closer to Wythe Avenue, “hub” not withstanding—the insipid few who would actually take this article at face value will experience. And there is more. There is always more.

But then, in the actual article about nu-Williamsburg, there is this:

Upstairs, a D.J. who resembled Jesus Christ [1] played dub reggae [2], and when the sun crept below the jaw-dropping Manhattan skyline, it seemed to activate everyone’s internal Instagram clock [3]. A sea of iPhones shot up to capture the blazing pink hues (#nofilter)[4], as if the singer Grimes had just made a surprise appearance [5] at a Skrillex concert [6].

1. Which Jesus Christ? Race? Ethnicity? Age? Also: “Long-haired with a beard” didn’t quite work as well as invoking the Judeo-Christian god? Manifest Destiny, much?

2. “Dub-reggae” is redundant, though we could understand the need to clarify for Styles readers who don’t know how to get to Williamsburg in the first place, even though this clarification isn’t likely to make any more sense to them than the alternative (“Dub”, though maybe they know what “Reggae” is now that Miss Lily exists).

3. Because everyone has an internal Instagram clock. Or at least these Williamsburg folk do!

4. This, most significantly, might be the first time a hashtag may have been used in the pages of the New York Times unironically. Or used anywhere Unironically. In better days, Al Siegal would shank someone over this.

5. Imagine this: Everyone gets out their iPhone in one single, synchronized instant and clamors for that perfect viewpoint to take a photo of the sunset, all at once, as chaos erupts around them. Something is setting, here, and it is not the sun. [In the event you were wondering, it is an era of intellectual capability.]

6. Grimes, Skrillex, and Diplo once went on tour together. Other than that, one would argue that these artists wouldn’t be likely to appear at each other’s show, let alone their cross-section of fans even exist. Skrillex fans would likely have no idea who Grimes is, and Grimes fans might boo Skrillex. But at least someone tried their hand at Google cross-references.

There is also this:

On the other side of the pool, a scrawny photographer named Mike Mabes was chatting with anybody who would listen (Manhattan staycationers, condo residents, out-of-town guests) about a Ritalin binge he had indulged in at an amateur movie screening the previous night. He was a character so archetypically Williamsburg, he felt almost pre-“Girls” retro. “I’m a regular here,” he said.

But the fact that “pre-‘Girls’ retro” doesn’t exist, or that the Times chose to embody  “archtypically” Williamsburg nu-scene regulars as ADD-drug huffing delinquents who attend “amateur movie screenings” on Ritalin and who is desperate for people to hear him talk, and a plethora of other things that might cause this writer to have an aneurysm doesn’t make it worth it to unpack this any further. Just know that if there was a beginning to the end, than this is the end to that end, the one where none of it matters anymore, where anyone who had invested anything as abstract as the simple desire to preserve a neighborhood from being infiltrated by the most insufferable people—not even in New York, but in America, and after that, the world—is over, and that the New York Times Thursday Styles is the proud torchbearer who guided those people (and even worse: those ideas) across the river, by taxi, no doubt. 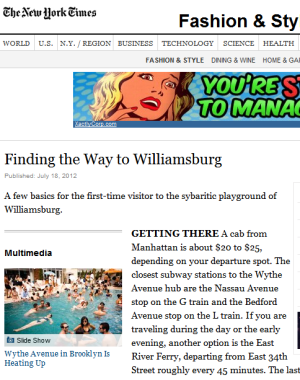