Hobbled by residency questions, the acting education commissioner still received unanimous support toward getting the word “acting” removed from his title when the Senate Judiciary Committee signed off on his appointment.

Beat up in a New York Times story by state Sen. Ray Lesniak for lack of experience in this type of work, Gov. Chris Christie’s appointments counsel is in line to replace veteran Caren Franzini to head the state’s Economic Development Authority (EDA).

Rejected in his quest to become a Supreme Court judge, the former deputy U.S. Attorney resurfaced this week as counsel at the Port Authority of New York and New Jersey.

Bludgeoned in a press conference by Republican Congressional candidate Shmuley Boteach, the Paterson imam attended a party to celebrate Ramadan at the governor’s mansion where the GOP governor gave him a personalized – and very warm – shout-out.

The 9th District incumbent Democrat faces an opponent whose views on Paterson Imam Mohammad Qatanani clash publicly with Gov. Chris Christie’s, who, like Pascrell, is a Qatanani fan.

Last seen unsuccessfully vying for the role of Eddie in a remake of The Munsters, the actor planned a visit to New Jersey to bash gay and lesbian lifestyles, and ended up getting beaten up by Garden State Equality.

The state Attorney General today announced criminal charges against two of the New Jersey State Troopers involved in an “unauthorized” state police escort of high-speed sports cars. The two troopers stand accused of altering their license plates to conceal their identities during the high-speed caravan escort. Sgt. First Class Nassry, a 25-year veteran of the state police, is accused of heading the caravan and is charged with tampering with public records and falsifying or tampering with records. Ventrella was charged with tampering with records.

No slow summer news week is ever complete without the Trenton mayor’s name on the losers list. Pulling a Charles DeGaulle in the face of the FBI, Mack fled the city and has not been heard from or seen since law enforcement officials stormed his house and City Hall last week.

The county GOP is in turmoil with its highest elected official, Hamilton Mayor John Bencivengo, dragging corruption charges wherever he goes on the job, as Democrats futilely try to summon moral outrage while wearing the millstone of FBI target Tony Mack.

They staggered out of a convention more or less divided, with veteran Republican Chairman Bob Yudin attempting to shoulder the seemingly terminally disparate group. Relations between Yudin and the governor were never great, but this week, Christie’s public embrace of Imam Mohammad Qatanani – a key Pascrell supporter – in the face of Rabbi Shumley Boteach’s denunciation of the imam came as a direct indication of fracture between Christie and the Bergen GOP. 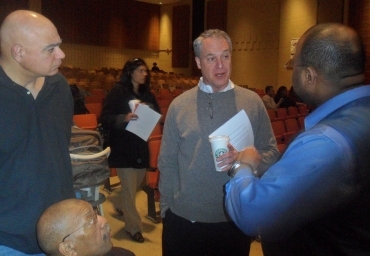