“I have butterflies,” confessed Cara Hodge, Uber’s New York office manager, as we stepped into the yellow Van Leeuwen ice cream truck. With Britney Spears playing in the background, the truck pulled away from the curb and headed down Seventh Avenue, beginning Uber’s one-day ice cream delivery event–complete with a bouncy pop soundtrack, neon tank tops for the customers and one ice cream loving Betabeat reporter.

Uber, an app that allows users to request a ride using their phone, dipped its toes into dessert delivery Thursday, allowing users to request ice cream as they’d usually request rides. Users in San Francisco, New York, Seattle, Chicago, Boston, Washington and Toronto were able to order, at a minimum, $12 worth of ice cream. Minutes later, a truck would magically appear curbside. The New York team had rented out six ice cream trucks for the day–four from Van Leeuwen and two from Coolhaus.

“The goal is to sign people up and just bring ice cream and happiness and fun to our current users,” Ms. Hodge said, trying desperately not to fall over as the truck went over a bump. “It’s just a good way to meet people: Meet them on the ice cream truck, give them some swag.”

After our first delivery, the truck really got exciting as Ms. Hodge and her fellow Uber employee Betty Jin dug into the ice cream (choosing Vanilla and Earl Grey, respectively) and as the driver, Luke Santy, turned on his “party mix.” The first song? Justin Bieber’s “Somebody to Love.”

“This is classic Biebs,” Mr. Santy explained before yelling at a jay-walking pedestrian. “I’m into pre-pubescent Biebs.”

As the truck rocked from the in-car dancing festivities, we arrived at our second stop. Our new group of customers–five slightly nerdy-looking, bespectacled men–was far less eager about the neon pink, blue, orange and yellow tank tops that came free with the ice cream. One of the members gruffly commented, “Give me the darkest one.”

Another in the pack, Dan, said he used Uber while in San Francisco for the Apple Conference, but hadn’t realized it was also available in New York. Adjusting his glasses, he then asked for a pink tank–for his girlfriend, naturally.

Neon tanktops: all the rage.

En route to 31st street, Ms. Hodge explained that the promotional event had largely been organized by an Uber intern, Matt Gibstein, known around the office as “Gibby.”  Though the San Francisco-based start-up came to New York in May 2011, Ms. Jin said that New York harbored the second greatest number of Uber users behind San Francisco.

But Uber’s New York marketing initiatives are clearly lagging if customers like Dan don’t even realize the service has made it to the Big Apple. And compared to San Francisco, New York has a larger fleet of yellow cabs, which can provide a cheaper ride than swank Uber SUVs.

So if providing New Yorkers with black mobster sedans on demand isn’t enough to boost marketing visibility, what’s a startup to do? According to “Gibby,” you give them neon pink tanks and mint chocolate chip ice cream. Someone get this kid a Nobel prize.

The flaw in this otherwise sugary plan was that Uber had a strict rule of only giving ice cream to users who had ordered the truck with the Uber app. At one point, they had to explain to one persistent ice cream aficionado that no, he was not getting any pistachio today. There was also no ice cream for the giddy toddler who sidled up to the truck. Get an iPhone, kid.

Every eligible customer seemed pretty excited about the ice cream delivery service (though one Order In employee did accidentally order a car instead of ice cream), but Ms. Hodge doesn’t think the truck will become a permanent fixture.

“It’s not going to be on the reg,” she explained.

As Betabeat prepared to hop out of the truck and head back to the office, a black SUV crept up to the ice cream truck’s window while we waited at a stoplight. The driver gesticulated madly at Ms. Hodge, who initially thought he was an Uber driver (because his car was so black and creepy). But no, this classic urbanite simply wanted a pink Uber tank. Gibby strikes again. 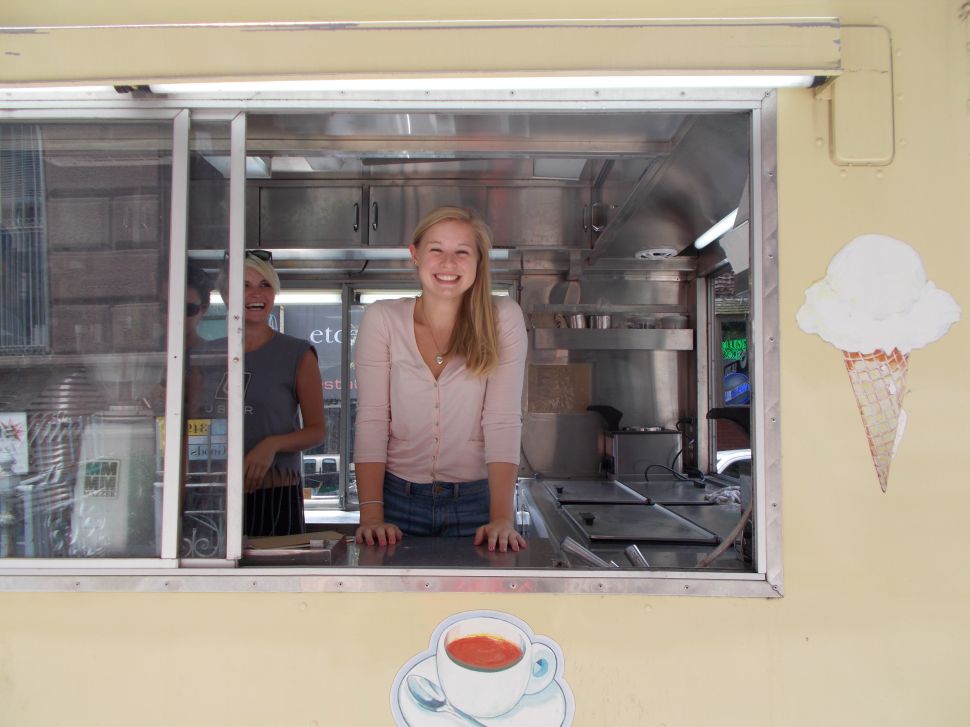