Don’t get struck by lightning when hanging with Bill Gates. (Photo: jurvetson)

We’re calling it: This Mystery Science Theater 3000 trolling  of Sal Khan’s Khan Academy videos, posted in June, was the beginning of an inevitable backlash against the breathless hype about Khan’s abilities as an instructor.

Today, in  “Khan Academy: The hype and the reality” in the Washington Post, math coach and Mathalicious founder Karim Kai Ani put some sting in the criticism with a much more direct, serious approach to criticizing the Bill Gates-backed “Messiah of Math”:

… [The] truth is that there’s nothing revolutionary about Khan Academy at all. In fact, Khan’s style of instruction is identical to what students have seen for generations: a do this then do this approach to teaching that presents mathematics as a meaningless series of steps. Khan himself says that “math is not just random things to memorize and regurgitate,” yet that’s exactly how his videos present it.

Karim Ani’s harshest criticism isn’t directed at Khan as much as at journalists covering Khan Academy’s popularity, who have “confused journalism with sycophantism,” leading to a “suspension of common sense.”

That Sal Khan chose to make his videos freely available and has done so much work to at least help students the world over isn’t lost on his other critics. It seems clear that some–in spite of Khan’s own contention educators are jealous–agree with Mr. Ani. Khan Academy isn’t the problem, the hype surrounding it is. Robert Talbert, who teaches with the math instructors who made the MST3K-style video, wrote this about Khan in early July: “I’m not jealous of, or threatened by, Khan Academy in the slightest. But I’m not an uncritical fan, either, and we need to look at carefully at Khan Academy before we adopt it, whole-cloth, as the future of education.” 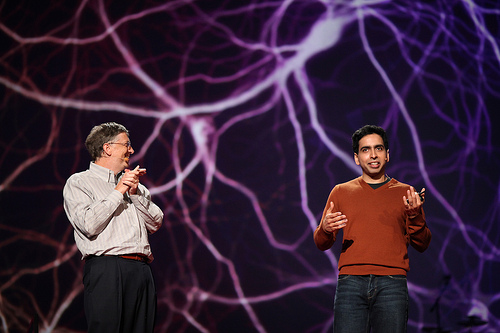