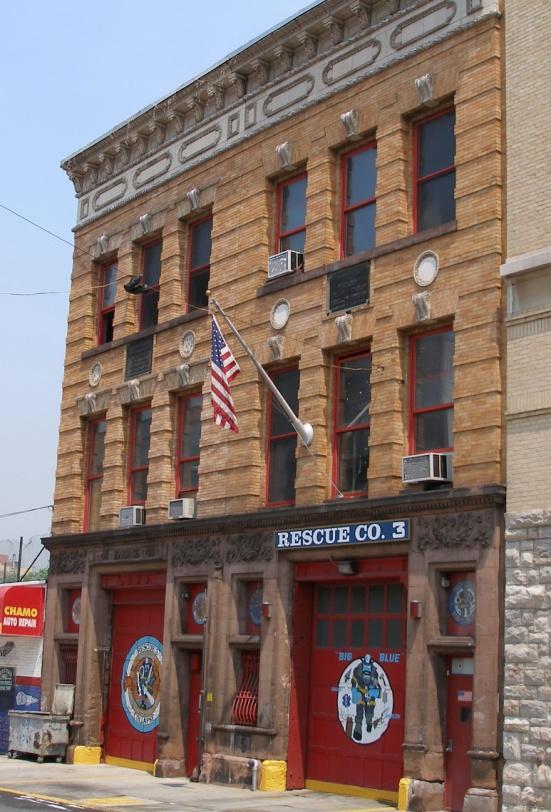 451-452 East 176th Street, The Bronx "Fire Engine Company 46 in the Bathgate section of the Bronx, was designed by the prominent architectural firm of Napoleon LeBrun & Sons, architects for the Fire Department between 1879 and 1895, Erected in two campaigns, the first building was completed in 1894 and the second in 1903 as the population and number of buildings expanded in the Bathgate section of the Bronx. Fire Engine Company 46 is an excellent example of LeBrun’s numerous midblock houses for the fire department, reflecting the firm’s careful attention to materials, stylistic detail, plan and setting. LeBrun’s firm helped to define the Fire Department’s expression of civic architecture, both functionally and symbolically, in more than forty buildings they designed during the period of intensive growth in northern Manhattan and the Bronx. This firehouse, with its classical details such as ornate spandrel panels, dentiled and foliate courses, medallions and corbels, represents the city’s commitment to the civic character of essential municipal services. The building’s original design, with three bays above a large, central vehicular entrance flanked by a smaller window and door was repeated on the second building almost ten years later, creating a substantial street presence that continues to suggest the important role of the Fire Department in the protection of local citizenry."
mchabanobserver 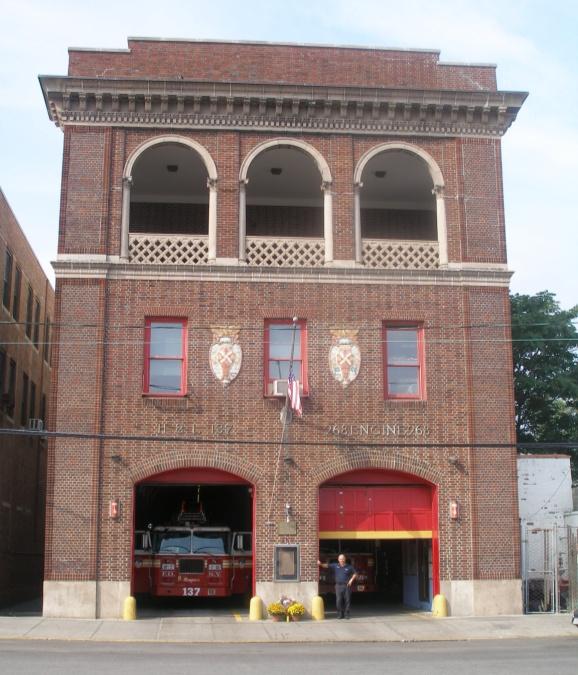 259 Beach 116th Street, Queens "The imposing three-story Firehouse, Engine Company 268, Hook and Ladder Company 137, in Rockaway Park section of Queens, was constructed in 1912-13 to serve the growing population of the Rockaway Peninsula, which had an increasing number of permanent residents following the completion of a train tunnel under the East River connecting Queens to Manhattan. Fire Engine Company 168 was organized on November 28, 1905 to replace a volunteer fire company when the paid fire department was extended to the Rockaway Peninsula. In 1913 the company name was changed to Fire Engine Company 268 when many fire companies throughout the city were renumbered so that no two companies would have the same number. Hook and Ladder Company 137 was organized that same year. In 1912 the Fire Department Commissioner decided that 15 of the 45 new fire houses constructed that year would have roof gardens for physical exercise. Three fire houses, including this one, were constructed with covered gardens; all three are nearly identical and were designed by prominent Brooklyn architect Frank J. Helmle. The firehouse, designed in the Colonial Revival style with Arts & Crafts elements, combines elements of these two popular early 20th century architectural styles. Characteristic of the Colonial Revival style are the symmetrical red-brick facade laid in Flemish double-stretcher bond, classical-inspired arched loggia, and projecting cornice with classical details. The Arts & Crafts style elements include the simplicity of the overall design, multi-color header bond laid in a diamond brick pattern at projecting brick piers, the ceramic seals, and the stepped parapet wall. The firehouse continues to serve the Rockaway Park community today."
mchabanobserver 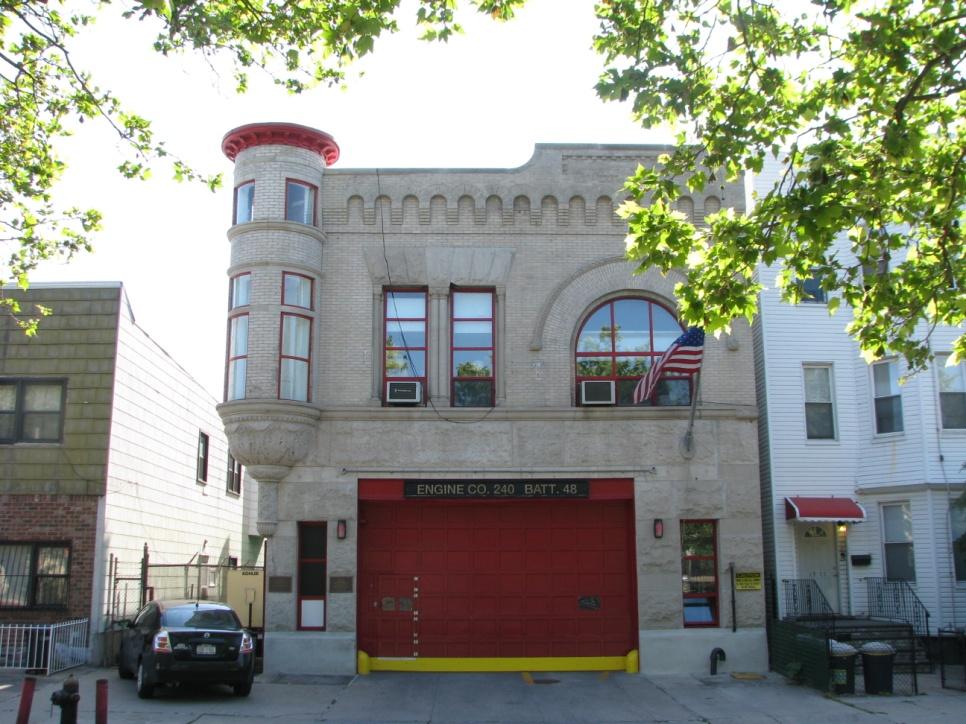 1307-1309 Prospect Avenue, Brooklyn "The Firehouse for Engine Company 40/ Hook and Ladder Company 21 was built in 1895 as part of a campaign by Brooklyn Fire Commissioner Frederick W. Wurster to replace the old firehouses housing the volunteer fire companies in Brooklyn’s recently annexed districts with new up-to-date buildings suitable for modern equipment and full-time paid professional staff. It is one of eight firehouses that the noted Danish-immigrant architect Peter Lauritzen designed for the Brooklyn Fire Department between 1894 and 1897 and is his finest in the Romanesque Revival Style, a style favored for Brooklyn firehouses of the period and one in which Lauritzen was particularly at home. The building’s imposing limestone and brick façade features an asymmetrical design, with a rusticated ground story, round corner turret richly decorated with Romanesque motifs, a round arched window set off by a drip molding with label stops, a flat-arched double-window flanked by colonettes, an elaborate arched cornice, and an asymmetric parapet. The quality of the building’s materials, workmanship, and details distinguished it from the residential and commercial buildings in the neighborhood and were intended to create a sense of civic pride. Engine Company 40, now Engine Company 240, has been housed in its present building and has served the Windsor Terrace neighborhood with distinction for over a century. Since 1978, the building has also been home to Battalion 48, which oversees Fire Department units within Park Slope, Windsor Terrace, and Borough Park."
mchabanobserver 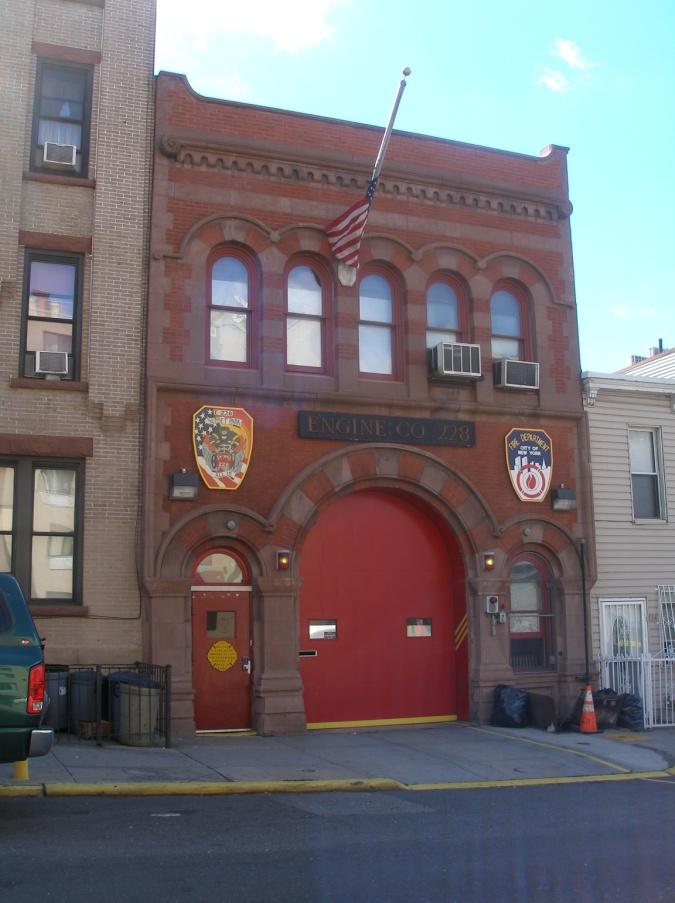 436 39th Street, Brooklyn "Firehouse, Engine Company 28 (now Engine 228) was organized in 1890 in response to the growing population and number of buildings in the Sunset Park area of Brooklyn. First located in rented quarters at 945 4th Avenue, this house was opened in December, 1890. The Brooklyn Fire Department was established as a paid department in 1869 until Consolidation with the City of New York in 1898. Under the reorganization at that time this house was renamed number 128 and during a later reorganization it became Engine 228, which it has remained until today. This strong Romanesque Revival style building, with stone and brick facade, large, round-arched openings and decorative moldings provides a distinctive presence on the busy streets of Sunset Park that began to be developed with commercial and residential buildings in the 1890s. The existence of this firehouse continues to provide a strong civic presence in this section of Brooklyn."
mchabanobserver
Advertisement 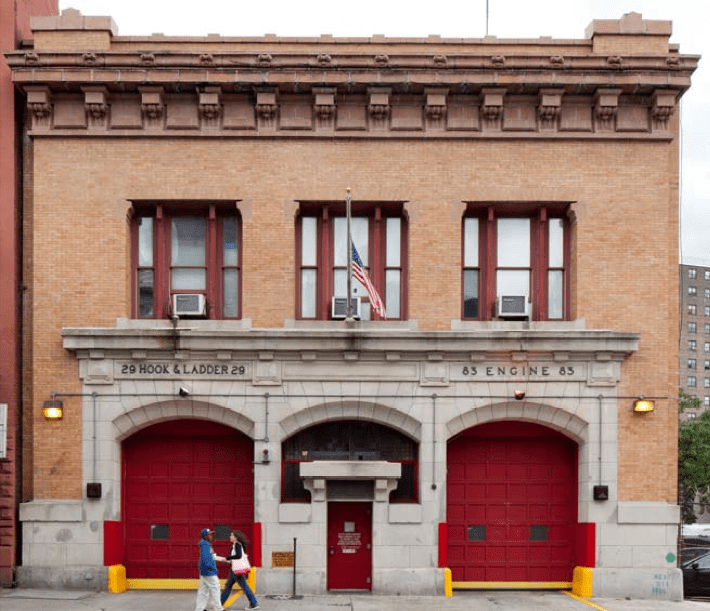 The following firehouses were designated June 12. 618 East 138th Street, The Bronx "Located between St. Anns and Cypress avenues in the Mott Haven section of the Bronx and completed in 1905, Engine Company 83, Hook & Ladder Company 29 was one of numerous municipal buildings constructed throughout the City following the consolidation of all five boroughs in 1898.The Neo-Classical style two-story firehouse was designed by Robert D. Kohn, one of only a handful of American architects who produced designs between 1904 and 1915 that were influenced by the Viennese Secessionist Movement. Kohn’s other commissions include the New York Evening Post Building at 20 Vesey Street in Manhattan, the Spero Building at 23 West 21st Street in Manhattan and the New York Society for Ethical Culture at 2 West 64th Street in Manhattan, all of which are landmark buildings. Kohn, a founder and president of the New York Building Congress, was the director of the housing division of the Public Works Administration from 1933 to 1934 and vice president of the 1939 New York World’s Fair. His later commissions included additions to the R.H. Macy & Co. Department Store at 34th Street and Seventh Avenue and the Auerbach & Sons factory at 628- 644 11th Avenue. Engine Company 38, an early example of a two-vehicular bay-firehouse, which served for the next 25 years as the prototype for firehouse design, is clad with salmon-colored brick with a three-bay limestone enframement on the first floor and a bracketed terra cotta cornice. The subtle references to the Vienna Secession include the concave segmental arches of the enframement, the entablatures of the central pedestrian entrance and the terminating elements of the roof parapet."
mchabanobserver

330 East 150th Street, The Bronx "Located between Courtlandt and Morris avenues in the South Melrose section of the Bronx and completed in 1903, Engine Company/Squad 41 was one of the first firehouses constructed in the Bronx following the consolidation of the City’s five boroughs in 1898 and a tremendous increase in population.The Renaissance Revival style three-story building was completed in 1903 and was one of seven designed by Alexander Stevens, the FDNY’s superintendent of buildings as part of a building campaign by the City to expand the delivery of municipal services. Stevens followed the pattern established by Napoleon LeBrun & Son, the noted architectural firm which designed 42 firehouses for the Department between 1880 and 1895. Engine Company 41’s facade is comprised of three bays and faced in ashlar limestone on the first story and most of the second story, with brick above. A stone eagle and a recessed panel filled with shields, swags and medallions surmount the building’s central arched opening. The Fire Department in 1990 designated the firehouse as a squad, a category of emergency responders with specialized expertise that responds to more and higher levels of alarms outside its immediate service area. The company lost six firefighters in the Sept. 11, 2001 terrorist attacks that destroyed the World Trade Center."
mchabanobserver 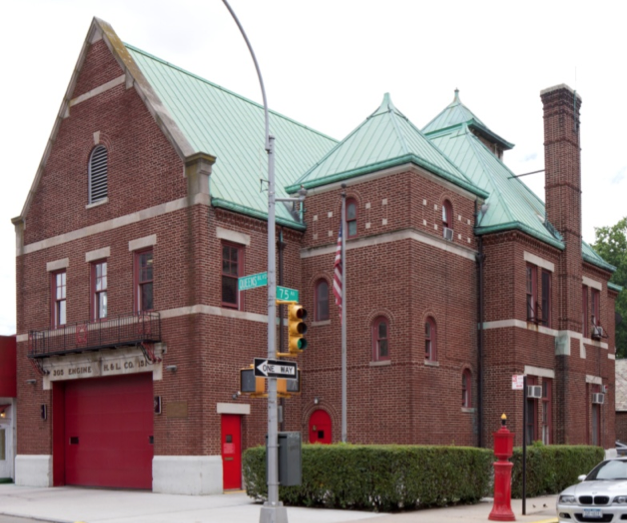 111-02 Queens Boulevard, Queens "Located at the corner of 75th Avenue in the Forest Hills section of Queens and completed in 1924, Engine Company 304, Hook & Ladder Company 151 was built to serve the growing population of the neighborhood, which saw a boom in residential construction after World War I. The Neo-Medieval style two and 2 1⁄2-story firehouse was attributed to John R. Sliney, the Fire Department’s head building inspector who oversaw the construction of 70 firehouses throughout the city between 1906 and 1933. Engine Company 304, Hook & Ladder Company 151 represented a departure from its flat-roofed, rectangular-shaped contemporaries that predominated firehouse construction at the time. The firehouse, whose motto is “Pride of the Hills,” is an asymmetrically massed red brick building that’s accentuated by steep gables clad with copper standing-seam roofs, prominent square towers (including a stair tower and a hose-drying tower) featuring round-arched window openings and a slender chimney rising nearly a story above the west side of the building."
mchabanobserver 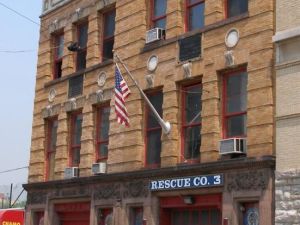 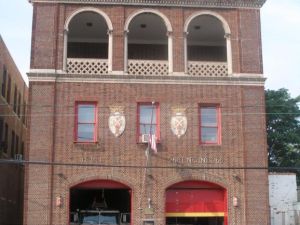 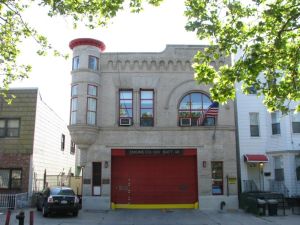 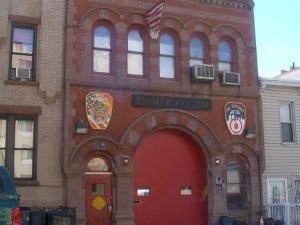 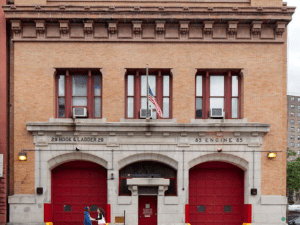 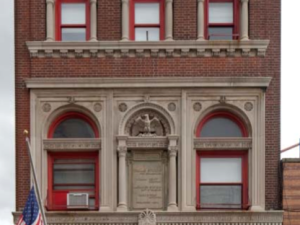 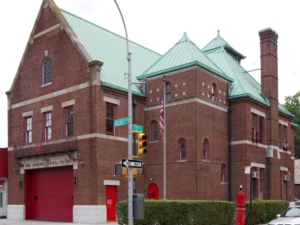 Usually firemen are rushing into other peoples’ homes to rescue them. Yesterday, the Landmarks Preservation Commission was the savior, going into five different turn-of-the-century firehouses to consider them for preservation.

In addition to tabling the Rainbow Room and designating a Queens cemetery as the city’s newest landmark, the commission also calendared five historic firehouses, two each from the Bronx and Brooklyn and one from Queens. This follows the designation in June of three old firehouses in the Bronx and Queens [PDF].

The effort is part of a big push by the commission to preserve historic municipal architecture. This has long been important, but the commission is putting added emphasis on it in the coming year. Recently, staff conducted a survey of 16 police precincts in Brooklyn; 23 firehouses in the Bronx, Queens, Brooklyn and Staten Island; 16 public schools in Queens, Manhattan and Brooklyn; and 15 libraries in Brooklyn. Some number of these will doubtless go before the commission in the coming months, though not necessarily all of them—only those deemed exemplary examples of period architecture or possessing special historic significance.

“One of our priorities, in addition to extending landmark status to more sites and neighborhoods outside of Manhattan, is to protect New York City’s great public architecture,” Commission Chair Robert Tierney told The Observer. “These municipal buildings and structures were an expression of civic pride and ambition that in many ways define us as a city then and now.”

Since Mr. Tierney took over the commission nine years ago, it has designated more than two dozen municipal landmarks, including the 10 well-known Robert Moses-era WPA pools; a public bath on 54th Street, now a Parks Department rec center; eight firehouses, including the three in June (but not these five new ones); four libraries; four public schools; the Long Island Branch of the New York State Supreme Court in Queens; and Morningside Park.

“They anchored the neighborhoods they originally served and were designed with that role in mind,” Mr. Tierney said. “They are the ultimate expressions of civic character. They also reflect the City’s aspirations and sent a signal about the direction in which it was headed, and they set a benchmark for great design for the City’s public projects that continues to this day.”

You can see in the accompanying slideshow the five firehouses just proposed as well as the three that were approved in June, all with text from the commission explaining their significance.