NPR’s Planet Money—which was born out of the Peabody award-winning This American Life episode about the financial crash in 2008, “The Giant Pool of Money”—is the financial news digest of choice for plenty of people who enjoy their finance explained to them in a generalist, Ira Glass-approved tone. Now, the show and Davidson are coming under fire for some perceived standards and ethics breaches. Let’s break this down.

Yasha Levine and Mark Ames, writing for their own site, The S.H.A.M.E. Media Transparency Project, which opened shop on in March. As Russian expats, both helped co-found the satirical Russian alt-biweekly The eXile (another co-founder: Rolling Stone political columnist Matt Taibbi), which still lives on, online. More recently, the duo were widely credited with having connected the Koch Brothers to the Tea Party (after Playboy all but erased from existence the original piece in which they initially made the connection for the magazine).

Adam Davidson, the co-host and co-founder of NPR’s Planet Money. Prior to Planet Money, Davidson worked for NPR as an international business and economics correspondent for NPR, and was a Middle Eastern correspondent for Public Radio International. Aside from co-hosting Planet Money, Davidson also has a gig as a regular columnist for The New York Times Magazine and, according to Levine and Ames, makes decent coin on the side with speaking engagements too. Here’s his NPR biography. Here’s Levine and Ames’s biography of him.

First, that a notoriously hostile 2009 Planet Money interview between Davidson and Elizabeth Warren—the special adviser to the Consumer Financial Protection Bureau—was ethically tainted by Planet Money‘s financial arrangements with “the sole sponsor underwriting Davidson’s Planet Money show and his salary.” Levine and Ames argue that the sponsor in question—a financial services conglomerate—lobbied against the creation of the CFPB before it was created (and around the time of the interview), which is evidence of an insidious conflict of interest. Furthermore, they allege that Davidson is accepting speaking fees from the industry he covers for both NPR and The New York Times Magazine, something largely viewed as an unsavory, questionable practice by most journalists (and journalism institutions, which usually have guidelines against that sort of thing).

A Sponsorship Problem: Ames and Levine published a 2009 lobbying report signed by the financial conglomerate in question, GMAC (now Ally Financial), in which the company discloses lobbying against the Consumer Financial Protection Agency Act of 2009, which created the CFPB that Elizabeth Warren now acts as a special adviser to. To them, this disclosure speaks great volumes about Davidson’s coverage, particularly a 2009 interview between Davidson and Warren. At the time, Warren was lobbying for the act (as she was its architect), which set out to create an agency that would protect consumers from predatory practices by companies like GMAC/Ally Financial. During the interview, Davidson was so surprisingly hostile towards Warren that it famously warranted an apology from NPR’s ombudsman.

[Ally (formerly GMAC), the consumer-lending arm of General Motors, is 74 percent owned by the government after receiving a $17.2 billion bailout. Even as other financial firms have emerged from the darkest days of the financial crisis, Ally has remained in the government’s debt, due to the struggles of Residential Capital, the Ally-owned mortgage lender that recently entered Chapter 11 bankruptcy.]

Meanwhile, Ally had sponsored the show since shortly after it had launched, in an arrangement that raised eyebrows when it was initially revealed. Ames and Levine note that at that time, Planet Money was the only NPR show with a single sponsor.

The Speaking Gigs: They’ve compiled some of Adam Davidson’s “lucrative” speaking gigs, hosted and funded by some of the largest financial institutions in the world (JPMorgan, Wells Fargo, Bank of America and Goldman Sachs). While a widespread practice, it’s one that in their eyes—and the eyes of many others—compromises journalistic integrity.

We could not find the issues of sponsorship directly addressed in NPR’s handbook, other than a section on the necessity of disclosures. But the issue has come up even after that section was added in. However: NPR’s current ethics guide does mention avoiding speaking to groups where the appearance itself might put into question one’s impartiality, along with participation in forums where “sponsoring groups or other participants are identified with a particular perspective.” The policy of Chicago Public Media (which owns This American Life, from which Planet Money was spun off): “Journalists may not accept any form of compensation from the individuals, institutions or organizations they cover.” Finally, the New York Times‘ standards and ethics guide urges staffers to be wary of speaking gigs “especially if the setting might suggest a close relationship” to the sponsor, and notes that gigs must be approved by newsroom management. The example they give: “An editor who deals with political campaigns might comfortably address a library gathering but not appear before a civic group that endorses issues or candidates. An environmental reporter can appropriately speak to a horticultural society but not to conservation groups known for their efforts to influence public policy.”

We couldn’t find any examples of NPR ending a sponsorship relationship because of a radio segement or program’s purview. That said, Planet Money‘s sponsorship agreement with Ally has come under question both internally and externally prior to this.

An NPR ombudsman concluded in December 2009:

[NPR senior vice president for news, Eileen] Weiss is correct that NPR has a large pool of credibility with most of its audience. But that pool is not infinite, and it can be diminished when listeners perceive a conflict of interest, even if one does not exist.

No action was taken then. This was nine months after Davidson’s interview with Warren, which prompted an on-air apology from Davidson and an NPR ombudsman’s column reprimanding Davidson. That column ran five days before Planet Money‘s deal with Ally was written up on AdAge.

What do other Times writers think of the policy? Ask Paul Krugman:

I do very little paid speaking now, and no consulting, because the New York Times has quite strict rules: basically I can only get paid for speaking to nonprofits that have no possible interest in influencing the content of the column. It’s a good rule — read Eric Alterman’s book “Sound and Fury” to see how speaking fees can corrupt pundits — though it meant that I took a substantial income cut to work for the Times.

Planet Money has indeed covered Ally once before, in a segment derided by an Ally publicist as “false” and “inflammatory.” There is no empirical evidence that Davidson—who, in his words, has “nothing to do with the underwriting stuff”—has explicitly interacted with his sponsors in a way that would undoubtedly compromise his show’s integrity. Levine and Ames have no proof of Davidson’s pay for his speaking gigs (though there’s been no denial that he was paid).

An NPR spokesperson refused comment to Ames and Levine. They also contacted Ira Glass of This American Life, who also did not respond to their request for comment.

The Observer contacted an NPR spokesperson for comment through their communications department on Wednesday evening. We asked why they didn’t comment to Ames and Levine, if Davidson’s speaking engagements are of concern to NPR, and if—in light of the lobbying disclosure form vis-à-vis Davidson’s (as noted by their own ombudsman) surprisingly hostile interview with Elizabeth Warren—Planet Money‘s sponsorship by Ally Bank was a concern to them. At the time, a spokeswoman answered:

I expect we’ll give you comment on why we didn’t comment before, and perhaps on some of these issues you raise.

Adam reviews all his speaking engagements with his editors and we’re confident that none of them run counter to our ethical guidelines.

We have discussed this situation with Adam and we’re confident that there has been no violation of our policies around speaking engagements and no conflict of interest.

When contacted by email Wednesday evening, Ames and Levine had this to say over email:

Until NPR answers these questions and fully discloses the nature of their relationship with Ally Bank, and their conflict-of-interest policy, everything else is a PR distraction. We have provided strong evidence of several very serious conflicts of interest. Evasions and distractions that avoid answering these allegations and questions, like the ones provided by their ombudsman back in 2009, will only reinforce our point about corruption at Planet Money.

They also pointed us to a March 2009 Columbia Journalism Review profile of NPR, which they provided as speaking to proof that “Davidson was in the very least intimately involved in the process of creating the show,” which it certainly does. Again, that doesn’t explicitly tie Davidson to Ally Bank’s interests.

That said, Ames and Levine’s takeaway isn’t so forgiving:

This says pretty much everything you need to know about the gangrenous state of America’s media, when two of the most respected media institutions adopt a mob strategy to protect their little racket.

At the very least, they have indeed made a compelling case that Davidson is—if not complicitly, then inherently—conflicted. Either way, it’s a conflict that’s clearly uncomfortable to more than two people, regardless, and a few who’d rather not discuss it as well. 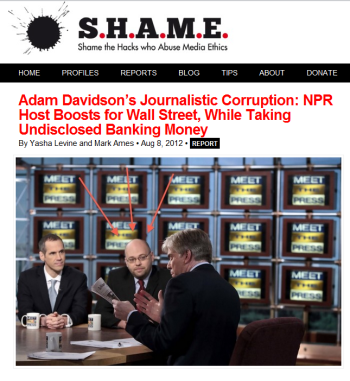