Most of the current Alighiero Boetti retrospective at the Museum of Modern Art is housed in the second-floor atrium and on the sixth floor, but there’s one work tucked away in the sculpture garden, surrounded by a pile of stones and a few warning signs. That’s Boetti’s 1993 Autoritratto (Self-portrait), a bronze sculpture of the artist that is heated with electrical equipment inside his head (“Please do not touch,” those signs state). 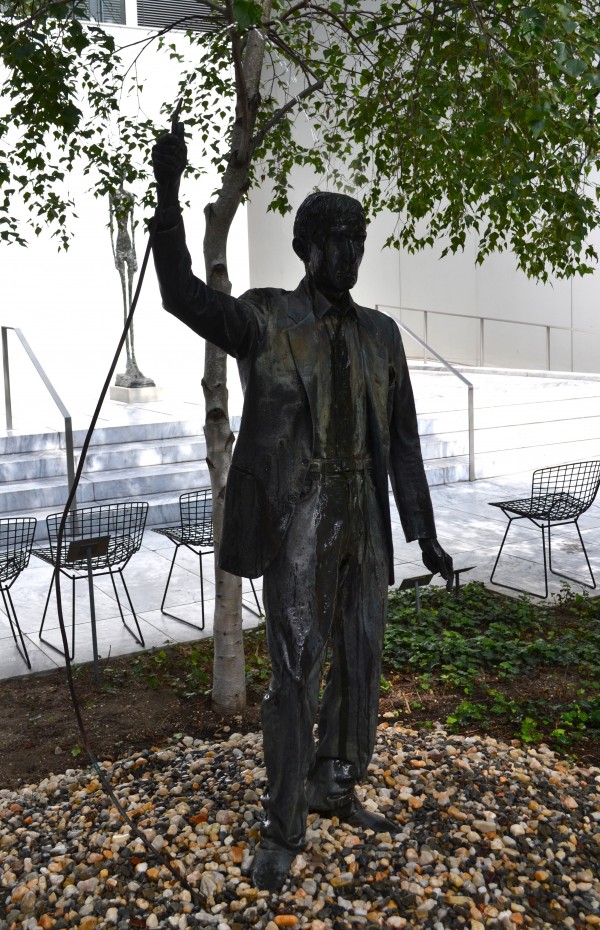 In the work, which is sightly smaller than life size, Boetti holds a thin hose that steadily feeds a stream of water onto his head. It partially evaporates into a haze of steam as he stands there, and the rest glides down his body. That steam was faint but visible on this relatively warm summer morning, but one imagines that the effect will become even more dramatic as the temperature drops in September. The show closes Oct. 1.

The exhibition’s co-curator, Christian Rattemeyer, MoMA’s associate curator of drawings, says in a succinct audio guide that this is the artist’s final self-portrait, and it is “as if Boetti’s brain is so active that it needs constant cooling, as if, in the last year of his life”—he died the next year of brain cancer—”the artist is literally burning up from the inside with creativity.”

Throughout his career, Boetti removed himself from the production of his art. He had Afghani and later Pakistani women produce his most iconic pieces, his world maps, and let them inscribe their own messages along their borders. When he appeared in his works, it was often only in the most tenuous or tangential ways—as a barely visible ghost of a face in a 1969 photocopied self-portrait, in the form of the date he predicted for his death in a 1971 engraving or as two identical twins, Alighiero and Boetti, in a 1968 photomontage.

But here, at the end of his life—less than 20 years ago, which is hard to believe—he’s standing right in front of us. As he douses himself with water, he doesn’t look altogether happy—he’s burning up with creativity, his head is stuck in a cloud—but he does look determined to deliver one last visual marvel, even at his own expense.