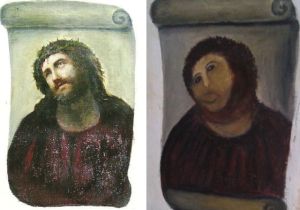 The fresco, before and after. (Courtesy El Pais)

An octogenarian neighbor of the Santuario de Misericordia church in Borja, Spain recently took it upon herself to restore Ecce Homo, a 19th-century fresco in the church by painter Elías García Martínez. It didn’t go so well.

The story comes from Gawker, via Reddit, the Centro de Estudios Borjanos and El Pais  (taken from the local paper El Heraldo de Aragón), which notes that local culture councillor Juan Maria de Ojeda said the amateur restorer had acted “with good intentions” though “without asking permission.” The whole matter was made much worse by the fact that Martínez’s granddaughter had just given the Centro de Estudios Borjanos a significant donation. And the fact that this work was the only known one by the artist in Borja.