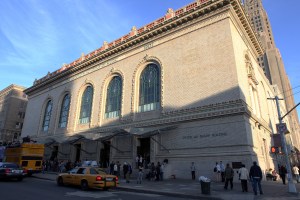 The Brooklyn Academy of Music, which is in the midst of celebrating its 150th anniversary, just announced that it got another feather in its cap. It received a four-year grant of $1 million from the Leon Levy Foundation to create a new digital archive to launch in May 2015.

The Leon Levy BAM Digital Archive will be a kind of greatest hits of the collection of BAM, the oldest performing arts center in the U.S. The digital archive will present an online portal to a selection of the holdings of the BAM Hamm Archives, which houses everything from Civil War memorabilia to photographs and footage from the early performances of Merce Cunningham and Robert Wilson—roughly 3,000 feet of archival materials beginning from 1856 up through the present.

“Every presidential candidate made campaign stops there before there was television. Mary Todd Lincoln was in the audience during the opening week of festivities,” BAM President Karen Brooks Hopkins told Gallerist. “Then you have [Rudolph] Nuryev making his first performance in the West just after he defects, [Martha] Graham performing her last performance on stage…. The largest fundraiser for the Sanitary Fair, which was the precursor to the Red Cross, raised money to buy bandages for Union soldiers in the field. That took place at the Brooklyn Academy of Music in 1864.” Asked how much they raised, Ms. Hopkins said, “$400,000. That’s a lot of money now. Think about how much money that was in 1864?”