Remember the graffiti from a few years ago, the stripe down the sidewalk dividing it between New Yorkers and tourists? If ever there was a place for such a demarcation, it would be the Brooklyn Bridge, where wayward out-of-towners and death-courting cyclists do battle on a daily basis.

“We are issuing a call to expand the human capacity of the bridge,” Councilman Brad Lander of Park Slope declared at the Manhattan entrance to the 129-year-old span yesterday. An average of 4,000 pedestrians and 3,100 bicyclists cross the Brooklyn Bridge every day, according to the Department of Transportation. A good many of them have close encounters of the two-wheeled kind.

Along with a few colleagues in the council, Mr. Lander wants the city to consider expanding the narrow boardwalk atop the beige bridge to accommodate more passengers. The plan calls for tripling the crossing’s width, to the current size at the piers. This would create twice as much room for pedestrians as well as a dedicate lane for bikes.

Currently, the two mix in the narrow strip, with many near misses as bikes swerve around slow walkers and photographers unwittingly back into oncoming traffic for that perfect shot of the new Frank Gehry building.

“Everyone knows that the Brooklyn Bridge is such a popular tourist destination, we want to make sure the bridge is safe” Councilwoman Margaret Chin, who represents Lower Manhattan, said. “To maintain a healthy New York, it’s important to expand the walkway.” Because nothing is worse for your health than a big fat tire print.

The council members admit they have yet to explore the feasibility of the project, though they acknowledge the engineering challenges and cost could be considerable. At the same time, a new walkway was added to the Williamsburg Bridge when it was rehabilitated by the Bloomberg administration, so the pols are hopeful the same could be done here. It could even become a matter of debate during the upcoming mayoral elections.

But when they represent some of the most bike-crazed constituencies in the city, something must be done. “The Brooklyn Bridge belongs to all New  Yorkers,” North Brooklyn Councilman Steve Levin said. “It was an amazing engineering feat in its age, but in 2012 it’s time to update it a bit.” 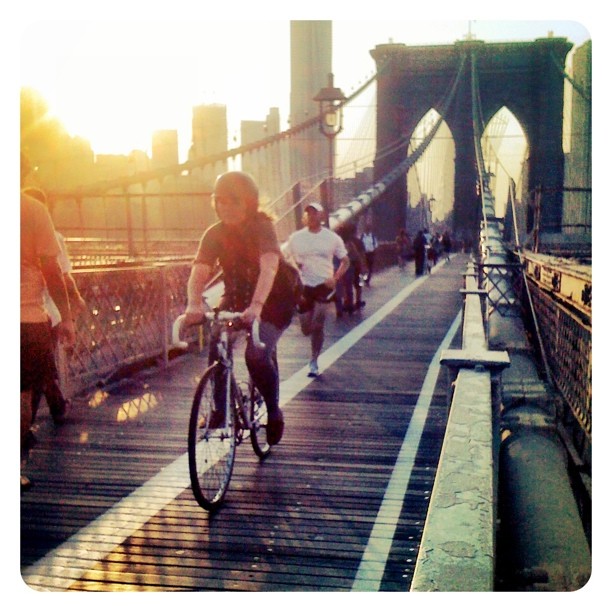