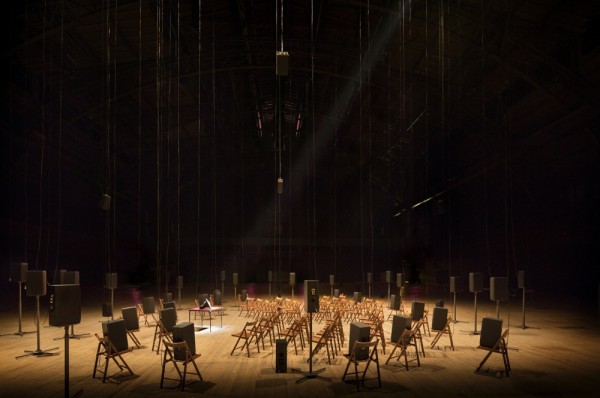 As the rest of the New York art industry hibernates through August, the Upper East Side is suddenly alive with activity. Today the Park Avenue Armory held a press preview for its exhibition of Janet Cardiff and George Bures Miller’s The Murder of Crows sound installation, which fills the dimly lit 55,000-square-foot Drill Hall with scores of speakers. It includes monologues of horrifying dreams and passages from orchestral works, rock songs and Tibetan prayers. At one point a speaker at the dark end of the hall threatens bodily harm. (No spoilers here.) “I know something terrible is going to happen,” Ms. Cardiff’s voice intones through one speaker. 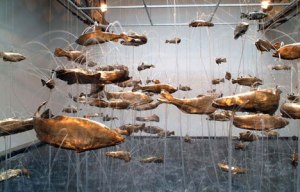 Meanwhile, on the sixth floor of its home at 980 Madison Avenue, Gagosian Gallery is showing Bruce Nauman’s One Hundred Fish Fountain, which is just about what it sounds like. Scores of bronze fish that are hanging throughout the room on thin metal wires and have sprung leaks shoot water out of their bodies, offering an unusually dignified—and consequently sublime—form of absurdity. The work was was shown in Dia:Beacon’s basement galleries a few years ago, and while it looked more at home there, next to windows that looked out on the field behind the museum, it’s a remarkable sight at Gagosian. It turns that pristine white box into a surreal water park.

Though the works’ tones are superficially very different—dramatic and almost baleful in the case of the Cardiff/Miller, carnivalesque in the case of the Nauman—they have some notable formal similarities, and a rare sense of polished completeness, a rare thing in art nowadays. Below, a brief comparison of facts.

If you’re in town this month, take an afternoon off and see both, since it’s possible we won’t see them again here soon—The Murder of Crows will return to Vienna and One Hundred Fish Fountain is presumably on the market and could disappear into a private collection. A museum should step up and buy it. For the next few weeks, though, they belong to New Yorkers.