“Governor Romney released an ad today alleging that the Obama administration had weakened the work requirements of the 1996 Welfare Reform Act. That is not true,” President Clinton said.

The Romney campaign’s charge that President Obama is eliminating welfare reform is based on a directive issued last month by the Department of Health and Human Services that allowed states to apply for waivers lowering the requirements for people to qualify for assistance through the Temporary Assistance for Needy Families program. The Obama campaign has responded by arguing the waivers merely allow states flexibility to find “welfare to work programs that are best for them” in the difficult economic climate and that “the waivers can’t be used to weaken welfare reform” because “states that get waivers have to increase job placement by 20 percent.”


“The act emerged after years of experiments at the state level, including my work as Governor of Arkansas beginning in 1980. When I became President, I granted waivers from the old law to 44 states to implement welfare to work strategies before welfare reform passed,” said President Clinton. “After the law was enacted, every state was required to design a plan to move people into the workforce, along with more funds to help pay for training, childcare and transportation. As a result, millions of people moved from welfare to work.”

President Clinton also noted support for the waivers from Republican governors and Mitt Romney’s past requests for changes to welfare reform as governor of Massachusetts.

“The recently announced waiver policy was originally requested by the Republican governors of Utah and Nevada to achieve more flexibility in designing programs more likely to work in this challenging environment.  The Administration has taken important steps to ensure that the work requirement is retained and that waivers will be granted only if a state can demonstrate that more people will be moved into work under its new approach,” President Clinton said. “The Romney ad is especially disappointing because, as governor of Massachusetts, he requested changes in the welfare reform laws that could have eliminated time limits altogether.  We need a bipartisan consensus to continue to help people move from welfare to work even during these hard times, not more misleading campaign ads.”

Along with President Clinton’s statement, the Obama campaign released a new web video this morning dubbing the welfare reform attack “dubious” and calling Mitt Romney “flexible on welfare and the truth” for his past calls for changes to welfare reform. The Romney campaign also released a web video highlighting President Obama’s opposition to the original Welfare Reform Act as a local politician in Chicago. 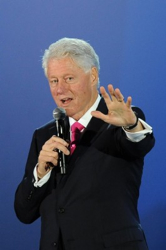