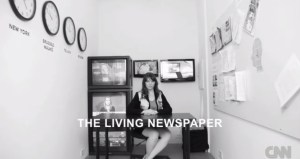 Yes, that headline is correct. CNN has commissioned a number of artists to make work on the theme of “Power,” and is now hosting on its website a piece by Liz Magic Laser called Push Poll, a gloriously unhinged examination of political polling.

The work was filmed as part of Ms. Laser’s residency at Lower East Side/Chinatown space Forever & Today Inc., and features work shot during a convening of curator Summer Guthery’s Canal Series. Including excerpts of several Laser performances, Push Poll has a pretty stellar selection of guests—Observer contributor Anthony Haden-Guest, for one.

Click the video below to give the work a look. Ms. Laser’s residency at Forever & Today Inc. runs through Aug. 31, and there will be a reception there tomorrow, Friday, Aug. 24, at 6 p.m.