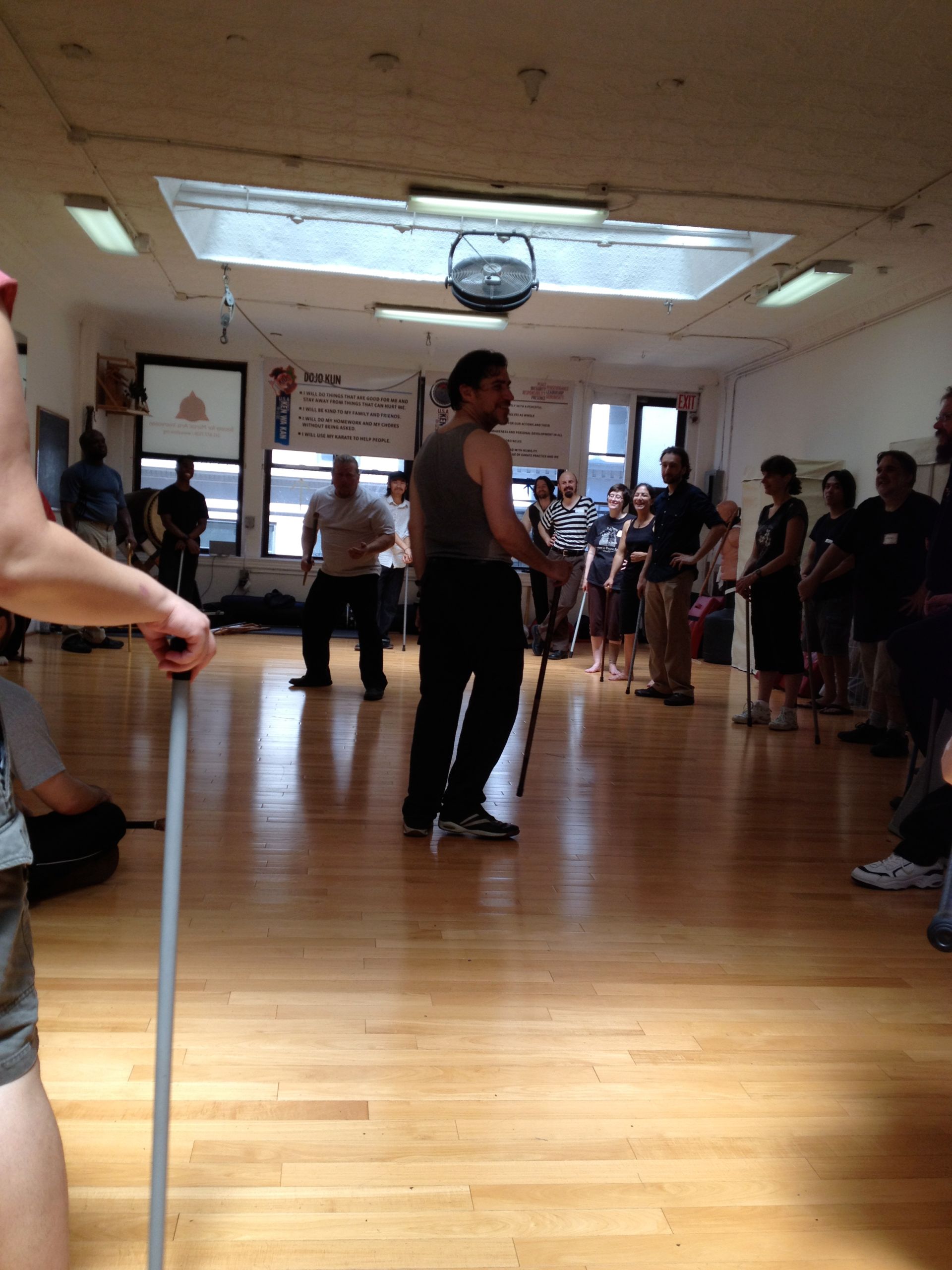 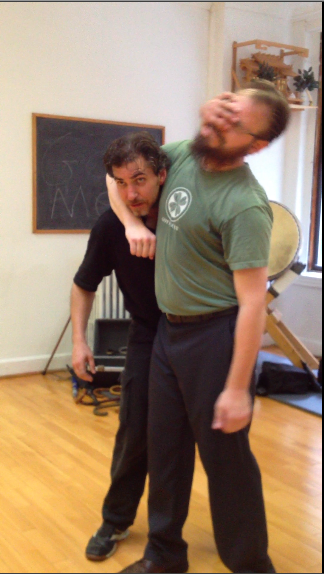 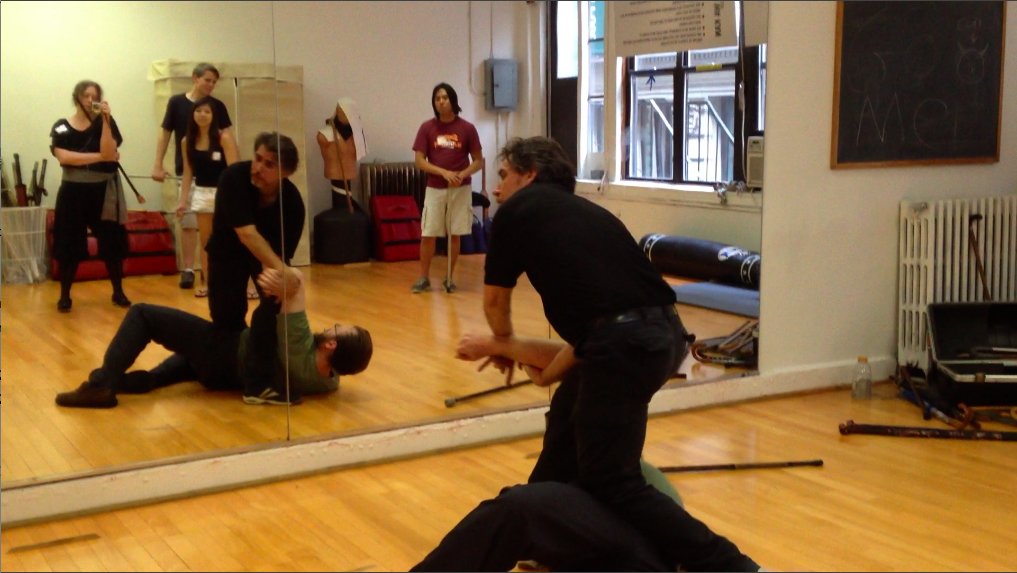 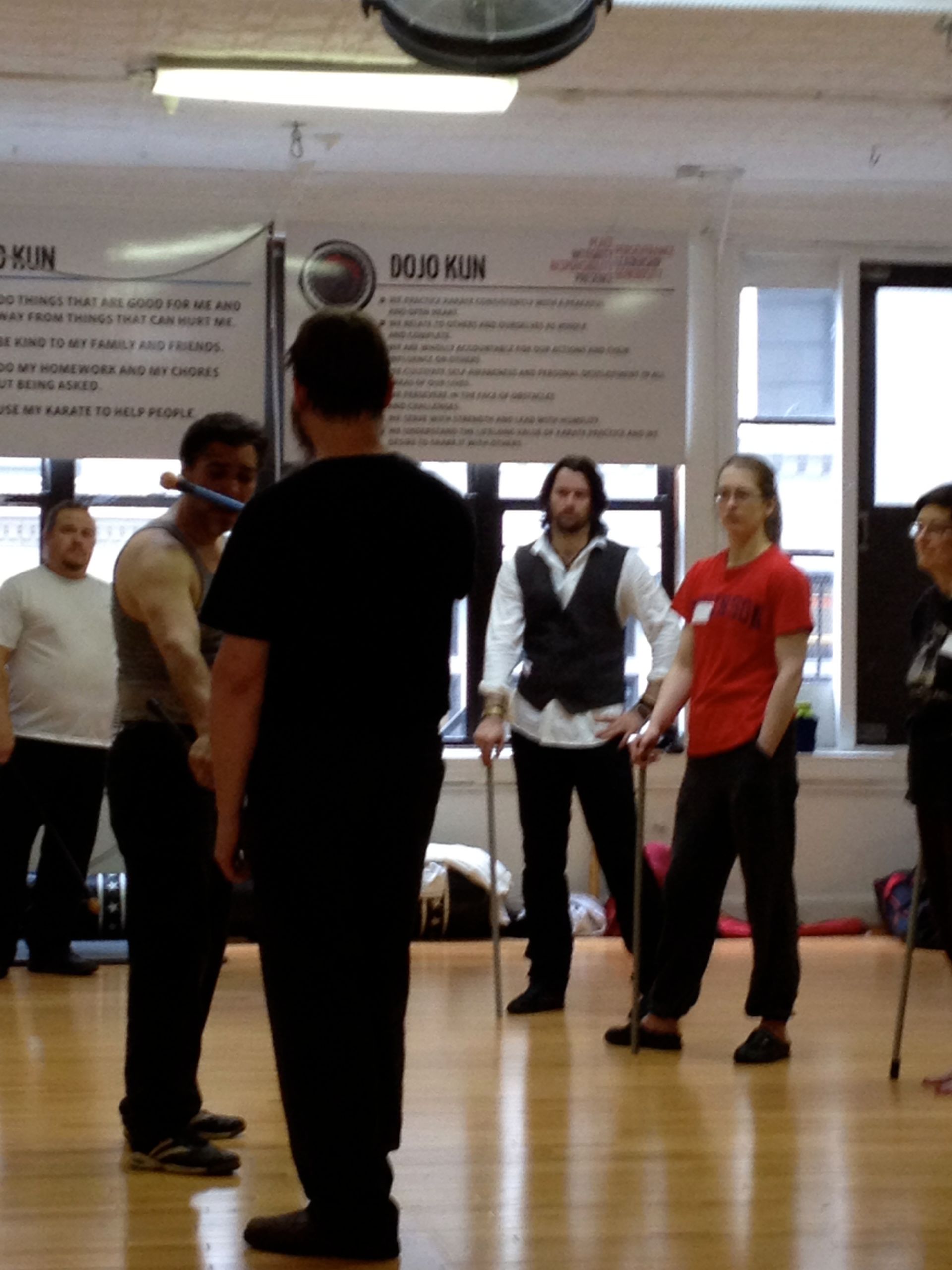 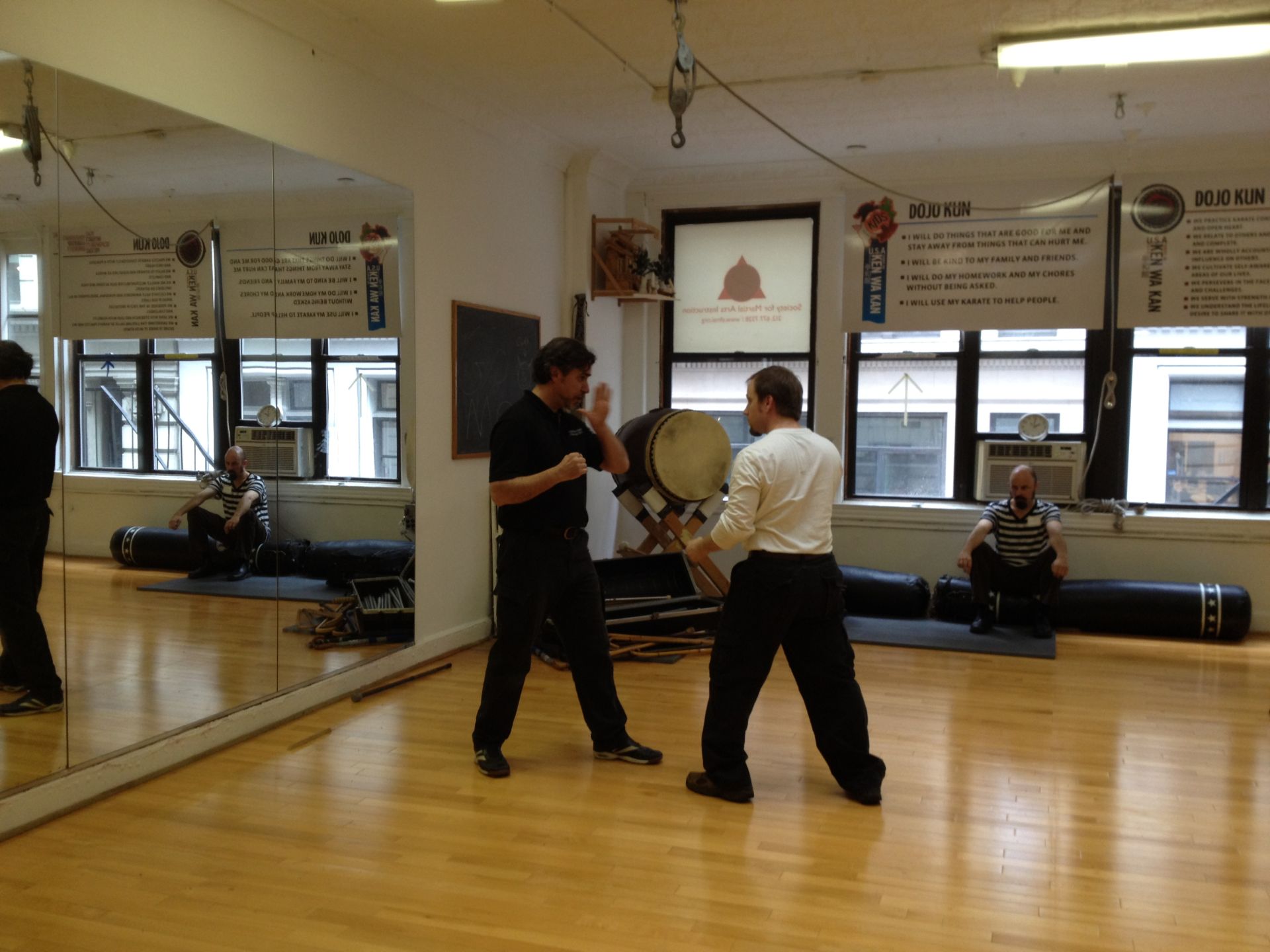 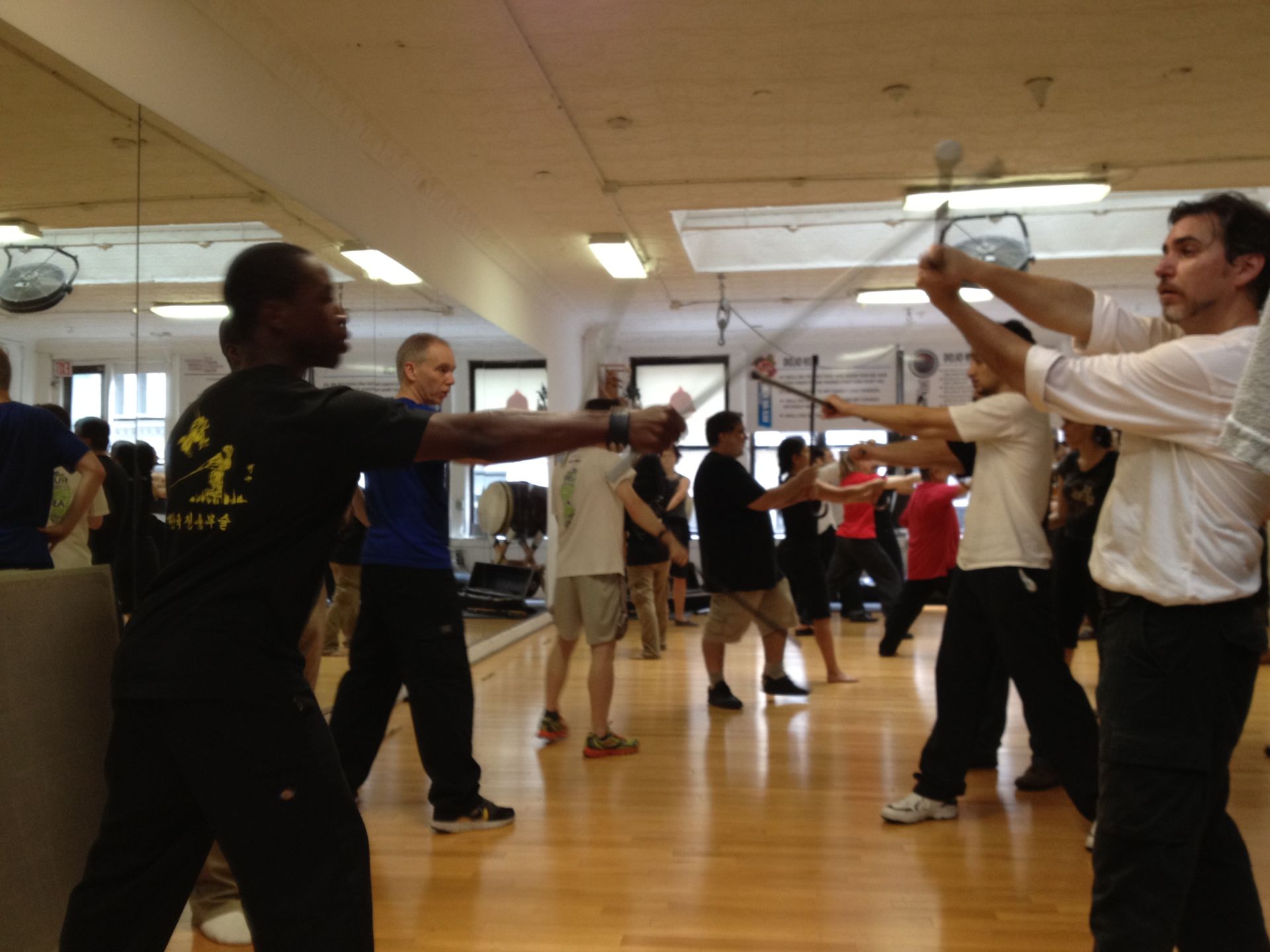 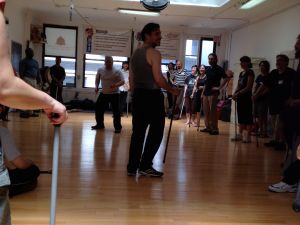 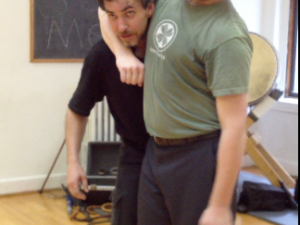 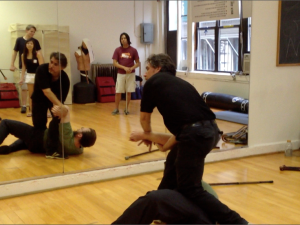 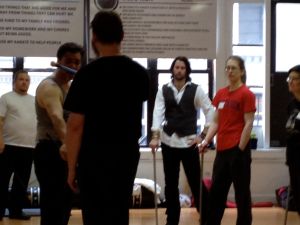 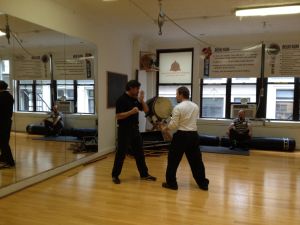 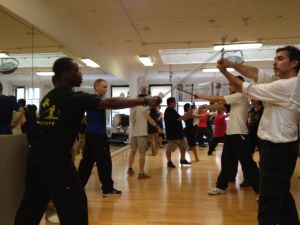 Think of bartitsu, the martial art used by Sherlock Holmes, and the first word that may pop into your mind is “discombobulate.”

It’s not too far from the truth, actually—and the recent Robert Downey Jr. movies actually did consult bartitsu expert (and duelist, swashbuckler and constant gentleman) Professor Mark P. Donnelly. But there was no discombobulating at Professor Donnelly’s annual seminars with the Bartitsu Club of New York City last weekend, although he did show how to dislocate or potentially tear off an arm.

“Instead of going there, we’re going there.” He twists his assistant’s arm as a murmur rises in the crowd. “Stage two, I’m going to put the back of his head where my left heel is. Stage three, I’m going to let go of my cane—in reality I don’t, but in this case I will, just so I don’t actually rip his arm off.” Twist, twist, wrench. “Uwarghh! I should be holding my cane and his arm here.”

How very unlike a typical gentleman.

But quite like a particular gentleman by the name of Edward Barton-Wright, who named the Victorian method of defense, one of the first martial arts that combined Eastern and Western techniques, after himself.

It’s no surprise that many of its practitioners are history fans or fans of Sherlock Holmes—the books, the movies and the BBC series. Indeed, some of the 30-some participants, who came via online forums, the New York Nineteenth Century Society, the Steampunk World Fair or other avenues, even dressed up as sirs—or ma’ams.

Recently, a handful showed up at the club in collared shirts and newsboy caps. Professor Donnelly’s assistant wore a three-piece suit with a watch fob and straw boater hat. Rebecca Sagen modeled a grey vest, long shorts and espadrilles. Rachel Klingberg, who founded the New York branch of the Bartitsu Club and is one of the regular instructors, dressed on Saturday in home-sewn black pantaloons.

Her fellow bartitsu workshop leader Jesse Barnick said that dressing up had unexpected benefits. “I will say that I do enjoy training in a waistcoat,” he mused. “I find that it really helps one keep one’s posture.”

Mr. Barnick, however, did not dress up. The majority of the participants, especially the martial arts enthusiasts, came in regular exercise clothes. And as the confines of the air-condition-less dojo became less bearable, the assistant took off his white shirt to reveal a green tee. From beneath the Victorian gentleman emerged the ordinary Joe.

This combination of Victorian-era references and modern-day application continued into the lessons.

“First principle of bartitsu is to determine the nature of the fight,” said Professor Donnelly. “Do I recognize him? If I do, I may easily know why he’s attacking. I might owe him money. I might have insulted him in a newspaper article.” There was general laughter. “Remember, I’m a Victorian gentleman. I might have said something bad about him on Facebook. Same idea. That said, I might be sleeping with his wife. If I recognize him, there’s a good chance that I might be able to talk him out of this getting ugly.”

Victorian gentlewomen could also use bartitsu. In fact, assured Ms. Klingberg, the wife of one of Mr. Barton-Wright’s instructors was highly proficient.

Another well-known female student was Edith Margaret Garrud, who learned jujitsu at the school and then trained the bodyguards of the Women’s Social and Political Union. This July, London put up a plaque in honor of the famous suffragette.

Though the time to use bartitsu as a tool for women’s rights is now over, it can still be useful for other situations, Professor Donnelly pointed out.

“When you’re in North Yorkshire and Newcastle United just lost to Manchester United, and a fight breaks out in a club, and you do this,” he said, raising his fists, “they will laugh. For about three seconds, before you knock them out.”

But does anyone carry a cane around anymore?

Mr. Barnick, for one, admitted that he did.

“I’ve started doing walks with any type of walking stick,” he said. “So I have both that tourist cane with the crooked end plus straight walking sticks and canes. I’ve actually taken to keeping one in my car.”

Did he get looks?

“Oh, when I carry a cane around, people give their seat! They think I need the cane,” laughed Lissanne Like, who teaches historical fencing. “It’s funny, I came here with the cane, and people were getting up and giving me their seat. I recommend canes for everybody.”

For others, however, the cane was impractical.

“Oh yeah, absolutely, I plan to injure my leg so that I have an excuse.” T.J. Gianni deadpanned. “No, I don’t plan to. It would be nice and exciting to carry one, but an umbrella works pretty good.”

Umbrellas are most effective as bayonets, and neo-bartitsu, a modern adaptation of the Victorian techniques, makes use of any available implement, not just a cane.

“Neo-bartitsu would use a pencil, bottle, cap,” said Professor Donnelly. “This,” he held up a bottle, “is not a great weapon. Neither is a handkerchief. But there are lots of techniques for you to use a handkerchief. Any one of you see the first Sherlock Holmes films?”

Neo-bartitsu also deviates from Mr. Barton-Wright’s version in that it is not taught only to the gentry.

“America has always considered itself as a classless society, so there isn’t ‘we’re in the wrong class to study this,’” said Professor Donnelly.

Fencing coach Tico Flores said he and fellow coach Moses Sistrunk, Jr. were there to learn bartitsu with the intention of teaching it in their inner-city fencing program.

“At some point, if we can get a little more grasp of this, we might teach this—not to kids, but maybe some of the parents,” said Mr. Flores. “Because what’s interesting about the cane is that it’s a weapon, but you can walk the streets with a cane. There’s no law against it,” adding, “The reality of it is, once you start striking, you’re not a gentleman anymore.”