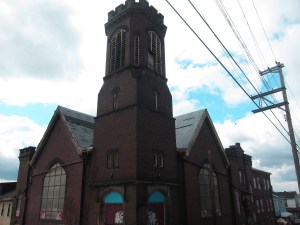 You may have seen Dustin Yellin’s show at Half Gallery in April, but come September, the artist will put aside his resin specimens and will do your hair, for the right price. Mr. Yellin is one of the many artists including Mickalene Thomas, Natalie Frank, Duke Riley, K8 Hardy and Dzine who will be offering up their services for a few hours at Pearly’s Beauty Shop on the night of September 8.

This one-night only evening of pampering and partying, which begins at 7 p.m. and goes until midnight, at SEE, an exhibition space in Long Island City, is the brainchild of artist Callie Curry (aka Swoon) who is raising funds for her “community-activated” art center that she’s building in an old church in North Braddock, Pennsylvania.

Ms. Curry—who famously invaded the 2009 Venice Biennale via hand-crafted boat—got the idea when she was doing the nails of her assistants during a break and figured it would be a fun, wacky way to raise money for her arts center, which is scheduled to open in the fall of 2013. “This event will be raising money for a new roof,” Ms. Curry’s assistant Marie Goble told Gallerist during a phone call.

As for what each of the artists will be doing, that’s still very much up in the air though some have already stated their preferences. “I’m dying to do very Weimaresque makeup jobs,” painter Natalie Frank told Gallerist over email. But she will also be doing nails. Chris Stain wants to paint peoples’ bodies, while Duke Riley will most likely be giving tattoos.

Prices will range from $5 for a flourish to $500 for a full-on service by one artist, such as a “full set of nails” by Ms. Curry or a “hair diorama” by Mr. Yellin. What is a hair diorama? “It isn’t a real thing,” said Ms. Goble who explained that artists will essentially be turning your hair into a sculpture. And it’s first-come-first-serve.

The $20 entrance fee will also get you into the party with DJs Dirtyfinger, Roofeeo, Manhate and 3 Kings International Sound and music, installations and performances by Lady Circus’ Anya Sapozhnikova, Marshall LaCount and Shenandoah Davis.

You may not be able to afford one of Ms. Thomas’s collages, but she might do a little flourish to your cheek on the fly for five bucks.