Back in June, the New York Observer published a piece by Manhattan restaurateur, blogger and soon-to-be-book-author Eddie Huang about Red Rooster chef Marcus Samuelsson, tied to the release of Samuelsson’s memoir, Yes, Chef. In it, Huang took a look at the cultural and culinary implications of Red Rooster, one of Harlem’s most critically hyped (and priciest) dining destinations.

Samuelsson did not take kindly to the piece then. And over a month and a half later, he’s still talking about it.

In an interview with the Washington Post‘s Tim Carman, Samuelsson responded with vigor to a question about Huang’s piece. Emphasis ours:

TC: This seems like an appropriate time to mention Eddie Huang’s essay for the New York Observer, which essentially argued that your perceptions of Harlem were patronizing.

MS: That’s also giving it a lot of thought. The other quick answer is that maybe he wanted to punch up.

MS: Are you kidding me? It’s a joke. You’re dealing with a guy who doesn’t want to enter a conversation. Even discussing it is a waste of time. I trust the New York Times. I trust The Washington Post. I trust the New York Herald. [1] I trust the Tribune. I trust the journalists that I’ve read and that have carefully thought about what to [say], and then render their judgment. I also trust my own work. I have zero interest to get into people who want to get famous. There’s two ways to get famous. There used to be one way: You worked really hard, and you were really good. That was the only way to get known. I still believe in that one. [2] So if I poured a beer on you and we put that on YouTube, maybe we’ll get 4 million hits. I have zero interest in that.

I can tell you my reality: I moved myself from Midtown 10 years ago. I looked at Harlem, at 22 percent unemployment [3]. I look at that block where [Red] Rooster is today, where there’s zero unemployment. I look at the 110 employees that I have, where 80 of them come from Harlem. I’m not here to defend garbage; I trust my work. It takes an incredible amount of effort, an incredible amount of skill to do that. To even answer garbage, why should I lower myself to that level? I, as a mentor, as a mentee, as an employee, as a chef, I have a responsibility, and it’s not to go bottom fishing and enter garbage. [4] It is to rise above and be the person that I set out to [be]. So I hold myself to that standard. Garbage will come.

Criticism is part of the creative man’s journey, and I appreciate it. [5] Garbage is not part [of it]. I see the game. The game is about punching up today. The game is about ‘Here’s somebody that does something great. Well, rather than applaud it, I can now punch up and be part of that conversation.’ [6] What’s fascinating today is that … before, there was not an outlet for that garbage, and today, real platforms are actually writing about that. [7] That’s what’s fascinating to me; the real platforms are lowering their guard.

[2] Eddie Huang’s writing has certainly made him some type of name, but his cooking isn’t bad either. It’s been praised by the New York Times (twice), New York magazine, the Village Voice and plenty of others.

[4] Maybe this is a matter of semantics, but if Samuelsson didn’t want to “go bottom fishing,” he wouldn’t continue to discuss Huang’s piece—as he does here, as he’s done previously—more than Huang ever did.

[5] Eddie Huang’s response to a bad review of his Lower East Side restaurant, Xiao Ye, was to admit that he had done something incorrectly. In response to open criticism of his piece about Samuelsson, Huang was receptive and open to conversation. Marcus Samuelsson’s previous response to bad reviews and failure was to abandon ship.

[6] Samuelsson keeps referring to Huang’s “punching up.” Huang’s memoir is going to be published by Random House in February 2013. Samuelsson’s memoir was published by—of course—Random House as well. If anything, it’d seem at least in one regard (though maybe more) Huang is punching laterally. Also, Huang and Samuelsson both worked on The Great GoogaMooga together (as you can see above).

[7] Other “real platforms” that are “lowering their guard” by covering Huang that we haven’t already mentioned: Time, Esquire, Salon and The Wall Street Journal, to name a few.

Huang has taken to Twitter to comment on the interview, not on Samuelsson’s response, but on Washington Post interviewer Tim Carman’s questions (and how Carman, in Huang’s eyes, let Samuelsson off the hook by dismissing criticism as punching up). Huang has a point: Carman could have known with very little research that, if anything, Huang was (as we have just pointed out) punching laterally. Then again, it seems as if Carman may have had his mind made up about Samuelsson going into the piece.

Some choice descriptors of Marcus Samuelsson (from Carman, the interviewer):

Of course, Eddie Huang wrote the piece for the Observer, and while not everyone at this paper will agree with what Huang had to say, most of us would argue his right to say it (on the sure footing of the aforementioned facts alone). 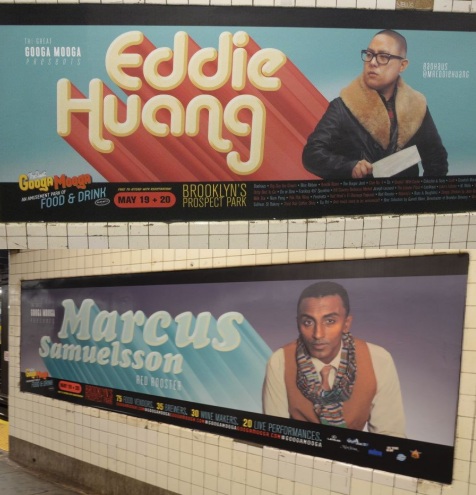