Last Saturday afternoon, at Dia: Beacon, the art critic Christoph Cox, casual in a grey shirt and jeans, was leading a group through a gallery of hulking metal sculptures by John Chamberlain. It was a dramatic scene, but these people had assembled to hear Mr. Cox discuss something far subtler. “It’s the most overlooked work in the entire museum,” he told them. “It’s invisible, so it’s very easy to miss.”

Time Piece Beacon, a 2006 sound installation by the artist Max Neuhaus, uses hidden speakers, as Dia puts it, to envelop the museum in a “zone of sound” for roughly seven minutes, every hour on the hour.

“Striking bells have a sharp attack,” Mr. Cox said, explaining the piece. “They’re big and metallic, and they have a slow decay,” meaning they resonate. Time Piece Beacon, he said, is the inverse of this. It gradually builds, and then suddenly stops. “It’s dramatic. Though, it’s a subtle drama.”

Neuhaus, who died three years ago, used computers to create his sound pieces, but he started out as a traditional musician, a percussionist. He grew up in Westchester and, while still in his teens, performed with John Cage. When the German composer Karl-heinz Stockhausen heard Neuhaus’s performance of Zyklus, his famously complicated piece for solo percussion, he invited him to join his first American tour, in 1963. The following year, Neuhaus made his solo debut at Carnegie Hall and, four years later, released the album Electronics and Percussion: Five Realizations. Its cover features a bare-chested Neuhaus surrounded by gongs, rack-toms and amplifiers. (“It’s really quite a sight,” noted Mr. Cox.) Afterward, he quit performing and turned to sound environments, which he considered more akin to sculpture and painting than to music.

Fourteen of them are installed at sites around the world. Dia owns two, Time Piece Beacon and Times Square, which is located on a pedestrian island on Broadway between 45th and 46th Streets and sounds like a distant, rhythmic drilling. Initially installed in 1977, it was removed in 1992, and then re-installed 10 years later. Neuhaus intentionally left it unmarked—as with other pieces, including Time Piece Beacon, he wanted people to discover it on their own.

At Dia: Beacon, the group made its way outdoors to a sunny patio overlooking a garden. Here, Mr. Cox said, we would have a better chance of hearing the piece.

“You can mistake it for an air conditioner or an airplane,” he warned. Phones and watches were checked—only a few minutes to go.

There was a gentle thrum of crickets, then a clanking noise from inside the museum. In the distance, a train’s whistle blew. Was any or all of it part of the piece? “It draws ambient sound into it, like John Cage’s 4’33”,” Mr. Cox said. “I compare this to dub-reggae. Producers like King Tubby, they cut out the guitar piece and leave these cavernous spaces—” He cut himself off. “I should shut up, so you’ll start to hear it.”

The train whistle blew again, and then there was a low drone that started out almost imperceptibly but, as it reached a crescendo, turned into a hum that seemed to emanate from the museum’s windows and the tops of trees. But then came the whistle yet again, louder this time, as the train approached the nearby Beacon station, and the hum was drowned out. Then it was over. Undeterred by the interruption, members of the group avidly began to compare their experiences.

“Its pitch was in harmony with the train whistle,” said a man in a blue shirt and khaki shorts.

“At first,” said a woman, “I heard the sound of crickets and thought that was it. But then I heard the work, and realized those were just crickets.” 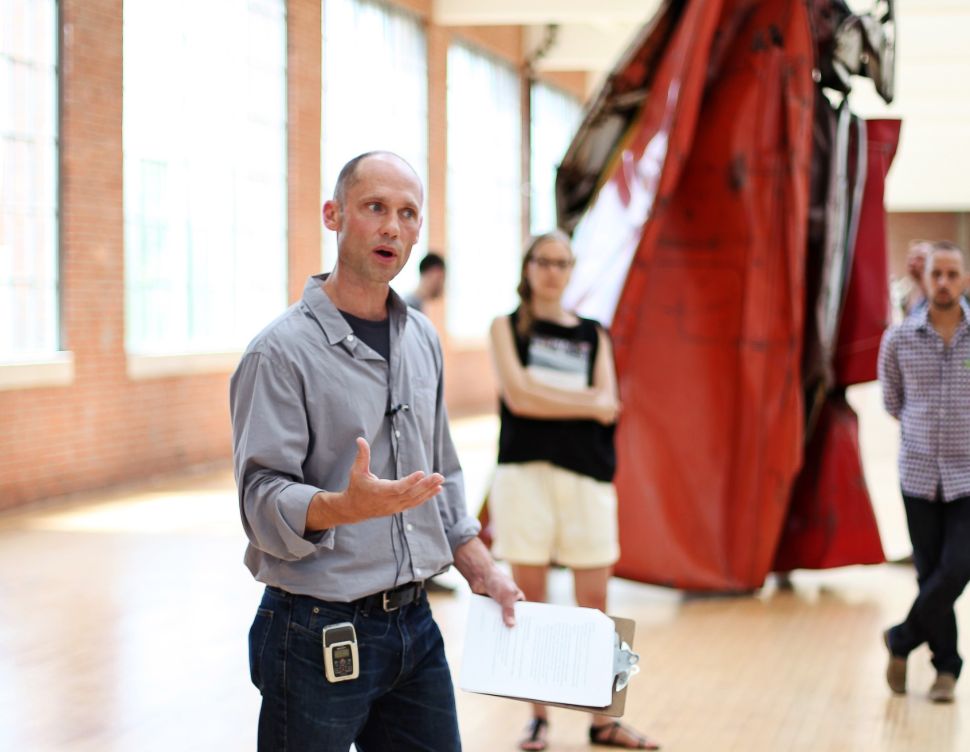