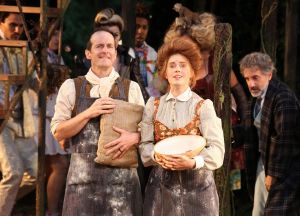 Denis O’Hare and Amy Adams (center) and the cast of the Shakespeare in the Park production of Into the Woods, directed by Timothy Sheader with co-direction by Liam Steel, running as part of The Public Theater’s 50th Anniversary season at The Delacorte, July 24 – September 1. Photo Credit: Joan Marcus.