Kyrillos previously voted against the legislation sponsored by Greenstein and later vetoed by Governor Chris Christie.

“If Senator Kyrillos has truly seen the light and now understands that the wealthy must carry their fair share of the tax burden, then I want to be the first to say, ‘Put your legislative action where your mouth is,’” said Greenstein. “For too long, New Jersey’s middle class has been footing the bill for government programs, services and paying down our deficit, while the wealthiest among us received tax breaks. Until now, Joe Kyrillos has accepted this status quo, but now he agrees that is not acceptable to New Jersey’s middle class.”

Delighted by Mitt Romney’s selection of Paul Ryan as his running mate, Democrats are trying to put Kyrillos in a rundown with the VP choice, a starve-the-beast government proponent.

“I want to provide Senator Kyrillos with a great opportunity to prove that his break from one of the most definitive parts of the Ryan budget is NOT just a snow-job to curry voters’ favor,” said Greenstein. “I invite him to add his name to the legislation and demonstrate his sincere commitment to ‘smart’ tax increases on wealthier residents for the sake of a more fair and equitable distribution of the New Jersey tax burden.”

Distancing himself from Ryan with his statement to the Bergen Record Wednesday about taxes, Kyrillos tomorrow intends to release three years’ worth of tax returns in an effort to smother other comparisons to the national ticket.

Romney to date has released only his 2010 returns and an estimate for 2011 as Democrats continue to hound the certain Republican nominee about releasing more. 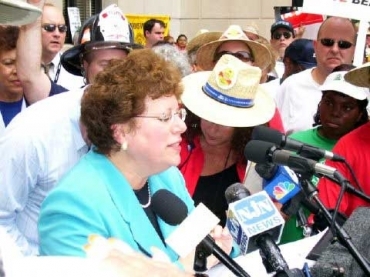