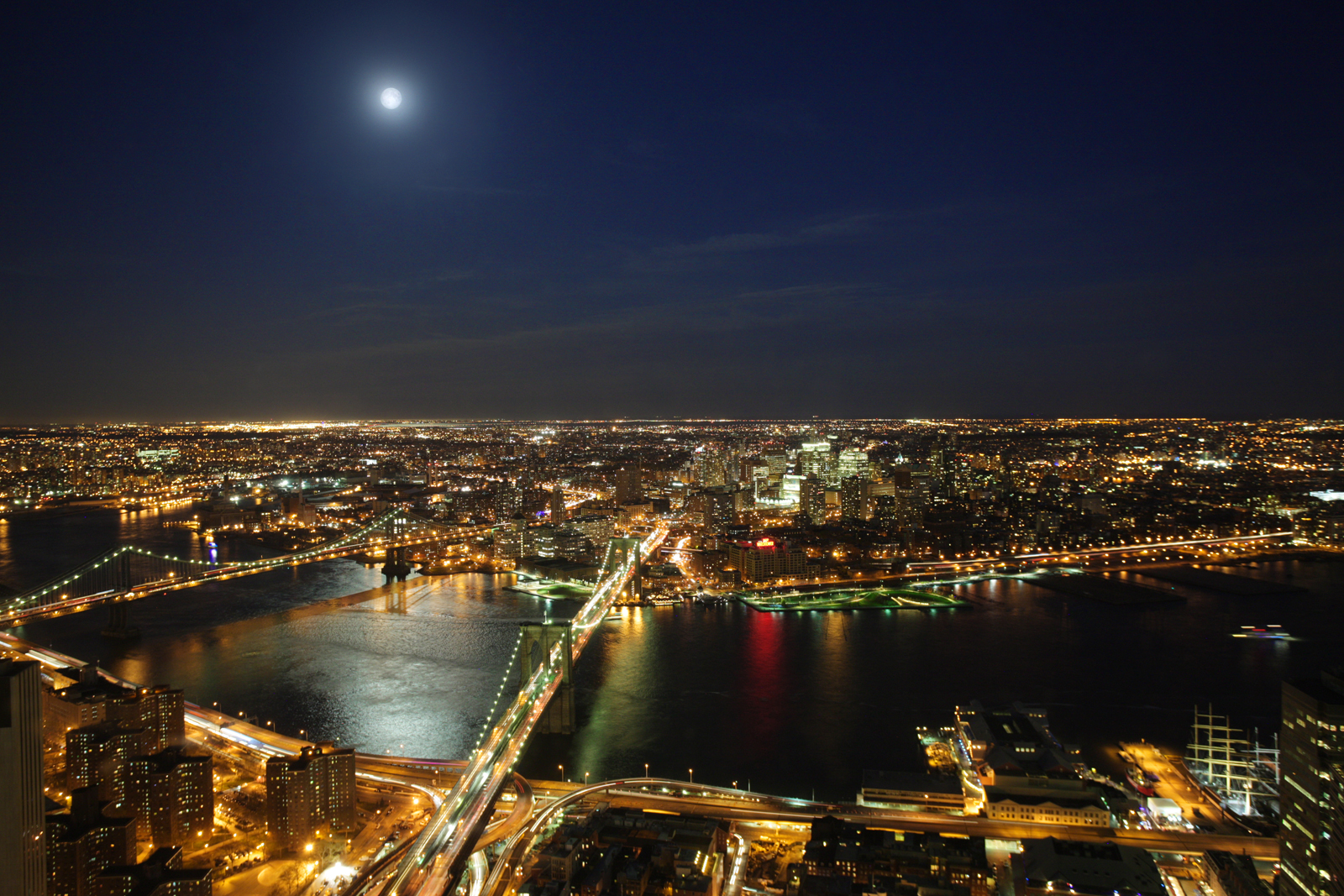 A night view of the many bridges leading to Brooklyn. (Citi Habitats)
kvelseyobserver 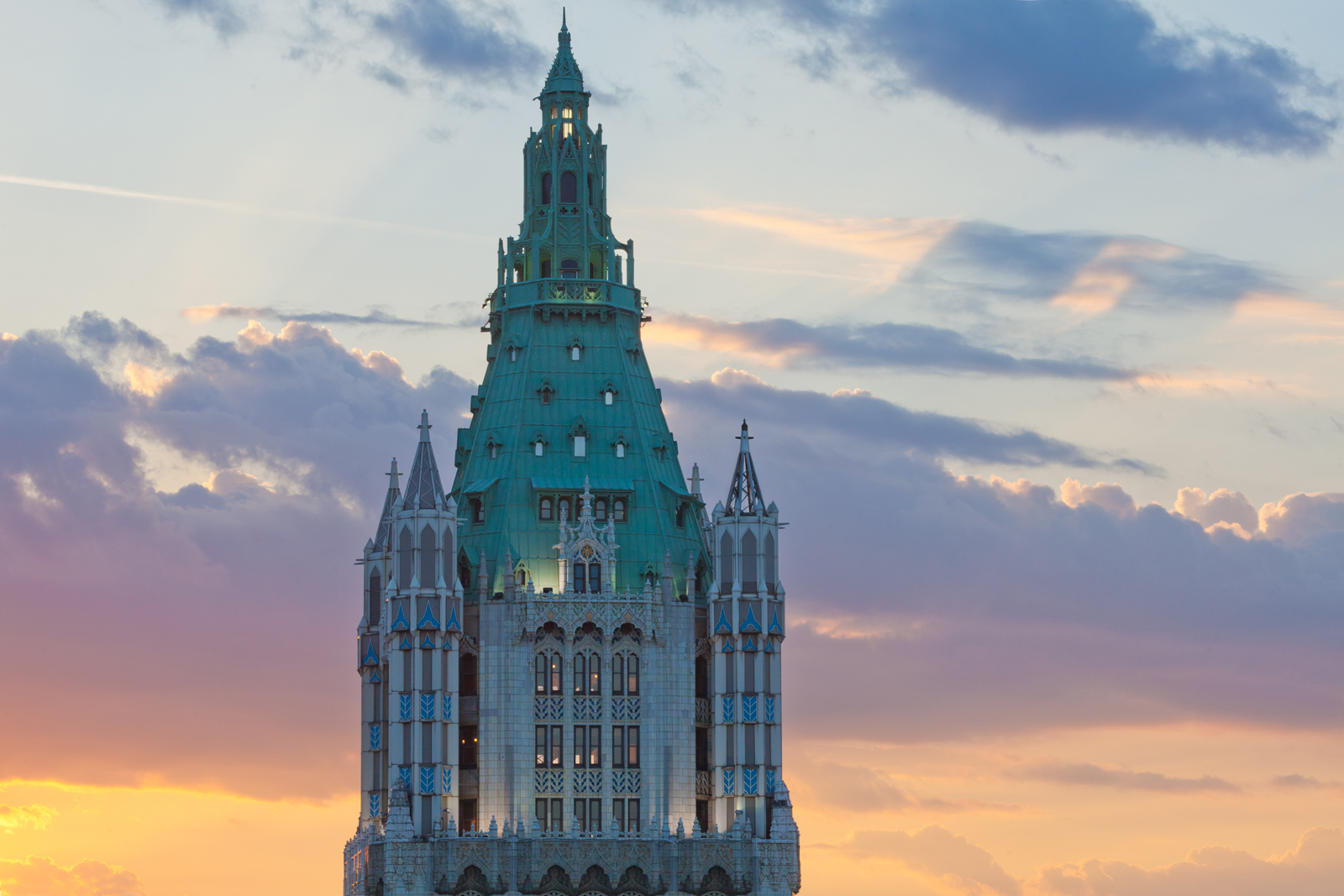 What the Woolworth building looks like when it isn't looming over you. (Citi Habitats)
kvelseyobserver

Looking North, from the $60,000 a month penthouse.
kvelseyobserver
Advertisement 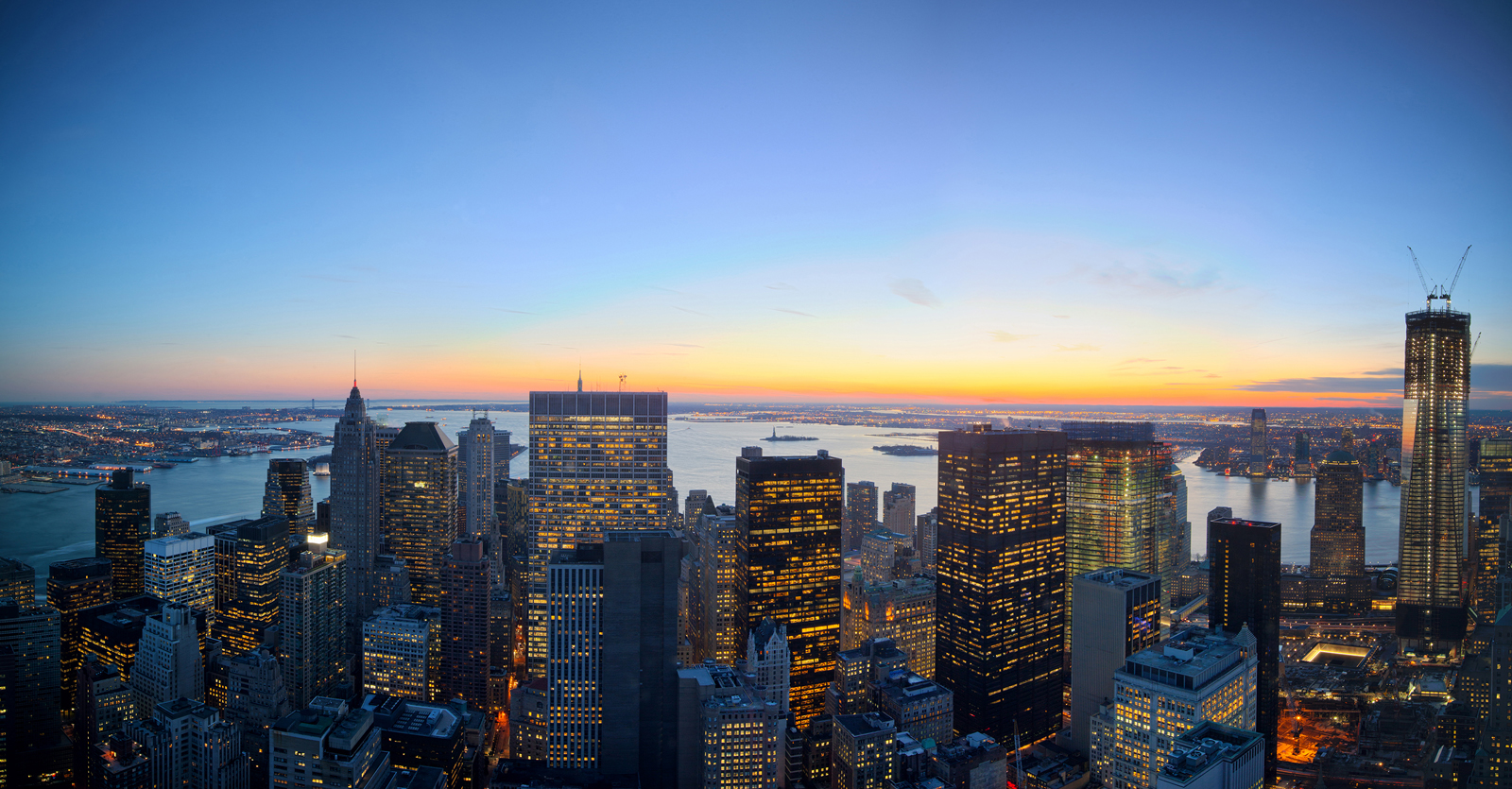 A nice thing to gaze out at as you brush your teeth. (Citi Habitats)
kvelseyobserver 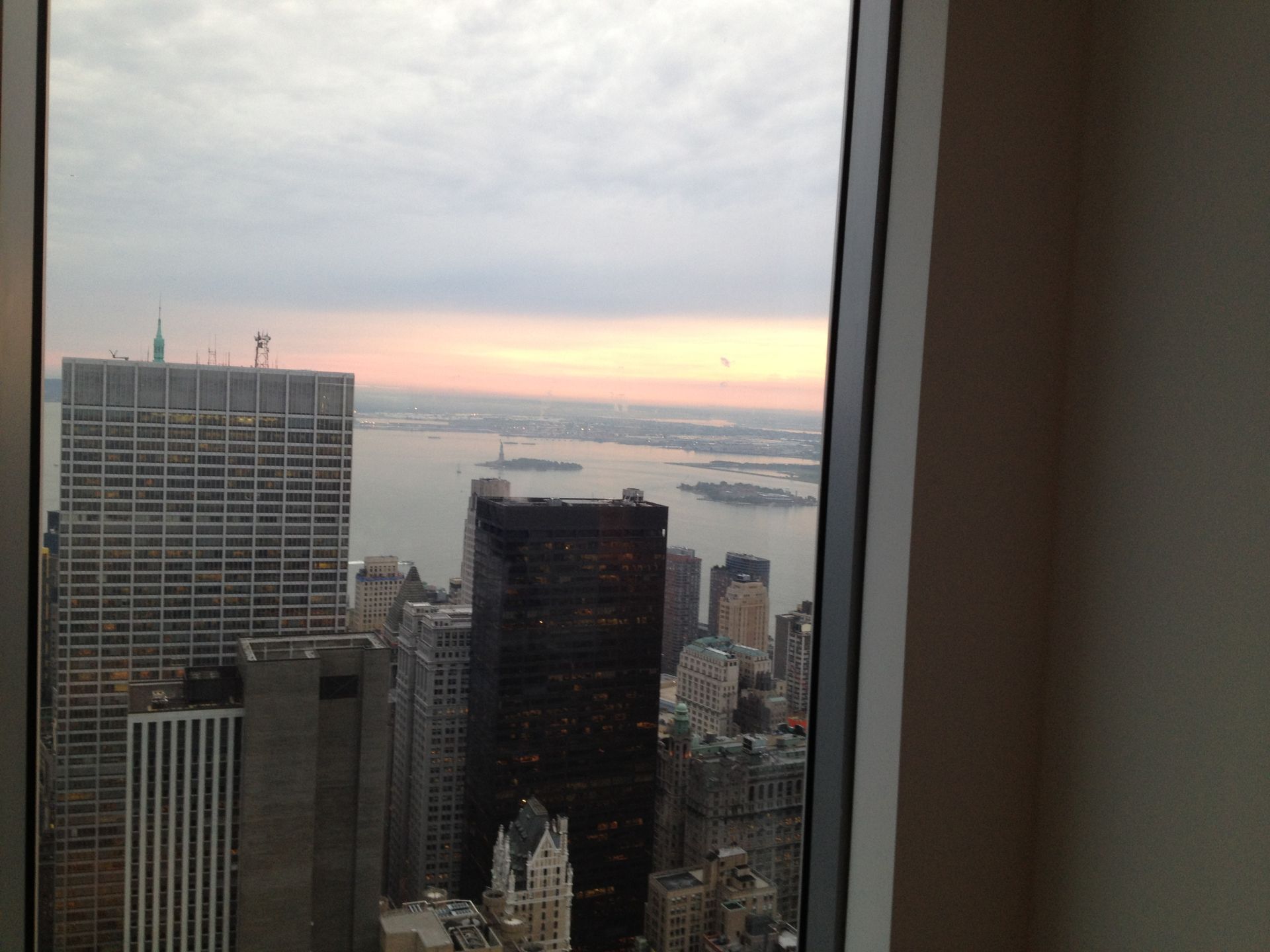 The views, not the location or the layout, is what brokers are banking on. (Kim Velsey)
kvelseyobserver 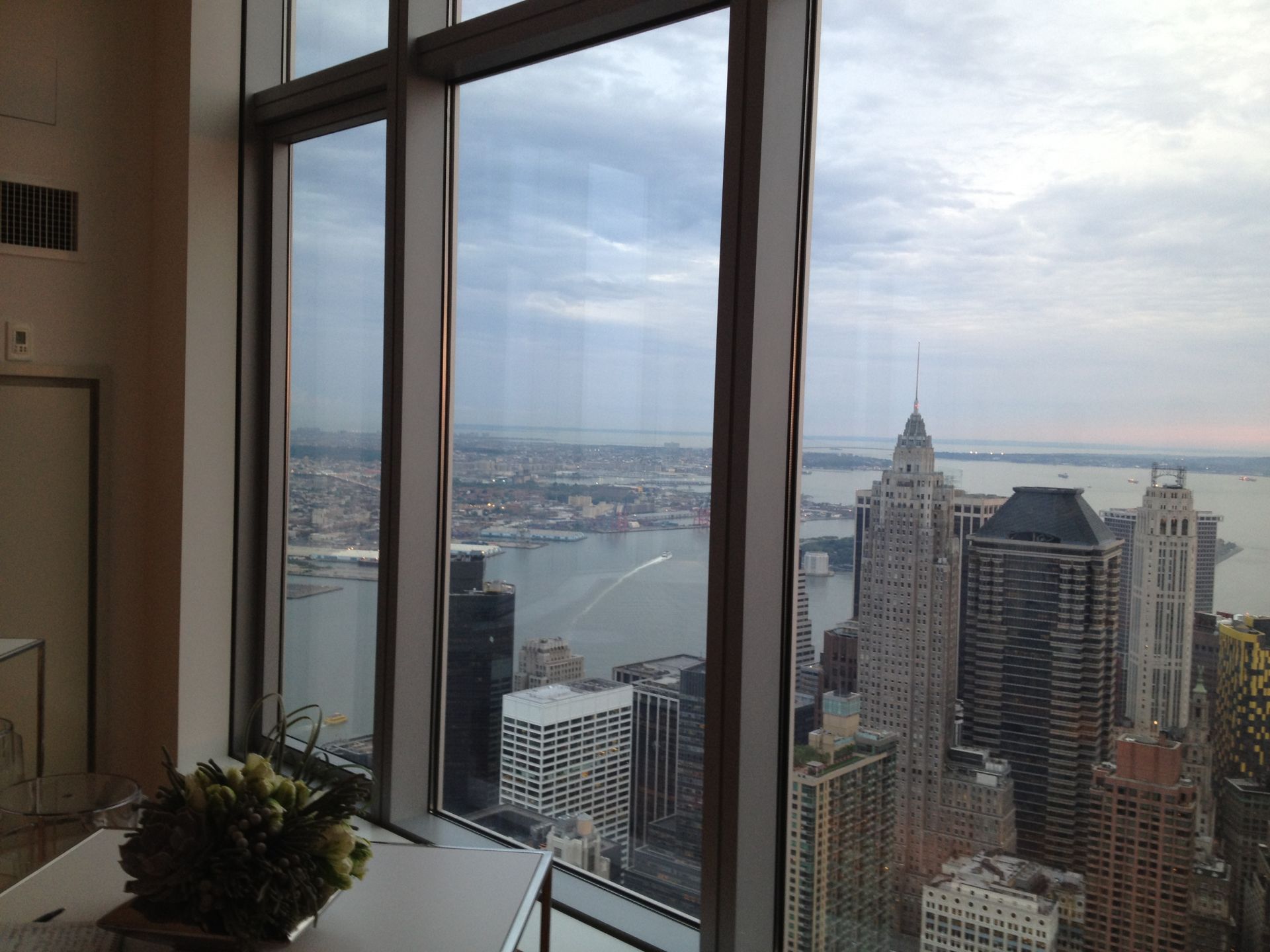 The view from the living room of one of the $45,000 a month penthouses. (Kim Velsey)
kvelseyobserver
Advertisement 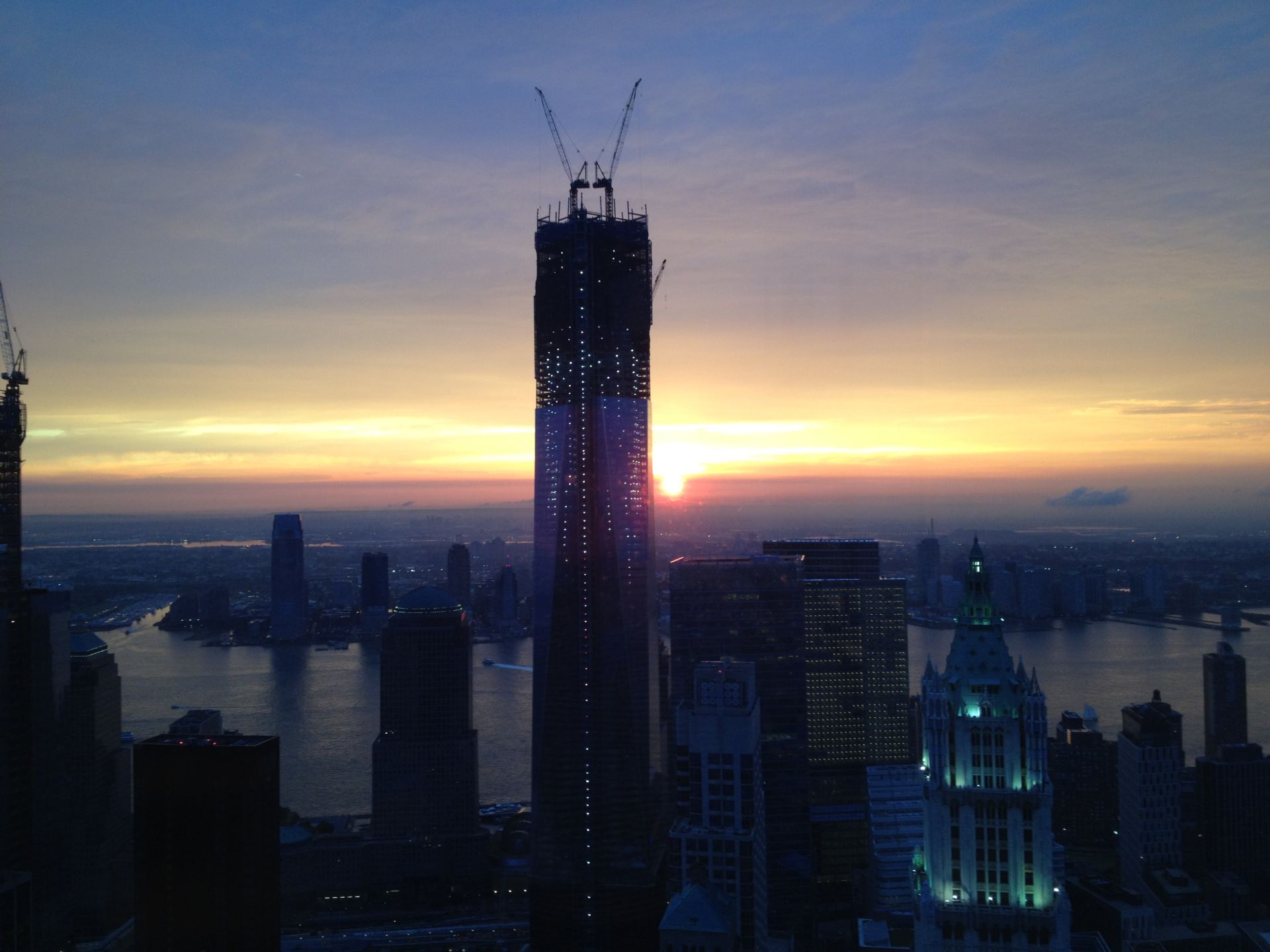 Who really cares about the finishes or the heated floors when you can see this? (Kim Velsey)
kvelseyobserver 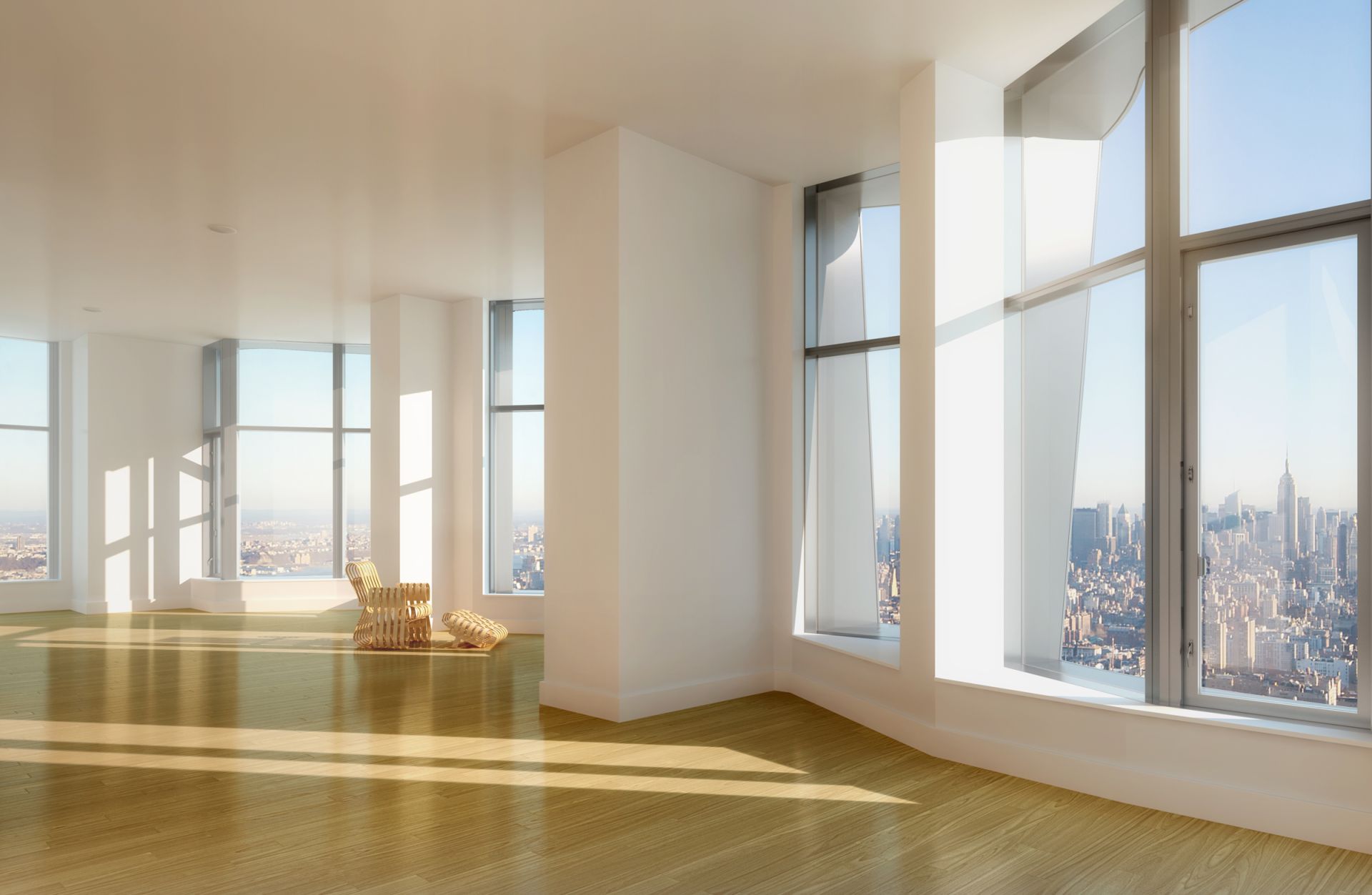 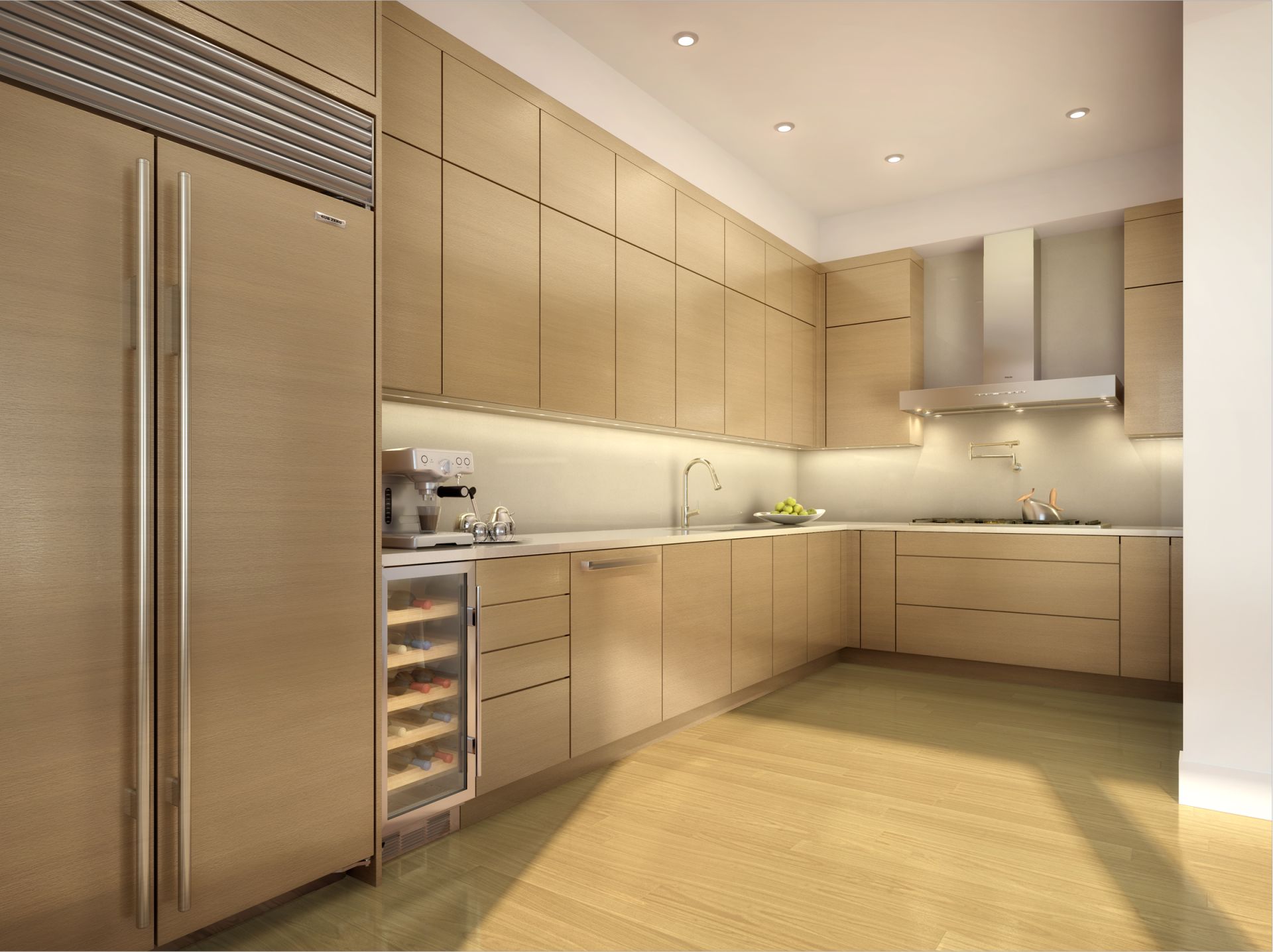 Expensive finishes, appliances, etc., although The Times was not impressed.
kvelseyobserver
Advertisement 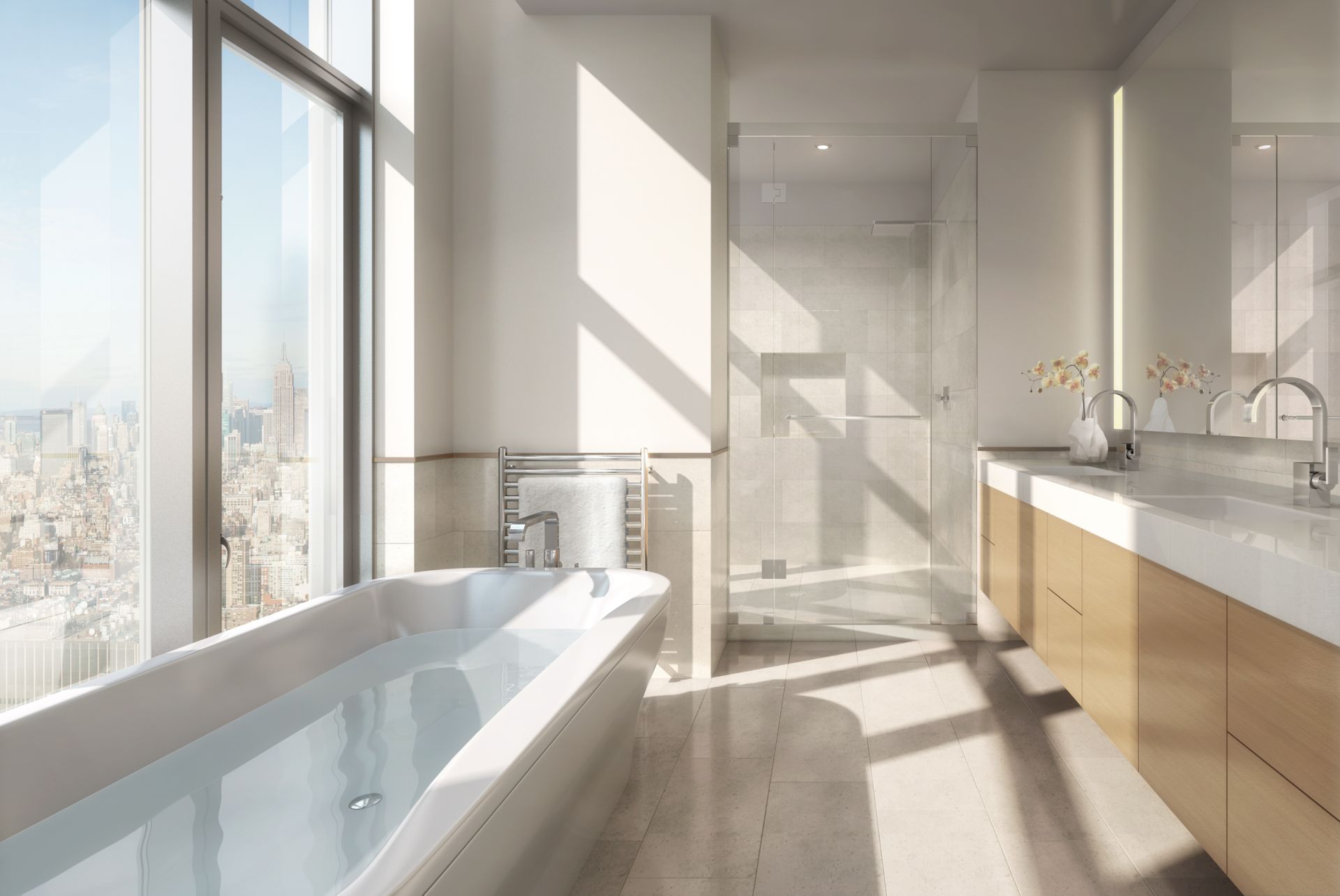 The lowliest of rooms taken to the greatest of heights.
kvelseyobserver 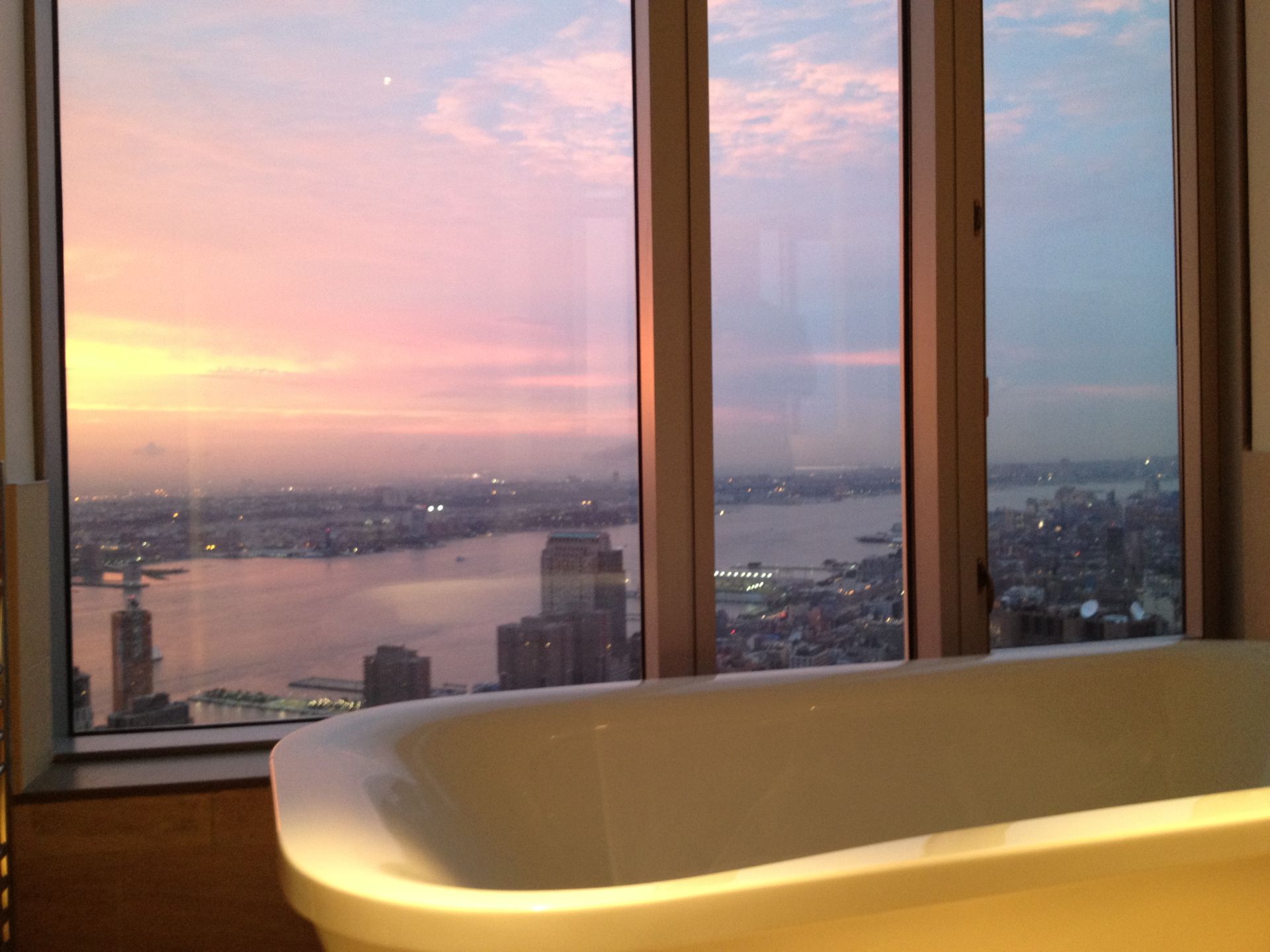 Rub-a-dub. There's no one else way up here to see you naked.
kvelseyobserver 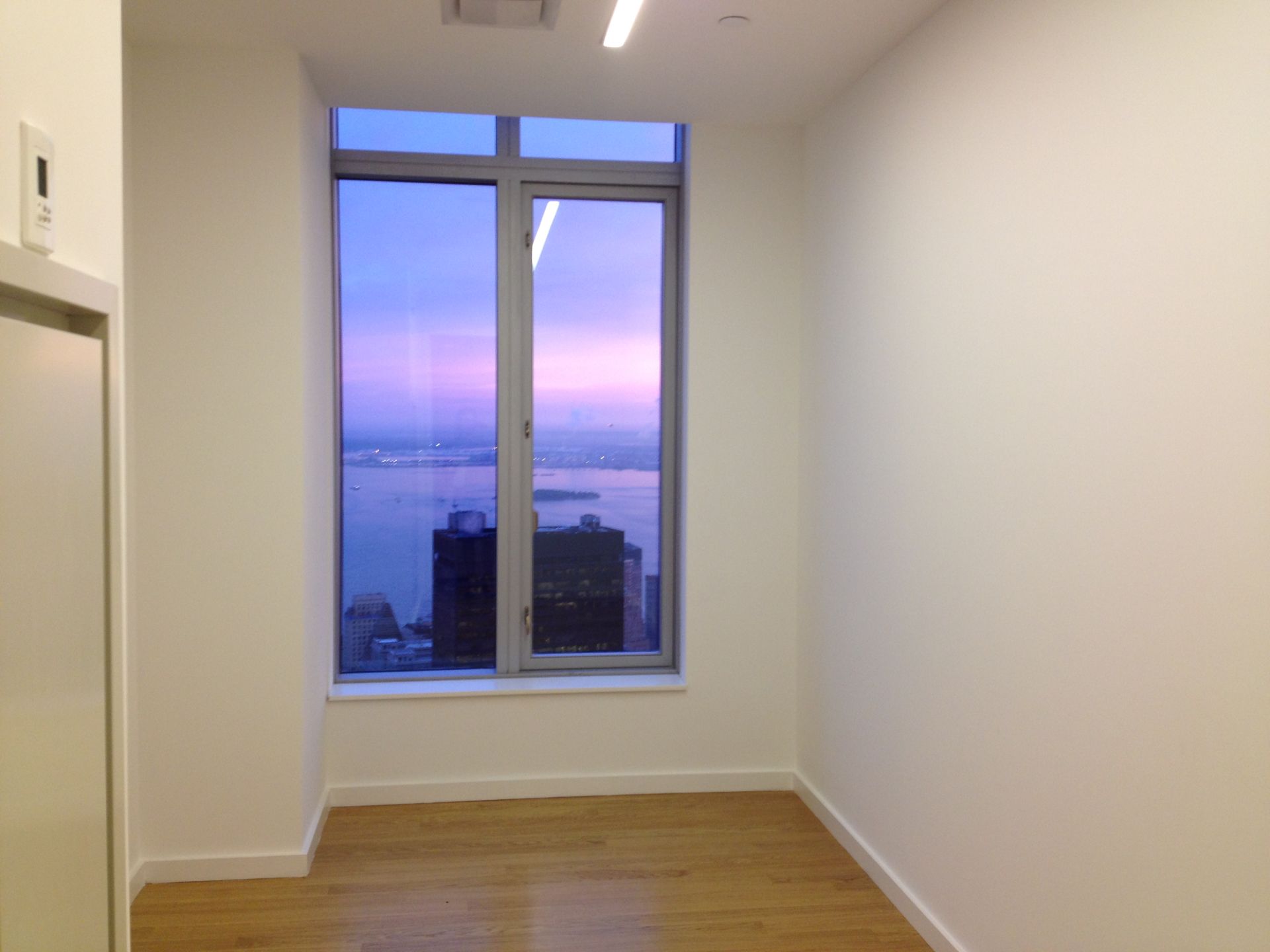 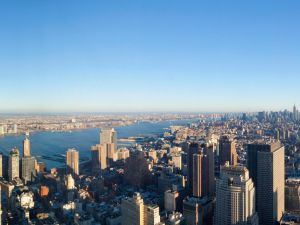 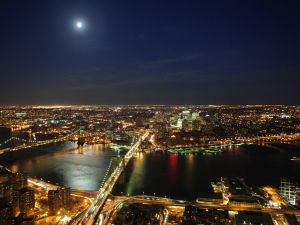 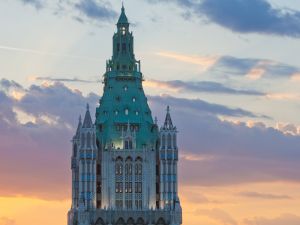 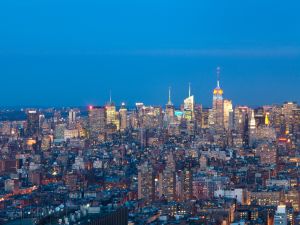 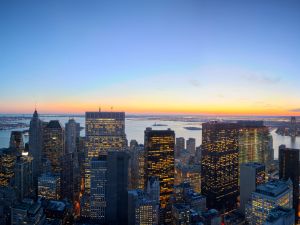 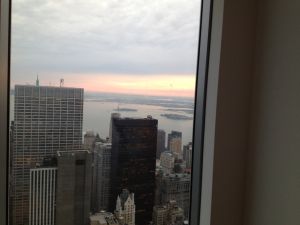 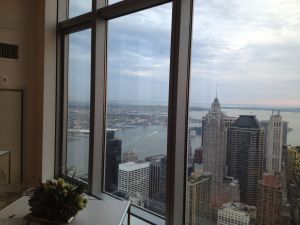 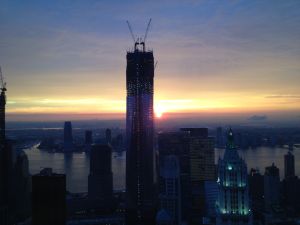 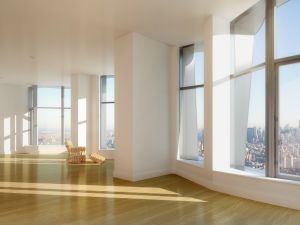 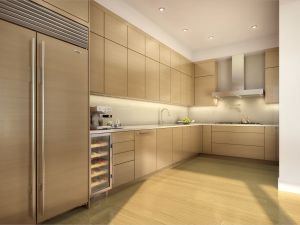 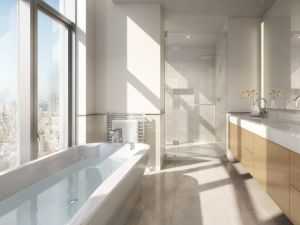 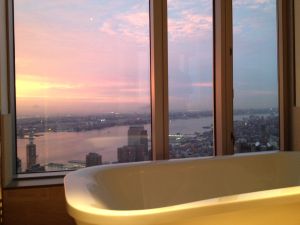 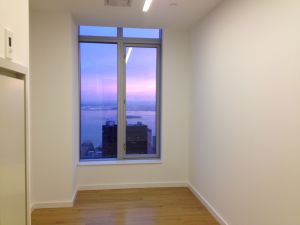 Inside the penthouses of 8 Spruce Street, the fact that the building was designed by Frank Gehry seems incidental. At 850-feet-high, the weirdly angled windows and sleek finishes blend into the exquisite (and exquisitely dull) good taste of thousands of other high-end apartments around the city. It is the view that dominates.

A set of rooms, in the end, can only have so many permutations, but the view from a tower that rises 76 stories above lower Manhattan—its developers say that it is the tallest residential tower in the Western Hemisphere—is unique, the trump card that New York by Gehry is counting on to collect $60,000 a month for the largest penthouse and $45,000 a month for the two smaller ones.

“For this type of renter, it’s kind of understood that it has to have a good layout. But layouts are subjective,” said Clifford Finn, the president of New Development Marketing at Citi Habitats, the agent for the building. “There’s no question that anyone would walk in here and not like these views.”

Indeed, we found the view mesmerizing as we drifted distractedly through a crowd of Citi Habitat’s high-end brokers and company bigwigs during a launch party for the three penthouses on Wednesday evening. Gazing at the immaculate and empty rooms, The Observer noted that a party for a penthouse is a very different affair than a penthouse party.

Signs on the windowsills asked us to please not to leave our drinks (white wine or a dark green slurry that was the event’s signature cocktail) there and discreet plaques in the bathroom informed us which were for show and which could be used (the toilet paper or lack thereof was an even more discreet indication). Not that we witnessed anyone who dared to feel free enough use the bathrooms. We wondered if we should be worried about our shoes scuffing the floors. Then again, we reasoned, “it’s a rental.”

“The people who will rent these homes can purchase. They chose not to,” said Mr. Finn, describing the kind of person who would be willing to pay handsomely for the privilege of living in something lovely that he or she could never own.

New York by Gehry, despite its somewhat grungy location on a tiny piece of land in Lower Manhattan (Tribeca may be close, but it is not in Tribeca), will be a test not only for if people will agree to rent at such high prices (condo rentals at the Time Warner center and 15 Central Park West prove that a pool of high-end renters does exist), but also whether a building can bully them into doing so. Until One57 is finished, there are no similarly lofty perches in the city, and none so far downtown, where so many belonging to the monied classes like to live these days. Whether, in other words, people will rent who would rather buy because there’s nothing quite like the view from the tippy top of New York by Gehry.

Not that the apartments aren’t decked out with all the requisite comforts—the $60,000-a-month penthouse has four bedrooms and a separate studio for guests, or more likely, staff. Blinds are remote controlled, along with everything else: lighting, sound, temperature. The living room spans nearly 70 feet. The other apartments have three bedrooms each and similarly heartbreaking views. Kitchens come with grey oak touch-to-open custom cabinetry. Deep bathtubs and spacious showers are situated in front of enormous windows looking out at the city below. Modesty is not an issue, we were told—no one else is high enough to see you. Although other rooms in the penthouses, jutting out at odd angles, afford astounding views not only of the city, but also of each other.

The only real shortcoming we noticed were the 10-foot ceilings, which though perfectly high, looked strangely low, floating down from the edges of the room where the tops of the soaring windows disappeared into lofty voids. As one party attendee noted, it created what was almost “a dropped ceiling effect.”

We continued to roam the rooms as the sun set, listening to the American standards played by pianists stationed in the living rooms, weaving by waiters carrying trays of miniature truffled grilled cheese sandwiches, teensy cheesburgers, amuse-bouches of fried chicken with barbie-doll sized rum and cokes (with straws) and bite-sized servings of pheasant under bell jars.

We took pictures—the Statue of Liberty, smoke billowing up behind her and fading into the blue purple haze of sunset, the sailboats drifting around Lower Manhattan, the pink-orange sun dipping down behind the unfinished World Trade Center. The brokers took pictures too, juggling their iphones and cameras with the drinks that they carefully avoided placing on the windowsills. We even caught a few, cameras dangling limply from their wrists as they stood in quiet bedrooms, starting contemplatively out the window. And then we caught ourselves starting contemplatively out the window. It was an evening of secret sighs. When the clock struck eight, the appetizers and drinks disappeared, the piano players stopped abruptly, and the brokers clustered into a bedroom for a quick team meeting. We got into an elevator and began the long ride down, stopping intermittently for passengers from the lower floors. Nonetheless, the speed of the ride was still fast enough to make us feel, for the briefest of moments, slightly queasy, as we plummeted back to earth.