The Capricorn’s raised anchor smashed into the Blackthorn and capsized her, a disaster that still haunts the locals who have to pass over the Skyway Bridge in the vicinity of the 1980 catastrophe.

Hours before Gov. Chris Christie is scheduled to deliver the keynote address to the Republican National Convention, his rivals say the Blackthorn is Christie, chained to a presidential candidate with a likeability problem and National Republican Party so out of sync with New Jersey that it will help sink the feisty governor in his home state.

Christie keynotes a party running a U.S. Senate candidate in Missouri who burbled about “legitimate rape,” a prez candidate catering to birthers, two ex-presidents (a father and son) relegated to the bench, and a duct taped Tea Party VP candidate from 2008.

“He embraces the Republican platform,” state Sen. Barbara Buono (D-18), who’s mulling a 2013 challenge of Christie, said of her GOP rival. “The fact that he’s the keynoter underscores his status as the titular leader of a radical right Republican Party.”

“Governor Christie’s hypocrisy is absolutely staggering, given his call for marriage equality to be put on the ballot,” said the assemblyman. “His remarks are a slap in the face of same-sex families across New Jersey, who want nothing more than to be treated equally under the law. Chris Christie has already shown he lacks the courage to lead on the issue of marriage equality, where doing the right thing would put him at odds with his national political ambitions. Now, he’s confirmed he’s not just willing to punt on one of the major civil rights issues of our day, but he’s willing to cynically treat thousands of New Jersey’s same-sex families as a political football when it’s convenient for his own career.”

Republicans are convinced Christie is unique, a charismatic personality with his own GOP brand bigger than the perceived narrow views of the party he keynotes tonight – a politician deft enough to hit punchlines that grab rightwing funny bones but essentially a pragmatist.

“I think the fact that he’s speaking helps New Jersey,” said state Sen. Kip Bateman (R-16). “Look at how excited the California delegation was when it heard him.”

“I think it’s his ability to speak and communicate a message,” Bateman said. “He’s sought after everywhere in the country because he is able to get his message across to the voters. We don’t have that in Washington right now.”

Regardless of the Republican Party’s national divergences from New Jersey, Christie transcends the right wing of the GOP, he said.

“He’s a strong leader at the end of the day,” said Murray. “If he runs for re-election, Democrats will say he doesn’t care about New Jersey because of the work he has done for the national GOP. But he has been a party unto himself. He’s a star because he appeals to the conservative wing of the Republican Party without embracing the right wing. It’s really remarkable. It’s a testament to his leadership skills.

“When it comes to November 2013, New Jersey voters will care about jobs and the economy, they won’t care that he gave the keynote at the Republican National Convention,” Murray added. “Nationally he is branded as a conservative, but in New Jersey he’s not because he avoided bringing social issues into his agenda.”

But Christie’s record on jobs and the economy does not bode well, at least to date, said Assemblyman John Wisniewski, (D-19), chairman of the state Democratic Committee, and another possible 2013 candidate for governor.

“It’s all about words and not about facts,” he said, criticizing the governor for touting the slogan “the Jersey comeback” across the state during his town hall meetings while the state’s unemployment rate has edged up. “At this point it’s pretty clear that Gov. Christie’s tenure does not look like a comeback. While last week the governor complained he’s tired of the press writing negative stories about 9.8 percent unemployment, New Jersey faces some real facts and this governor would prefer not to tell the truth.”

“I expect the Governor’s keynote address to be vintage Christie – long on snappy sound bites, slogans and finger-pointing,” said Greenwald. “But, as usual, Governor Christie won’t talk much about the reality behind his rhetoric.  After all, why would he talk about New Jersey’s dismal 9.8 percent unemployment rate or the 20 percent increase in net property taxes on his watch, when he can gloss over it with a snappy ‘Jersey Comeback’ slogan? The truth of the matter is, Chris Christie’s slogans have not created one job in New Jersey nor lowered middle-class property tax bills by one penny.  After the bright lights of the convention hall have dimmed, the cameras have been put away, and the adoring cheerleaders have left, Chris Christie will still owe the people of New Jersey an explanation for his millionaires-first, trickle-down economics.”

If Christie is too politically skillful to withstand Ayn Rand branding, the question becomes whether any single Democrat on a statewide platform will be able to credibly communicate Wisniewski’s, Greenwald’s and Buono’s critique of the Republican if the N.J. economy doesn’t improve. 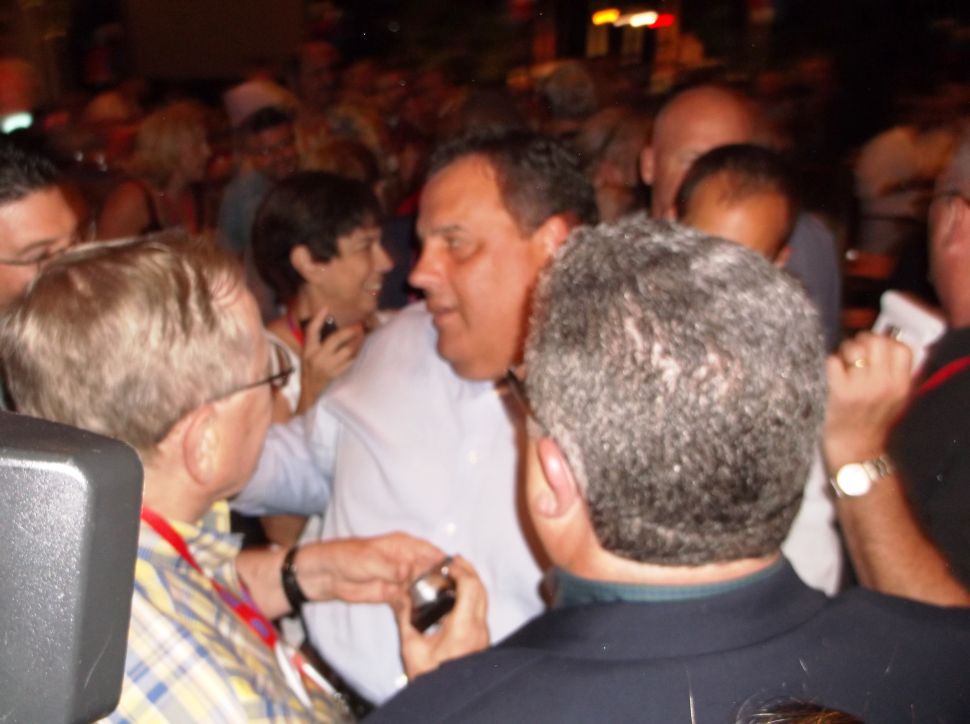