A video has hit the Internet today detailing perhaps the douchiest interaction between a Ferrari owner and an NYPD officer’s foot to ever happen outside the Mercer Hotel.

The owner of the $257,000 red Ferrari 458, Julien Chabbott, accused of the foot smashing, could very well be the same man who co-founded the fittingly named “Line Snob” smartphone app (which aims to “tackle” waiting in lines—or crush it with a coupe tire).

In the video, filmed by bystander Damian Mory, Police Officer Felix Recio is filling out a ticket for Mr. Chabbott’s car for parking in a no standing zone, for not having a registration sticker, and for not having an inspection sticker, according to an NYPD spokesman and the criminal complaint.

Officer Recio told Mr. Chabbott “I’m writing you a summons. Please stand on the sidewalk,” according to the criminal complaint.

Mr. Chabbott, 28, of Midtown South, first tried to snatch the summons out of Officer Recio’s hands, then walked inside 147 Mercer Street, the address for The Mercer Hotel, the criminal complaint adds.

Mr. Chabbott, who was reportedly there with girlfriend (and former “The Hills” player) Stephanie Pratt, then returned to the car to announce “I’m leaving.”

Mr. Chabbott was “specifically told by the officer to not get into the car and to not leave, and that’s exactly what he did,” the NYPD spokesman added.

As for Officer Recio: “He has an injury to his left foot and right hand, he was treated and released, and is out on an injury, out of the line of duty,” the NYPD spokesman added.

He pleaded not guilty to charges in Manhattan Criminal Court this morning.

If confirmed, Mr. Chabbott is the same man behind Line Snob, which is “a location-based social network that monitors lines and provides wait times,” it says on its website.

In a 2010 Entrepreneur.com article, Mr. Chabbott said he and business partner Eric Adler created the app as “it was the perfect time to use the power of crowds.”

As the opening sentence in the article points out, “Eric Adler and Julien Chabbott hate waiting in lines.”

He also hates waiting for a police officer to finish filling out a summons, evidently.

An email to Line Snob requesting comment was not returned by press time. 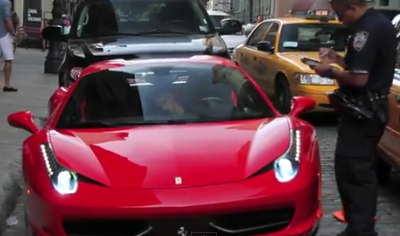