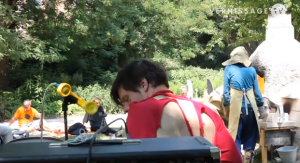 Gallerist hears that Japanther, the band and performance art project started by Matt Reilly and Ian Vanek while students at Pratt, will be performing in conjunction with the opening of Gelitin’s show at Greene Naftali on Sept. 13. Japanther’s performance, which will take place at a location as of yet TBA, should be a delightfully rowdy welcome for the Austrian art collective, whose last show at the gallery involved them creating a messy colorful sculpture installation while blindfolded and half-naked.

This isn’t the first time that Japanther has collaborated with Gelitin. They performed during the preview days of the 2011 Venice Biennale at the Gelitin Pavilion, a site-specific installation by the group that featured a wood-fired furnace in which they transformed bottles into a hunk of melted glass.

Here’s the video of that performance:

As of yet, what specifically they’ll be unveiling at the gallery is under wraps, but there will be a large-scale interactive piece. Otherwise, it will be much in line with their previous work, we’re told, which we took to mean that it will be messy and that the members of Gelitin will probably be naked for a part of the time.