If the cliche for actors used to be “But what I really want to do is direct,” then the updated version would be “But I really want to do is blog.” It makes sense. These people are already rich and famous: they can afford not getting paid, plus, it makes them look intellectual and proves that they are more than dancing little monkeys who can memorize dialogue and cry on cue.

The latest literary star in the making is The Social Network‘s Jesse Eisenberg (who has actually been writing one-offs for the site since 2009), who started his own whimsy-column back in May, “Bream Gives Me Hiccups: Restaurant Reviews From a privileged Nine-Year-Old.” Sounds adorable, right?

Bream is an ongoing series in which the child protagonist, dragged around by his bitter, alcoholic, divorced mother (maybe a callback to The Squid and the Whale?) is revealed over the course of time to not just be a little lord Fauntleroy about food–from their experience at an Iraqi restaurant: “When Mom and I tasted how normal it was, we looked at each other in a relieved way, like we were Matt’s brother and we had just come back from Iraq”– but possibly homosexual as well. And this is not done in a revelatory “A young child discovering his burgeoning sexuality” kind of way, but as a punchline to the icy mother’s frequent jabs at her fey son.

The most recent piece about TCBY finally pulls out all the stops when the protagonist’s off-mentioned friend Matthew comes along for the ride:

The woman behind the counter asked Matthew what he wanted for toppings and he said Blueberries and Cherries. And then the woman said, “You just want two fruits?” Then Mom said, “Yup! Two fruits for my two little fruits!” And then Mom laughed in a cackling way that made everyone uncomfortable. When Mom finally stopped laughing, she said, “Sorry, I just couldn’t help myself,” and then we felt uncomfortable again.

When the woman asked me what I wanted, I decided to get the same thing as Matthew because he thought about his order in such an interesting way.

After a few bites of the Mountain Blackberry Yogurt, I got a brain freeze and it hurt really bad. Mom said that brain freeze is not a real thing and that I should stop complaining but Matthew told me to relax and to put my tongue to the roof of my mouth and lick. He demonstrated by showing me his tongue licking the roof of his mouth and then he put my head back and told me to open my mouth. But when I opened my mouth with my head back, Mom got really frantic and said, “Jesus Christ you two, get a room!”

Matthew ordered a Mountain Blackberry Yogurt. He said that he got it because it’s the most interesting color, which is a kind of light purple, but which Matthew called “Mauve.” “Mauve” is a word I never heard before and hearing new words is one of the reasons I like Matthew. When I asked why he didn’t get the flavor he liked the most, he said he thought that all the flavors probably tasted the same and so it was best to get something that was “pretty to look at.” Mom rolled her eyes two times: when Matthew said “Mauve” and when Matthew said “pretty to look at.”

To be fair, the piece does try to explore some deeper themes in the context of how children relate to the world, and it might be considered more of a critique on the mother’s homophobia than the writer’s. But still, this is ranging into some pretty heavy terrain: Bream is at times uncomfortable and sad, like Roger Dodger. But the actor/writer does make an effort to identify with how this kid thinks, so he’s not exactly Daniel Tosh or Dane Cook here. It’s hard to know what to make of what Jesse Eisenberg is doing with his McSweeney’s column; what the larger contexts for these pieces will be, except maybe we don’t have to know and that’s okay too? Like it is written:

“So I guess Matthew is like TCBY because they both said they were the best at something even before the other person agreed. I know it sounds like Matthew and TCBY are trying to have relationships in reverse, but I like to think of everything happening together at the same time. 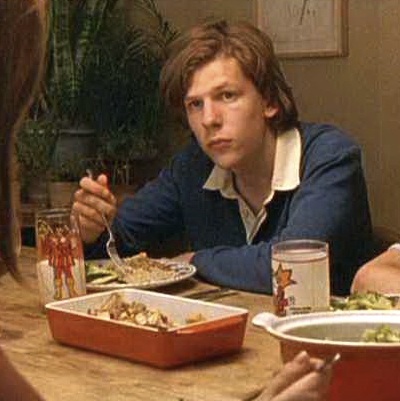