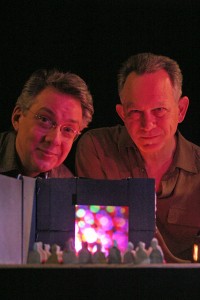 The Joshua Light Show, the psychedelic light show founded in 1967 by Joshua White, will have a four-night residency at NYU’s Skirball Center this September.

The Joshua Light Show had a roughly two-year stint at Bill Graham’s iconic Fillmore East venue in New York, providing improvised multimedia projections during performances by the Grateful Dead, Jimi Hendrix, Jefferson Airplane, Frank Zappa and others. We caught up with Mr. White and his collaborator Gary Panter in April to talk about their installation at Detroit’s Museum of Contemporary Art.

The lineup at Skirball is pretty intense. Have a look:

9/16: Debo Band & Forro in the Dark (in partnership with globalFEST)

The Joshua Light Show also provided visuals for Woodstock with its signature “liquid light,” though it turned out to not be that great of a gig: “It had no impact on the audience,” Mr. White told us in April. “It might as well have been a postage stamp.”

Tickets for the Skirball shows are available here.