We’re sure that Kansas City has its charms, but who can really blame Romeo Crennel for wanting to spend more time in Manhattan? The head coach of the Kansas City Chiefs is apparently hoping to escape the Show me State during the off season with the purchase of a new pied-a-terre on the Upper East Side.

Mr. Crennel and wife Rosemary tackled a 41st-floor condo at 200 East 89th Street, city records show, running away with the two-bedroom, two-bath pad for $1.27 million—a slight break on the asking price of $1.32 million. Although perhaps a discount was in order, considering that owner Michael Filomonov has been trying to sell the apartment for the last nine months.

The Crennels already own a small apartment in Murray Hill that they bought for $430,000 back in 2003. He was the defensive coordinator the New England Patriots at the time and hoping to land the head coach’s spot with the NY Giants after serving as an assistant and special coach in the past. Instead, Mr. Crennel ended up back in the Midwest—first Cleveland, then Missouri.

There’s no listing for the couple’s first apartment, but we’d guess the new space, listed with Prudential Douglas Elliman broker Heidi Berger, is an upgrade. At least it’s almost 20 floors higher than their last place and comes with not one, but two balconies, as well as “hardwood floors, unbelievable sunsets.” Bonus points: the building has a health club and a pool, so Mr. Crennel can work out at home. As long as his neighbors don’t ask him for weight lifting pointers or tips for beating their friends at touch football. 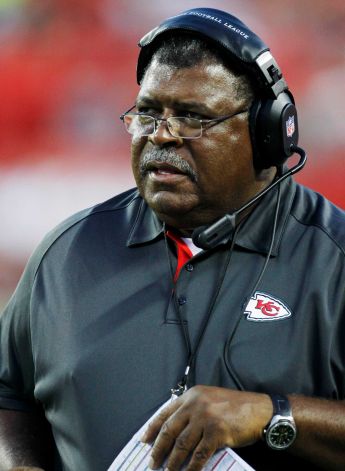