The one thing they don’t tell you about the RNC in the lame-stream media is how much fun all these guys have! It’s basically a week of comedy routines involving pretty transparently racist/sexist/homophobic humor; like a Dane Cook and Daniel Tosh special that just never ends.

Case in point: who knew that Karl Rove, former political strategist to President George W. Bush, was so good* at impressions? During today’s live interview with Politico’s Mike Allen, Mr. Rove did his best Ragin’ Cajun voice, which could give Saturday Night Live‘s Bill Hader’s James Carville routine a run for its money.

Karl Rove as Carville, whom he is besties with:
http://www.youtube.com/watch?feature=player_embedded&v=MovOe-bSpiU#!

Very subtle. “Bleh bleh bleh! Ableh bleh bleh!” It sounds like a middle schooler’s impression of the teacher who just gave them detention for blowing spitballs at nerds.

It might be more accurate, but come on, you know Mr. Rove nailed it. Maybe he can break his contract at Fox and start doing work for Lorne Michaels. 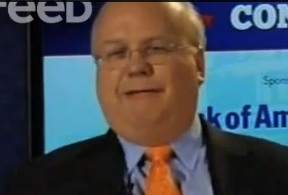