In the battleground state where New Jersey allies will make the hardest stand to re-elect the Democratic president, Lautenberg intends to give voice to his argument that Mitt Romney would be disastrous for middle-class families and particularly seniors — “raising taxes, cutting funding for veterans programs, ending Medicare as we know it, and putting good education out of reach for millions, all to pay for tax breaks for millionaires and billionaires,” according to the Obama Campaign.

Romney’s selection of U.S. Rep. Paul Ryan (D-Wis.) as his vice presidential running mate simply doubles down on his plan to weaken Pennsylvania’s seniors’ Medicare to help pay for his $5 trillion in tax cuts for the wealthiest, said the campaign. Lautenberg fears a Romney-Ryan administration would turn Medicare into a voucher program, pushing seniors who rely on Medicare into the private market and raising their costs by $6,350 a year.

Accompanying other elected officials, Lautenberg plans to appear on the steps of the Montgomery County Courthouse in Norristown, Pa., at 12:30 p.m. 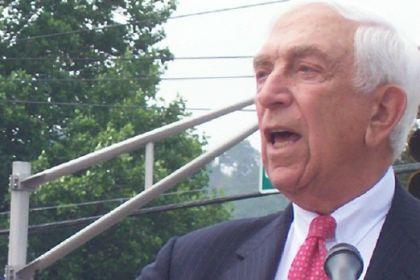