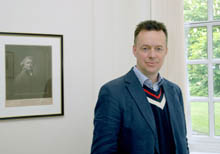 Over strong tea and scones with clotted cream at the London hotel in Midtown, we learned that Brian Allen, the director of studies at the Paul Mellon Centre for Studies in British Art, is retiring after 20 years in that position and 36 years on staff at the PMC. Mr. Allen will be succeeded by Mark Hallet whose role will begin on Oct. 1, 2012.

“I have no doubt that the transition from Brian Allen’s many years of extraordinary leadership in the field of British art to an exciting new chapter in the promotion of the field will be seamless,” said Amy Meyers, who gave the opening remarks at a press preview this afternoon for the upcoming shows at the Yale Center for British Art, a sister institution to the PMC. As the PMC’s executive officer, Ms. Meyers led the search for the new director.

Mark Hallett comes to the PMC from the University of York where he has been head of the History of Art Department and professor of the history of art since 2006. For the past four years has served on the advisory council for the PMC.

And we learned about all this before diving into the upcoming shows at the Yale Center for British Art involving Constable’s cloud studies, the capture of the Westmorland and Edwardian opulence, about which, more later. It was a rich afternoon. Congratulations to Mr. Hallett.